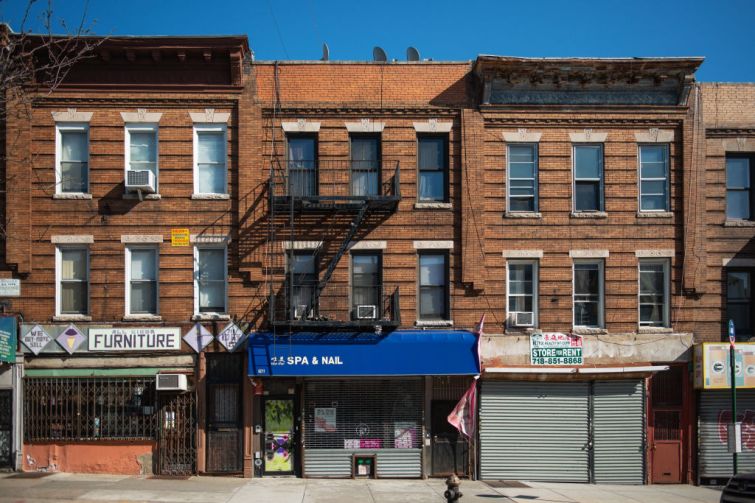 A survey from the Brooklyn Chamber of Commerce found that 84 percent of eligible small businesses in the borough failed to get federal coronavirus stimulus loans. Photo: Aidan Loughran/NurPhoto via Getty Images

The federal loan program aimed at allowing small businesses to keep employees on the payroll and stay afloat during the coronavirus pandemic has failed to help many Brooklyn establishments, a new survey found.

A survey conducted by the Brooklyn Chamber of Commerce of 281 small businesses in the borough found that 84 percent of the ones who applied for the loan, called the Paycheck Protection Program (PPP) which ran out of funds last week, did not receive any money as of April 17.

Of the businesses in the survey that applied, 90 percent of the ones owned by minorities and women did not get any funds, according to the Brooklyn Chamber of Commerce.

“These programs are steps in the right direction,” Randy Peers, the president and CEO of the Brooklyn Chamber of Commerce, said in a statement. “But it has been made abundantly clear they are underfunded, and lean toward benefiting larger, well-established businesses with existing ties to lenders, limiting resources that small businesses and [minority- and women-owned businesses] urgently need to survive.”

Juan Montini, the owner of MpBarcelona in Williamsburg, Brooklyn, which designs products for museum gift shops, said he applied for the PPP hoping to get enough money to keep his four employees on the payroll for the next few months. Without the grant, he only has enough money left to pay staff for three or four weeks.

“I’m debating, should I let them go now and give them the chance to apply [for unemployment] or just wait for the PPP and see if we can ride this wave together?” he said. “It feels like the whole system was totally a catastrophe.”

The PPP was passed late last month as part of the Coronavirus Aid, Relief and Economic Security (CARES) Act to provide up to $359 billion in forgivable loans to small businesses that maintain 75 percent of its staff. A business could receive up to $10 million that can be given if mainly used to pay employees.

However, the loan program was criticized by many in the restaurant industry — reeling as emergency measures to stop the spread of COVID-19 forced them to shutter — over fears that it would dry up too quickly and complaints that large restaurant chains could qualify for the loans. Chef Tom Colicchio, the owner of Crafted Hospitality who helped start the Independent Restaurant Coalition (IRC) pushing for changes to the program, said it was “insufficient to restaurants needs.”

The PPP ran out of money in less than two weeks, leaving Congress scrambling to come to a deal to add another $310 billion to the program, the Washington Post reported. However, high-valued chains gobbled up millions in grants since federal guidelines allowed business with 500 people per location to qualify for the loans, something the IRC has been pushing to change.

“I don’t need a million, I need only probably $60,000 to get by for the next few months,” Montini said. “How many businesses could they help with that money?”

All told, more than 70 publicly traded companies got money from the PPP before it ran out, Forbes reported.

The Brooklyn Chamber of Commerce’s survey found small businesses had trouble navigating the application process and did not receive the extra funds in time to make April’s rent. The report found that 44 percent of the survey establishments completely missed April’s rent while only 15 percent of landlords reduced or waived the payments.

Montini said the problem in his opinion was the application process was that banks ran it instead of the government. He spent days waiting for Capital One to allow him to apply online and didn’t get an email with the application back until after the money was gone.

“If you put banks in the middle they’re going to try to look better with customers who have more money in the bank,” Montini said. “It doesn’t matter if it’s a small business or not.”

To help, the Brooklyn Chamber of Commerce partnered with the Real Estate Board of New York, the New York City Hospitality Alliance and the New York State Restaurant Association to advocate for a series of changes to keep small businesses afloat.

These include adding more money to the PPP and letting business owners use a larger chunk of it on rent, forcing insurance companies to cover business interruptions caused by the coronavirus pandemic, converting sales tax into grants and to provide help to landlords to allow them to waive rent to commercial tenants.