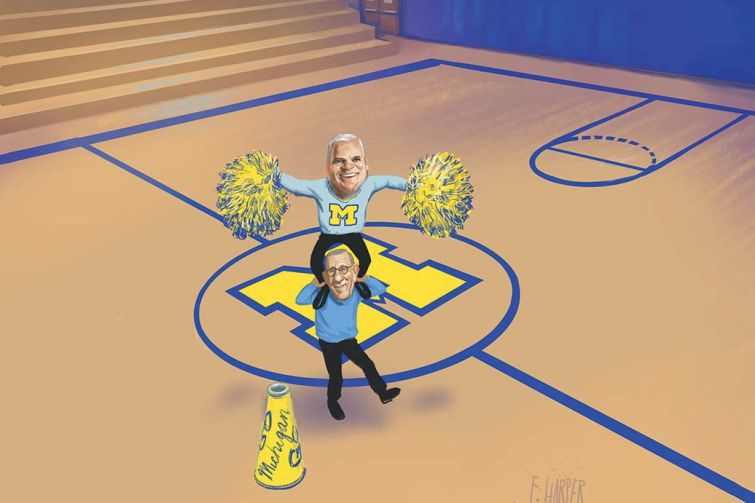 Stephen Ross is back.

The native Detroiter who made it big in New York City has returned to his hometown, bearing a gift of $100 million and a promise to build an innovation campus in the heart of the city.

Ross, the founder and chairman of Related Companies, one of the country’s largest real estate developers, grew up in a middle-class neighborhood in the city of Detroit, graduated from two of its universities, and then moved to New York for a finance job.

Before he left, he promised his uncle and mentor, oil tycoon Max Fisher, that he would be back. More than fifty years later, he’s making good on that promise.

The Detroit Center for Innovation, announced in 2019, is a collaboration between Ross, Detroit’s billionaire savior Dan Gilbert (founder of Quicken Loans) and Ross’s alma mater, University of Michigan. It will be a satellite campus for the university, which is located in Ann Arbor, offering graduate courses in a variety of high-tech sectors and integrated with the Detroit business community.

“Detroit is so primed to really regain its prominence as one of the great cities in the world,” Ross said while speaking at a February 21 event in Detroit hosted by Crain’s. “I think Detroit’s in a position to lead the way into the third industrial world revolution.”

The chosen site is a stretch of land on one of the main arteries leading into Downtown Detroit, which previously housed an abandoned county jail project, known locally as the “fail jail.” Gilbert, who owns large swaths of Downtown, made a deal to build the county a jail elsewhere, in exchange for the land, where he would build a mixed-use project.

“It’s the gateway to Detroit,” Matt Cullen, the CEO of Bedrock Detroit, Gilbert’s real estate company, told Commercial Observer. “It was a beat-up old hundred-year-old criminal justice complex, and then these abandoned construction projects, so it was a mess. Dan said, ‘Hey, I want to change that.’ ”

The project, which Gilbert has been championing for years, brings together Ross’ penchant for large mixed-use developments and his commitment to the University of Michigan, to which he’s donated over $300 million. Ross completed undergrad at Michigan and followed up with graduate studies at Wayne State University in downtown Detroit.

“We’ve been trying to recruit Stephen into Detroit, to develop and get active, for 10 years and the first nine-and-a-half he was like, “ ‘Yeah, I don’t think so,’ ” said Cullen.

Ross’ bet on the city comes at a moment when the cycle of disinvestment that has ravaged the city appears to have finally turned around.

Since emerging from bankruptcy in 2014 under a developer-friendly administration, Detroit’s commercial center has seen an influx of investment. All three auto companies have announced expansions or developments in the city; tech companies like Google, Twitter and Microsoft have set up shop; and Downtown is lined with swanky restaurants, hotels and condo developments.

Still, Detroit has a long way to go if it wants to compete nationally for jobs and talent, which has historically been a challenge.

Those are the two areas that the innovation center hopes to foster, by bringing the state’s most prestigious university within the borders of the city, and creating an interdisciplinary program focused on the industries of the future including mobility, cybersecurity, sustainability and artificial intelligence.

The idea for the innovation center came from Ross, who previously worked on Cornell Tech, a campus on Manhattan’s Roosevelt Island that similarly focuses on integrating the university with the business community in order to establish a pipeline for tech growth. That project demonstrated the economic development opportunities that arise from such a partnership.

“Seeing what was going on in Detroit, I thought this would work really well with the University of Michigan, being the world-class institution that it is,” Ross said at the Crain’s event.

And it squared well with Gilbert’s oft-repeated plea for Detroit to diversify its economy, to support its industrial sectors while expanding to the new, tech-based economy.

“We’re at the intersection of muscles and brains,” Gilbert said at the same event. “Detroit is at the perfect intersection. It’s got all the old-school people who built things with muscle and still do, and now the brain side is catching up.” It was Gilbert’s first appearance since suffering a stroke last May that has kept him out of the public sphere.

The 14-acre Detroit Center for Innovation will be anchored by a 190,000-square-foot academic building designed by Kohn Pederson Fox, and the campus will include housing, offices for startups and other tech companies, and a conference center where the school can host events. A historic building on the site, a former police headquarters, will be converted to a hotel.

The project is estimated to cost up to $750 million, with an initial $300 million to be raised from philanthropic sources in order to get the project off the ground, Ross said at the Crain’s event, and he will personally contribute the first $100 million. The academic building will be given to the University of Michigan, and the rest of the buildings will be owned by nonprofits, but will have some debt on them as well, per Ross.

Related will be the lead developer at no fee and will have a presence in Detroit to oversee it, but is not otherwise an investor in the project, a spokesperson for Related confirmed.

“Hopefully that will lead to a lot of future development in Detroit, but right now we’re really focusing on developing this,” Ross said.

Gilbert’s Bedrock owns the land for the site, which it received in a deal with Wayne County to develop a mixed-use project on the “fail jail” site and build a jail several miles north of the city. In the deal, Bedrock promised to invest $250 million into the site, though it has not confirmed how the money will be deployed. The innovation campus only takes up a portion of the site, and the exact dimension of the project are still being worked out, a spokesperson for Bedrock said

Another integral figure in the site’s development is Detroit Mayor Mike Duggan, who has been a vocal supporter and active participant in the project, but there are no public funds currently earmarked for the project.

Finally, Ross brought on the University of Michigan. “Mayor Duggan and Steve Ross approached us and said, ‘Hey look, we’re conceptualizing an innovation center in Downtown Detroit with Michigan as an academic anchor. Are you interested?’ ” the school’s president, Mark Schlissel, told CO.

For Schlissel, it was an opportunity to leverage the Michigan name to make a difference in Detroit. While the school, located about 40 miles west of Detroit, has multiple initiatives in the city, this will be its first large-scale commitment to the area’s urban center.

“This is the newest component in that relationship, and it’s designed to help drive the Detroit economy, the entrepreneurial economy and the technology economy,” Schlissel said.

The new campus will serve up to 1,000 students and offer masters programs that are not available at the main campus in Ann Arbor, in high-tech disciplines like data science, fintech and artificial intelligence. It will be highly integrated with the local economy, with students working directly with businesses on real-world problems, said Schlisssel.

“Usually great universities, like Michigan or the Harvard-Yale-Stanford-Berkeleys of the world, teach students in a very theoretical framework and then they go off to the business world and businesses train them however they like. We’d like to develop the curricula at this new Detroit Center for Innovation in direct collaboration with these major employers.”

An academic component could be crucial to catalyzing Detroit’s tech economy as it attempts to compete with cities across the country. A report by the Brookings Institute found that tech jobs tend to gravitate to existing coastal hubs, like Silicon Valley, Seattle and Boston, to the detriment of other cities.

“Our research shows that a narrow elite of often coastal big tech hubs is pulling [talent] away from the rest of the nation, so that’s a real problem,” said Mark Muro, one of the authors of the report. “It could limit the ability of heartland cities to truly gain real traction.”

But an analysis by Bloomberg found that smaller tech hubs, primarily those anchored by a university, are thriving as well. Ann Arbor was identified as the third-fastest-growing tech hub in the analysis, thanks to the University of Michigan. The city followed on the heels of San Jose in Silicon Valley and Boulder, Colorado, home to the University of Colorado.

Muro confirmed that universities are integral to an innovation economy: “Universities are one of the crucial anchors of the kind of high-tech growth that remains hopeful for the country,” he said. “They’re sources of talent, they’re concentrations of [research and development], and they’re hubs that spin out [intellectual property] and can lead to startups.”

The presence of the University of Michigan in a sizeable, dense and diverse city like Detroit is a recipe for growth, Muro said. The report identifies Detroit as a potential center for growth and recommends a federal initiative that will help heartland cities compete for coastal talent.

Schlissel said that Detroit had a competitive advantage because of its low cost of living, and access to a diverse population.

“Detroit has room; Detroit has land,” he said. “I think as the economy of the United States grows and diversifies, different parts of the country will have to develop these centers of innovation or excellence. And I think Detroit is as well set up as anywhere in the middle part of the country to be that place.”

Of the school’s areas of focus, one will be mobility, which is in keeping with Detroit’s history as the Motor City, as well as its current growth as a center for mobility technology.

In 2018, Ford announced plans to build an engineering center for autonomous and electric vehicles in Corktown, a neighborhood just west of downtown Detroit, and anchored by the long-neglected Michigan Central Station. Ford purchased the handsome 1920s era station, which had been abandoned since the eighties, and had long served as a symbol of Detroit’s dizzying decline.

In addition, Google’s autonomous driving arm Waymo has a plant in Detroit, Chrysler is expanding its facility on the east side of the city, and GM announced in January that it would expand its Detroit-Hamtramck plant where it plans to produce electric and autonomous vehicles.

Harrison West, a JLL analyst, said the development was a step forward for the city: “It’s filling a void for a major university having a large presence, to get grad students involved with the auto industry,” he said. “It’s something that could have been here before now.”