Lame Duck: How Will Bill de Blasio Fill the Next 22 Months?

A mayoralty that began with great ambitions is now seeing the end coming. Can Bill de Blasio still do something great? 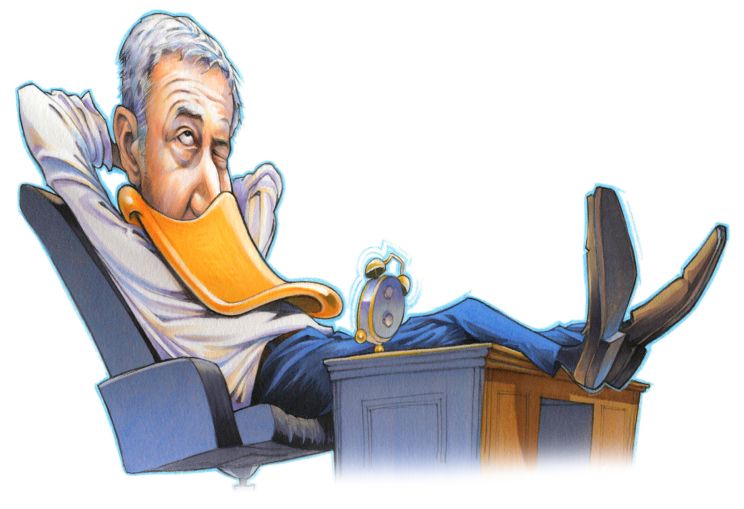 What will Bill De Blasio do for the next 22 months? Illustration: Bruce MacPherson

For the past several weeks, New York City Mayor Bill de Blasio has been doing something unusual.

He has held frequent press briefings about the city’s response to a rapidly evolving pandemic, given detailed updates announcing new cases of patients with the coronavirus as soon as he had information to share, and urged New Yorkers not to panic and to take precautions that can limit the spread of the virus.

“Some of the things we’re learning tell us a lot, that actually people can change the trajectory of this disease — smart hygiene,” de Blasio told MSNBC on March 11. “Folks who are most vulnerable, over 50 [or] with those serious preexisting conditions taking smart precautions, people changing their patterns to avoid those most crowded areas — not avoid everything, but avoid the situations where you’re literally pressed up against your fellow human beings, like a crowded subway train. People have a lot more agency in this that is being recognized.”

The mayor has been working in uneasy coordination with New York Governor Andrew Cuomo to mitigate the threat of a viral outbreak that scientists still don’t completely understand. Decisions to close public schools, cancel large events, and restrict travel weigh heavily on the mayor, who knows that he may soon have to disrupt daily life significantly in order to preserve public health and keep health care facilities from being overwhelmed. After days of intense pressure from city lawmakers and union leaders, de Blasio on Sunday shut down public schools and prepared an executive order to close bars, restaurants, theaters, and concert venues on Monday.

De Blasio’s experience calming a jittery public over the 2014 Ebola outbreak was a highlight of his administration’s managerial prowess, but the current crisis is of a magnitude not seen in a century, and it could shape both his and the governor’s legacies.

Cases of COVID-19, the disease caused by the novel coronavirus, in New York State and New York City have risen steadily, to more than 400, as of Friday, per the New York Times.

De Blasio made sure to criticize incompetent White House officials for their inadequate and inconsistent guidance and information offered to the public as well as the delays in getting test kits to the city.

“After weeks of minimizing what has now become a global pandemic, we were hoping for concerted action. Instead, the president remains all but silent on the most important thing: rapid, expansive testing,” de Blasio said in a statement Wednesday night after President Trump’s address to the nation. “Our ‘leader’ is more preoccupied with who to blame than how to protect people now that it’s in our communities.”

But New Yorkers could be forgiven for wondering where this de Blasio has been over the past two years. Two weeks after his anti-climactic re-election victory in 2017, in which a mere 14 percent of registered voters bothered to vote for him, de Blasio publicly set his sights on his next challenge — how to get out of Gracie Mansion and move into the White House.

The mayor announced he would visit Iowa in December to headline a progressive group’s fundraiser but insisted he was not running for president and defended the trip in a self-published Medium post saying he wanted to use the bully pulpit of the mayor’s office to advocate against Trump’s tax proposal, protect the Affordable Care Act, and upend federal policies that block the fight against climate change.

“This is what I feel called to do, and I’m going to do this kind of thing wherever possible, whenever possible,” he told reporters in Des Moines.

The mayor’s continued interest in presidential politics — and disinterest with the fairly challenging job he already had — soured New Yorkers.

“He said he’d be as good a manager as Mike Bloomberg and he was not,” political consultant Hank Sheinkopf said. “After [de Blasio] announced his candidacy, he disappeared and went to run for president. He didn’t go to work often and he lost whatever touch he had with average New Yorkers.”

De Blasio’s favorability hovered just under 50 percent, already a troubling sign, in a March 2018 Quinnipiac poll. A couple months after finally declaring for the Democratic primary in May 2019, his approval ratings halved to 26 percent.

Over the course of the month in which he announced his campaign bid, de Blasio spent only seven hours at City Hall, the New York Post found. When he returned back home, he still kept away from the office. He started every morning around 8 a.m., taking a 30-minute drive from the Upper East Side to the Park Slope YMCA where he exercised for two hours before arriving at City Hall close to 11 a.m.

It is unclear exactly when de Blasio became a lame duck mayor — and whether the current public health crisis could pull him out of it. He still found time to exhort Massachusetts Senator Elizabeth Warren to endorse Bernie Sanders for president through Twitter, a move which raised hackles in Democratic circles.

“Respectfully, I think a lot of people would think dealing with the coronavirus is a full-time job for the Mayor of New York. Maybe stop telling a woman what to do and focus on that,” former Hillary Clinton aide Neera Tanden tweeted.

The de Blasio administration has put forward an ambitious agenda for the final two years of his term in the meantime. He wants to substantially reduce homelessness, overhaul the property tax system, and improve police-community relations which have continued to degrade. The centerpiece of the mayor’s second-term agenda has been affordable housing, and the city remains on track to build and preserve 300,000 units of below-market-rate homes by 2026, per Curbed.

While the mayor was busy dabbling in national politics, Trump threatened to withhold federal funding for cities that protect undocumented immigrants, continued holding up on an environmental assessment for the crucial Gateway Tunnel project, and abruptly halted plans for a multibillion-dollar seawall that could have prevented flooding in Manhattan. Meanwhile, Cuomo is preparing to dump $1.1 billion in Medicaid costs onto the city while also asking the de Blasio administration to contribute $3 billion for the MTA’s capital plan and chip in tens of millions of dollars to federal programs for needy families, the MTA’s Access-A-Ride program, and additional school aid costs.

And that doesn’t account for unpredictable events like the pandemic currently leveling the global economy which could upend the city budget, exhaust health care facilities, and severely threaten New Yorkers’ daily lives.

There’s still time for the mayor to advance his agenda and cement his legacy but it’s running out.

“Many people have said to the administration, ‘We’re here to work hard but we’re not waiting until January 2022 to start,’ ” New York Building Congress president Carlo Scissura said. “People forget that some of our biggest projects were built in short periods of time. The Empire State Building was built in less than a year and a half, and the mayor has a full year and nine months left, so there’s a lot he can accomplish.”

The best place to start is the city budget, which is due July 1. So far, the mayor’s $95.3 billion budget proposal includes $106 million to help low-income New Yorkers afford subway fares, $98 million to make Brooklyn’s 4th Avenue safer, $12.9 million for NYCHA community centers, and $1.25 billion for the city’s reserves. But there aren’t any bold new initiatives in there like universal pre-K or a substantial investment in affordable housing.

“The mayor and his team should be laser-focused on the budget. They have two left,” former Bloomberg administration aide and consultant Menashe Shapiro said. “Even lame-duck mayors still have tremendous power over the budget and the mayor’s legacy will be largely informed by the financial situation the next mayor inherits and whether the city is on sound economic footing.”

But even if there are no new moonshot proposals on the horizon, the mayor has plenty of partially completed goals to shore up. De Blasio has recently demonstrated a hands-on focus toward reducing homelessness, which spiked at 79,000 homeless people in shelters and on the street last year. The city agreed to a plan that forces affordable housing developers to reserve 15 percent of units in new projects for the homeless, which could add about 1,000 new units per year. And the mayor has been interrogating administration officials across several departments in meetings about how outreach workers can get individuals to accept services, as well as working to provide beds in former convents.

Still, the city will have to show progress before housing advocates declare his efforts a success.

“He’s made almost no progress reducing the homeless numbers in the city,” said Jonathan Westin, executive director for New York Communities for Change and a one-time de Blasio ally who has been critical of the mayor’s housing plans. “I would love to see them take it seriously but, [in] the past six-and-a-half years, [he] has been willfully ignorant about what is causing homelessness and how we need to fight it.”

Spurring development throughout the city may be a more promising goal. The city reintroduced plans to develop 180 acres above the Sunnyside rail yards with a $14 billion deck that could ultimately lead to 12,000 units of below-market housing — although the realization of any project could be decades away, according to the Sunnyside Post. Brooklyn Borough President Eric Adams approved the city’s Industry City rezoning with a long list of conditions, as reported by the Brooklyn Paper. And Brooklyn Council members want city planners to provide commitments to refurbish three public housing developments before they will consider plans to rezone swaths of the Gowanus.

“If we can resolve issues around public housing, it remains a great opportunity,” Park Slope Councilman Brad Lander said. “We can’t create a fantastic new neighborhood with thousands of units of new housing and leave existing low-income residents of the Gowanus neighborhood in abominable condition.”

The mayor also has the ability to improve people’s daily lives through transportation by making streets safer and encouraging less driving. Decisions over how to refurbish the crumbling Brooklyn-Queens Expressway and speed up bus service loom. And, as per the Brooklyn Eagle, de Blasio wants to see his Brooklyn-Queens Connector streetcar take off before he leaves office and make the ferry system a true transit alternative across the five boroughs.

“The transportation planning that is going on can yield some great results and set up the next mayor to go in and say, we already have projects in the pipeline,” Scissura said. “Every mayor wants to leave the next mayor something they can run with.”

Yet 22 months is a long time to keep distractions at bay. De Blasio continues to take an intense interest in the 2020 presidential election, firing off tweets supporting Bernie Sanders and offering his analysis as a pundit on television. He’s also been quietly encouraged his wife Chirlane McCray’s ambitions to run for Brooklyn Borough President by hosting events with friends and donors this winter at Gracie Mansion and meeting with Brooklyn power brokers like Brooklyn Democratic Party attorney Frank Carone, according to the New York Times.

“This is a guy who is more comfortable campaigning than he is governing,” Brooklyn political consultant Lupe Todd said. “If anything, there might be a sense of jealousy where he wants to be on the campaign trail and he’ll have to go to work.”