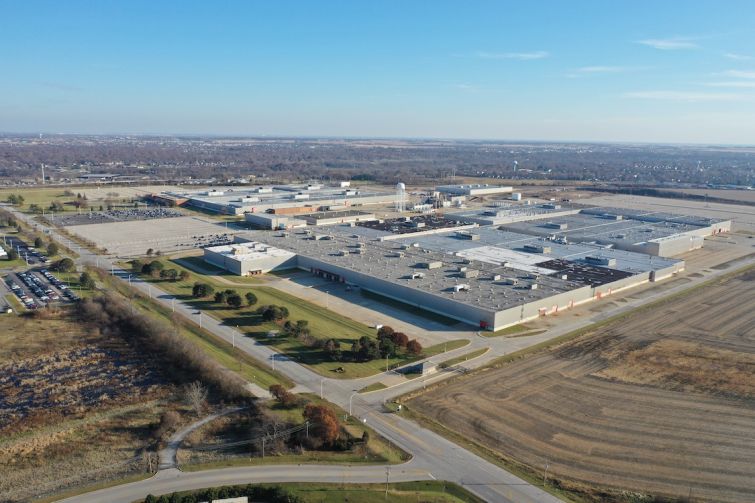 An aerial shot of The Grid at Route 31. Courtesy: HFZ Capital Group and Reich Brothers

The financing will cover the duo’s $68.5 million acquisition of the campus from construction machinery and equipment provider Caterpillar as well as a subsequent repositioning of the nearly 4.2-million-square-foot complex at 325 South Route 31 in Montgomery; it has been renamed The Grid at Route 31. The financing closed on March 20.

“Everything went smoothly,” Michael Reich, director of acquisitions at Reich Brothers, told CO. “It was before the effects of COVID-19 took shape in the U.S., so we didn’t really run into that that much, because it was in the periphery. From an acquisitions standpoint, the size of it, a vacant campus, was enough of a hurdle to [overcome].”

The size of the property allowed for the borrowers to plan for a renovation of each of the buildings on the campus for “modern day industrial uses,” outfitting them for individual use or for use by multiple tenants.

“What’s been interesting to see since we’ve closed on this is — as well as with the rest of the portfolio as the COVID-19 situation has gotten worse and more dramatic — we have continued to see interest in leasing activity from prospective tenants,” HFZ head of acquisitions, Adam Feldman, told CO. “Many of the companies we’re dealing with are planning their operations under the assumption that once the tough phase of this passes, they’ll continue on and hopefully get back to business as usual. We’ve executed some long-term leases recently, and specific to this asset class, in spite of everything, there seems to be some positive signs and activity.”

Reich added: “We’re seeing, generally, that there’s definitely going to be a push to reconfigure supply chains and manufacturing domestically [due to COVID-19], so we can capitalize, especially with a campus like this. [We had a] tissue paper company tour it a couple weeks ago, so there’s essential businesses out there right now that are not only operating but booming.”

The 350-acre campus used to be the headquarters for Caterpillar. The company had once employed around 5,500 people at the site during “peak production,” according to information from Reich Brothers; it had been utilized as the home of Caterpillar’s manufacturing operations.

Due to its past use, the complex features large concrete pads and a suite of heavy utility infrastructure, including a cogeneration facility (for self-generating power); it also has an on-site water reservoir, with three deep wells, and a 300,000-gallon water tower that services the site’s water needs as well as a water treatment plant. There’s also a helipad and 3,750 parking spaces across four lots, according to Reich Brothers.

The site includes three buildings that each span over 900,000 square feet, with ceilings heights up to 38 feet, as per information from Reich.

Reich said the goal of the repositioning effort is to transform it into a multi-tenant business park setting, separating the in-place utility infrastructure to serve a variety of tenants. Reich will be upgrading the utilities on-site, modernizing the infrastructure and bringing it up to code.

“Ultimately, as we approach each building, [we’re going to work with] architects on how to separate each building and rework them for multiple tenants,” Reich said, adding that the firm will be doing some “basic cosmetic work … upgrading the roof systems and things of that nature”

“[The site is] a great plug-and-play for multiple companies,” Reich said.

It’s located within 42 miles of Chicago’s O’Hare International Airport and about 47 miles from the city’s downtown, and it’s just a few miles from major highway and interstate arteries. According to Reich Brothers, its location means that it can reach around a quarter of the country’s population within one-day delivery.

HFZ and Reich Brothers — a firm with over 25 years of experience investing in and repositioning industrial and logistics facilities across the country — formed their partnership near the end of 2018, according to Feldman.

Since then, their platform has acquired approximately 11 million square feet worth of industrial property, which has included distribution, warehouse, manufacturing and flexible office assets, according to information provided by HFZ and Reich.

Of the assets purchased by the joint venture, two are significant holdings in Wisconsin — a former Heinz Kraft-owned Oscar Mayer plant in Madison and a Caterpillar global mining campus in Milwaukee. Other purchases have been made in Nashville, Buffalo, Columbus, Ohio and in the Orlando, Fla., area, among others. The duo recently closed on a roughly 2-million-square-foot former Sears distribution center located just outside of Orlando.

An official at Ladder Capital did not immediately respond to an inquiry.

This story has been updated to include commentary and additional information from officials at HFZ and Reich Brothers.