All Aboard: Transit-Oriented Development Is Expanding Miami

In Florida’s biggest metro area, developers are using sites close to transit to push the limits of the city’s commercial market. 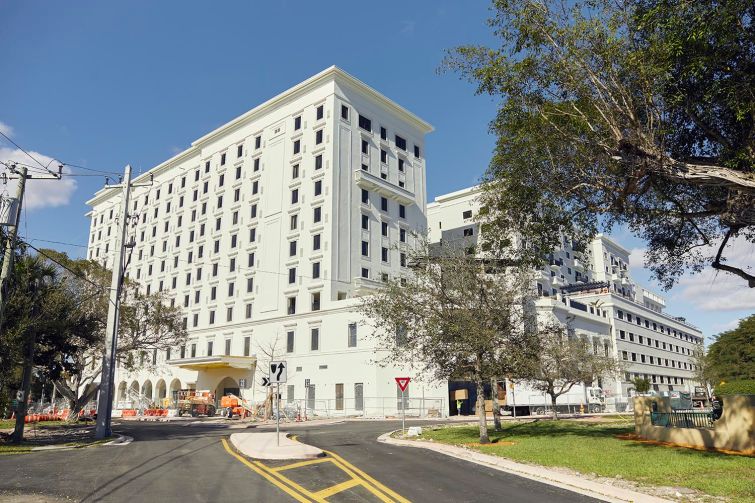 Nolan Reynolds International’s Paseo de la Riviera project is a $225 million mixed-use development under construction situated across from the University of Miami campus. Part hotel and part apartment building, the project is the first of its kind in the area. Mary Beth Koeth/for Commercial Observer

Driving through Coral Gables, the enclave about five miles west of Downtown Miami that’s home to the University of Miami, afternoon traffic was light from the vantage of Brent Reynolds’ Land Rover: a far cry from the clogged highways you’ll find in the city during the morning and evening rushes. But driving is still often the best option in a city whose public transit has yet to blossom.

Last year, Miami was tied with Los Angeles for the worst average public-transit commute time in America, at 56 minutes, according to Moovit, a commute-planning app. And nearly 12 percent of the city’s public transit commuters have to spend more than two hours each way getting to and from work, another national worst.

Still, as Miami works to morph into a more transit-friendly metropolis, Reynolds is part of a growing share of developers who are betting that building near train stations will make their projects central patches in the city’s quilt.

“The one thing that Florida was missing was dense residential development,” Reynolds said, as we drove south from the Coral Gables offices of his development company, Nolan Reynolds International. “You didn’t have the ancillary infrastructure to support it, so it was a lot of empty units. Now the businesses and the social elements are filling in, so you’re getting a good balance. That’s creating a little bit more sustainable growth.”

Reynolds was taking Commercial Observer to Paseo de la Riviera, an approximately $225 million mixed-use development that NRI is finishing up just across U.S. 1 highway from the University of Miami campus. Part hotel and part apartment building, the 10-story building is a double first-of-its-kind. For one thing, there are precious few apartment buildings of any height nearby. The hotel component is slated to be the launch vehicle for NRI’s Thesis brand, which the company hopes to expand to other states if the debut is successful.

But in another sense, the project, slated to open in March, is part of a trend that’s transforming Miami’s urban geography: transit-oriented development. The two-building complex is steps from a station on Miami’s elevated MetroRail system. The train system connects Coral Gables to Brickell, a Downtown financial and shopping center, in about 15 minutes. In rush hour, the drive could take more than twice that long.

A slew of Miami’s most ambitious new development projects launched in recent years have striven to take up the same mantle. Elsewhere along U.S. 1, 13th Floor Investments and Adler Group are at work on the Link at Douglas, a seven-acre site that will include two rental buildings totaling 733 apartments. That project is also adjacent to a MetroRail station. Just last week, the developers got a $99 million financing package from Banco Santander and TD Bank to fund construction of the second of the two towers.

Meanwhile, to the northeast, Terra Group and Grass River Property are building a transit-connected mixed-use development called Grove Central, adjacent to the Coconut Grove station on the MetroRail. That project will add 883,000 square feet to the office, retail and residential markets when it’s completed next year, including a 23-story office tower, a shopping center and more than 300 apartments.

One impetus behind the development push is an influx of prosperous companies to the city that is altering Miami’s economic landscape. Carl Icahn, a previously New York-based billionaire investor who runs Icahn Enterprises, decided last year to pack up for South Florida, the New York Post reported in September. The year prior, two of the founders of I Squared Capital, a big private-equity firm, left the Northeast for Miami. And one of the industry’s most prolific investment companies, Starwood Capital Group, has moved its headquarters to the city, where it now employs 300 people. Two of its top executives, Barry Sternlicht and Jeff DiModica, are now Florida residents, according to a company spokesman.

One Miami-based capital-markets executive said that moves like that are a sign that the metro area of 6.2 million is reaching a turning point. The executive said he was especially excited to see a handful of hedge funds tearing away from the Northeast to set up shop in Miami. Financial companies are magnets for growth, he said because they spur demand in other industries. Every investor and developer, after all, needs a good lawyer, a good tax man, perhaps a marketing or public relations firm.

And, if they’re in the right line of work, scores and scores of construction workers.

Reynold’s Paseo project was teaming with them when CO visited, as laborers raced to finish landscaping the site’s courtyards and paint its hallways. The project has involved a team of 400 workers, Reynolds said, and the site’s configuration made it especially difficult to stage any of the work off-site.

“It’s been a scheduling and logistical quandary,” Reynolds said.

Indeed, development in the city is pushing the construction industry to its limits, he added, making it challenging to muster the number of workers needed to get a job to the finish line.

“I’m fighting all the time with the subcontractors to staff up,” Reynolds said. “It’s very prevalent in this market. There’s a lot of work [to be done], and not enough skilled labor.”

It helps that Reynolds has a background in construction management, having begun his career at Whiting-Turner Contracting Company in Baltimore. During the tour, he routinely obsessed over the smallest details. In one model apartment, he hollered to workers to make sure that a small area of carpeting would be vacuumed before the space would be shown commercially. Elsewhere, in a vestibule near the elevators, he fretted with workers over the temporary placement of small electronic locks on doors that led to a hallway.

That fine-grained approach has impressed the Paseo’s investors. Dennis Schuh, the chief originations officer at Starwood Property Trust — Starwood Capital’s lending subsidiary — said that Reynolds’ engineering know-how helped his team get comfortable with the project, for which Starwood contributed a mezzanine loan to the overall $145 million financing.

“His passion comes through in spades on the project,” Schuh said. “He’s incredibly curious and asks a ton of questions. From the quality of construction and how well the site is run, it’s very evident.”

Those factors helped the duo move past a central difficulty in getting any relatively novel project financed with a dearth of possible comparisons to other like-minded developments nearby. Lenders love strong comps — case studies of similar properties nearby a proposed project that have performed well. But Bank OZK and Starwood didn’t have the luxury of that sort of reassurance. On the other hand, Starwood found encouragement in the performance of the lot’s previous occupant: an outdated Holiday Inn hotel that consistently made money despite showing its age.

“This might have been one of the oldest Holiday Inns in the country,” Schuh said. “It ran at a super high occupancy and it did pretty well in terms of [room] rates, even though it was super old. It did so well because of this location.”

Across a central, open-air common space from the hotel, another tower will host 204 rental apartments arranged around a central courtyard. The offerings are likely to be outside the budget of most university students. Rather, they’ll be pitched towards professors, university administrators and maybe — just maybe — commuters who could rely on the MetroRail to get them to work Downtown.

“There’s obviously a heavy student population, given the university,” Reynolds said. “A lot of people throw up multifamily around a university and go for the undergraduates, but there’s a lot of other opportunities within a university. You’ve got graduate students, young professionals, and, like in this case where there’s a medical center, nurses and doctors.”

Even as Paseo and another in-progress NRI development nearby — Gables Station — are helping to change the face of the city, the changes that Miami is going through are also helping Reynolds’ company grow. Having access to more local capital and expertise than ever before has made finding investors and partners smoother than it would have been in the past.

“It’s been very helpful to get that local understanding — what can work and what can’t,” Reynolds said. “You go to an underwriter in New York and you tell them [Paseo’s] cost per key, they’re going to freak out. But if it’s somewhere down here who understands the market, they just get it.”

Najam Syed, the head of asset management for South Florida’s 2-year-old Brightine railroad, has been paying attention to that evolution too. The train service, which will be known as Virgin Trains starting later this year after a big investment from Virgin magnate Richard Branson, started running two years ago between Miami and West Palm Beach, about 70 miles north. Service between the two terminals takes about an hour and a quarter and costs about $20. A planned expansion will continue northwest to Orlando.

But Syed’s role is to manage the real estate that the railroad owns around its depots. Last month, he presided over the leasing launch of the luxury apartment towers that rise above its Miami station, just north of Downtown.

The twin 30-story buildings’ 816 apartments will make as much sense for Miami workers as for long-distance commuters who might trek north to Fort Lauderdale or West Palm Beach to earn a living.

“The definition of central business district is changing,” Syed said. “There are a lot of corporate headquarters now in Boca [Raton] and Fort Lauderdale, which creates economic fluidity. People are able to live in our building, hop on the train in the morning, go to work in Fort Lauderdale, and come back every night.”

The same goes for southbound commuters. Syed himself lives north of Miami, and had driven to work on the day that he spoke to Commercial Observer because he’d spent the day driving to meetings. But he said that he could see from his office window that as rush hour approached, Interstate 95 was clogged with traffic all the way to the horizon.

“I’ll be taking the train home tonight,” he said. For years, he added, developers have been “drinking the transit-oriented development Kool-Aid,” but only lately has the fruit of that work begun to shape the real estate market.

It may even be seeping into the cultural zeitgeist.

During last month’s Super Bowl, Fox Broadcasting Company ran a two-minute-plus commercial for The Guitar Hotel at Seminole Hard Rock, a snazzy new lodging in Davie, Fla., about 20 miles north of Miami. In the ad, Jennifer Lopez, who performed at the football game’s halftime show, had to race down to Miami from the hotel with her fiancé, Alex Rodriguez, after she was delayed by a would-be burglar. (The burglar, for some reason, was DJ Khaled, a multimillionaire.)

Given that the real-life half-time show started on schedule, Lopez apparently made it on time. There was no indication whether she’d arrived by car or train.