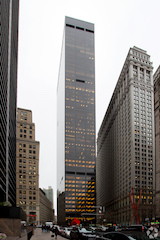 Pennsylvania-based trading firm Susquehanna International Group (SIG) — which in recent years built up a trading desk for cryptocurrencies like Bitcoin — will keep its New York City offices at 140 Broadway, Commercial Observer has learned.

SIG signed a 16-year renewal for 52,412 square feet in the 51-story Financial District building between Liberty and Cedar Streets, according to tenant brokers Newmark Knight Frank. Asking rent was in the low $80s per square foot, a source with knowledge of the deal said.

The firm — which has offices in Chicago, Sydney and Dublin — has been on the entire 47th and 48th floors of Union Investments’ 140 Broadway for a decade, according to the source. As part of its renewal, the landlord will upgrade the workplace and design of SIG’s offices, which require “significant upgrades.”

“We identified best-in-class properties that could support SIG’s footprint and its robust infrastructure needs,” NKF’s Brian Goldman, who worked on the deal with Ross Perlman, said in a statement. “We ultimately concluded that 140 Broadway could still deliver on those requirements but would require attractive economics to substantially renovate.”

Cushman & Wakefield’s Robert Constable brokered the deal for the landlord.

“For them to recommit was a testament to this building’s ability to satisfy a variety of requirements,” Constable said. “They had a lot of competitive options out there that they could have gone to … They’re a great name to have in the building and I think the building reflects that.”