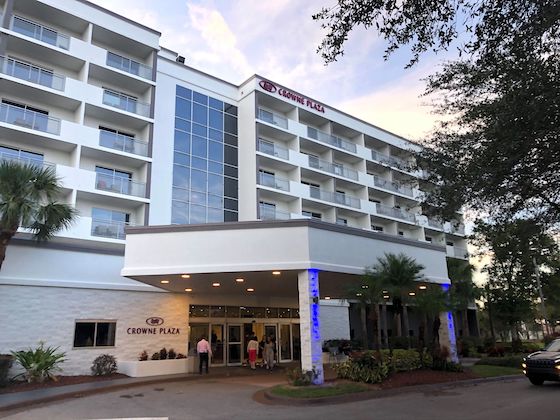 The three-year, floating-rate loan took out existing debt financing that had been used to convert the asset from a Comfort Inn to its current brand, coupled with a 20-year franchise agreement with InterContinental Hotels Group’s (IHG) Crowne Plaza Hotels & Resorts, sources told CO.

A representative for AD1 Global did not immediately respond to an inquiry.

“The basis well below replacement cost, coupled with an operator who has over 20 hotels under its ownership, were attractive factors to us when considering this refinancing opportunity,” Thorofare director of credit, Denis Barreto, Jr., said in a statement.

“Having recently undergone a transformative renovation, the property and its strategic location will continue to provide a destination experience for leisure and corporate business,” Kim said in prepared remarks.

The 200-key, full-service hotel — at 8686 Palm Parkway in Orlando — was renovated as part of its conversion that finished last May, according to a 2018 report from Marketwatch. It’s a “Disney Good Neighbor” hotel, which means it is partnered with Disney to provide perks and guest services for the resort.

“The hotel was able to perform well in the past and we believe it will continue to maintain high occupancy and compete on rate[s] given the transformational renovation that is now complete,” Barreto, Jr. said.

AD1 bought the six-story former Comfort Inn Lake Buena Vista as well as the Royal Parc Suites in Kissimmee, Fla. in 2017 for $33 million, with a plan to spend $13 million to renovate them and transition both to IHG brands Crowne Plaza and Staybridge Suites. The renovations started in August 2018, according to Marketwatch’s report, and wrapped the following summer.

The work included a floor-by-floor overhaul of the guest rooms as well as the common areas. The new Crowne Plaza saw the addition of a “splash pad” along with general upgrades to the pool area. The building’s facade was reworked, with new color schemes, and the balconies received perforated metal guardrails. The implementation of the upper-scale brand of IHG’s Crowne Plaza led to a redesign of the lobby and a repositioning of the breakfast kitchen space into a full-service bar and restaurant, as per Marketwatch’s report.

The asset is proximate to Orlando’s many entertainment attractions, including the headlining Walt Disney World Resort, which is about a mile away, and Epcot and SeaWorld, which are each about three miles away. Universal Orlando Studios Resort is nearly nine miles from the hotel.