The $2.5 billion mixed-use project is planned for the former National Lead site. 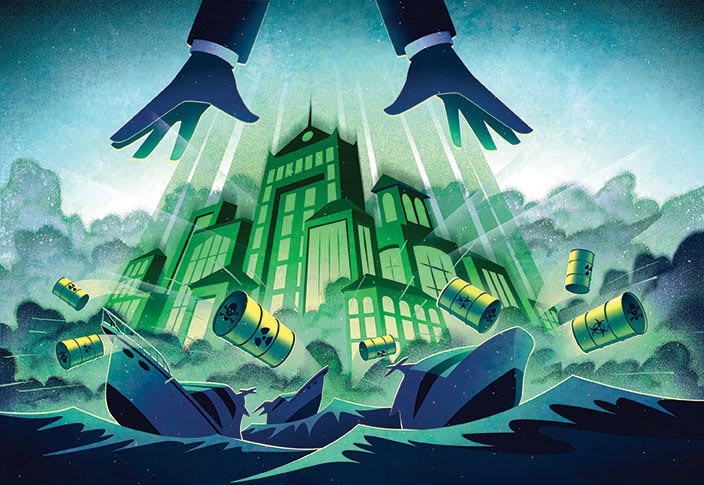 Hudson Yards has nothing on the mega-development planned across the river in New Jersey.

The Riverton development, more than 20 years in the making, is a 418-acre mixed-use village planned along the Jersey coast, at the former site of a National Lead Company manufacturing plant.

The vast site sits along two miles of the Raritan River in Sayreville, just south of Staten Island. The Garden State Parkway cuts right through it, making it accessible from one of the busiest traffic arteries in the Metro New York area, and familiar to the hundreds of thousands of drivers who pass it each day.

The $2.5 billion Riverton is the newest iteration of plans that date back to the late nineties, when local officials in Sayreville first targeted the waterfront site for development. Over the decades, the site went through several development deals, financing arrangements, and lawsuits over the remediation of the contaminated land.

The newest developers, the Atlanta-based North American Properties, joined the project in 2017 and introduced their vision for the site: a walkable urban town with plenty of open space and the live-work-play ethos popular in today’s planning community. The first phase of the seven-phase development was approved by the Sayreville planning board in December 2019, and the developers hope to put shovels in the ground this year.

“I’ve been waiting for this for over 20 years,” said planning board chairman Thomas Tighe at the December 10 meeting, where the first phase was approved.

The full scope of the seven-stage development calls for a hotel, a conference center, up to 2,000 apartments, 1.5 million square feet of retail, close to 2 million square feet of office space, and acres of public space, according to information from the architects, Cooper Robertson. Its centerpiece will be a 200-slip marina, with two miles of accessible waterfront.

The initial phase, approved by the board, includes a long-awaited Bass Pro Shops — which has been on the docket since 2011 — a hotel, movie theater, nearly 300 residential units and additional retail.

Before construction can move forward the developers will need to lock down public financing, including local subsidies and state funds through the New Jersey Economic Development Agency. In addition, as a designated brownfield area — a previously used industrial or commercial land now contaminated and subject to federal regulation — the site is under the supervision of various public agencies tasked with overseeing the site’s cleanup.

National Lead, as its name suggests, manufactured lead-based paints among many other products during its 250-year history. In the seventies the dangers of lead began to emerge and, in 1977, lead was banned in household paint and other items. The company changed its name to NL Industries, sold their iconic “Dutch Boy” brand to Sherwin-Williams, and shifted their focus away from lead-based production. By the eighties, they abandoned the paint manufacturing plants along the Raritan River.

The contaminated land lay fallow for decades. In the early aughts, the Sayreville Economic Redevelopment Agency acquired the designated brownfield site through eminent domain and demolished the long-abandoned factory buildings.

In 2008, they signed a development deal with the Sayreville Seaport Association (SSA), a joint venture between Prudential Investment Management, the majority partner, and the New Jersey-based O’Neill Property Group, which would be the lead developer on the site. The deal required the developers to remediate the site and designated the chunk of land east of the Garden State Parkway as a public greenspace.

Over the next decade, O’Neill introduced a $2.9 billion development plan for what was variously known as the Point, Luxury Point, and the Pointe with a similar array of mixed-use offerings as the current plan. In 2011, they announced their first anchor tenant, Bass Pro Shops, which would build a 200,000-square-foot site. In 2014, the NJEDA approved $223 million in state funds for the project, and in 2016, O’Neill continued to tout the imminent development of the land.

In the interim, the federal Environmental Protection Agency sued NL Industries for contaminating the coastal site, as well as dumping toxic material into the Raritan River. In 2014, the EPA won the case and NL Industries was fined $79 million to pay for the cleanup of the site.

The cleanup proved to be more difficult than the developers had realized, particularly a 40-acre lagoon where the Bass Pro Shop was to be located.

“We were unaware of the depth and consistency of the material that was in the lagoon,” Brian O’Neill Jr., who was managing the project, told the New York Times in 2016. “In some places it turned out to be 10 feet thick of this acidic paint-like substance, like quicksand.”

In 2017, Prudential brought in North American Properties to replace the O’Neill Property Group as the developers. The main update to the development plan was to scrap a planned mall and design a “walkable community,” in keeping with newer cultural expectations.

North American had previously designed Avalon, a large-scale development in Alpharetta, Georgia that similarly aimed to create a walkable urban village within a suburban enclave.

Before designing the town, Cooper Robertson, at North American’s behest, went on a discovery tour. They visited a wide variety of New Jersey coastal and inland towns, new waterfront developments like the Washington Harbor and The Yards near Washington, D.C., and other large-scale developments, to take the best of what those places had to offer and work it into the design.

“It’s about how do you physically craft a vibrant place, a genuine place?” said John Kirk, principal at Cooper Robertson, at the planning meeting.

In terms of the remediation, North American’s Polston said they were coordinating with the remediation efforts to prepare parts of the land for phase one. “Efforts are being wrapped up to prepare those areas from a remediation standpoint, to transition from remediation to development in 2020,” he told the planning board.

All the while, Bass Pro Shops has been fielding questions about its planned store. In a long-running Facebook thread that started in 2014, locals periodically check in with the shop for updates on their construction.

“Been waiting for this project over 5 years & all I see when I drive by is dirt,” wrote one commenter in 2017.

“We are proceeding with the development of this location, which at this time is in the early stages of site work and construction,” a representative for the shop responded.

Now, with the December approval, it’s one step closer to reality.