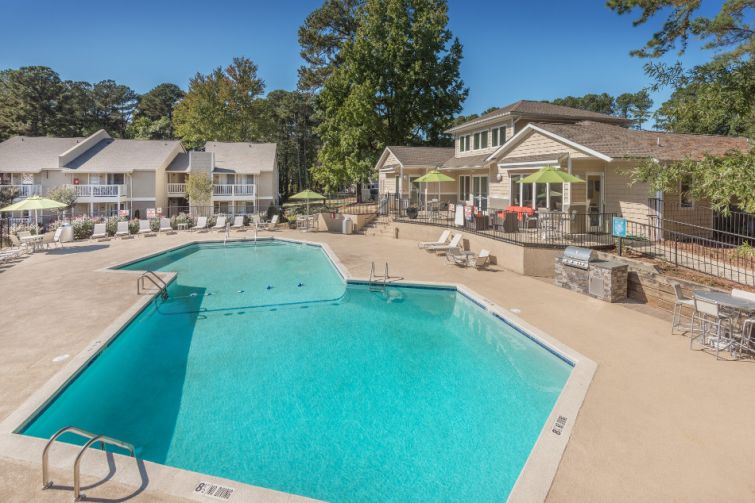 A shot of the pool area at the Hawthorne Six Forks rental complex in Raleigh, N.C. Courtesy: NKF

An NKF team led by Henry Stimler, along with Bill Weber and Nick Webb, originated the acquisition debt on behalf of Cedar Grove.

“This acquisition demonstrates the continued desire of investors looking to buy in the multifamily sector located in growing areas outside traditional primary investment markets,” Stimler said in prepared remarks, adding that it demonstrates NKF’s capabilities in the agency lending space, given the added layer of the preferred equity placement.

Built in 1982, the property — at 6317 Shanda Drive, just north of downtown Raleigh — features 42 three-story, garden-style rental buildings. There are 234 one-bedrooms, 186 two-bedrooms and 51 three-bedrooms, according to information from CoStar Group.

Amenities at the location include a clubhouse, an outdoor pool, a playground, barbecue and picnic areas, a leash-free dog park and a Starbucks coffee bar, according to Apartments.com. The residences include in-unit washer and dryers and balconies and patios, as per Apartments.com info.

Monthly rents range from $885 for one-bedroom units to $1,163 for three bedrooms, according to information from CoStar Group.

Officials at Cedar Grove Capital could not be reached. A representative of Related did not immediately respond to an inquiry.