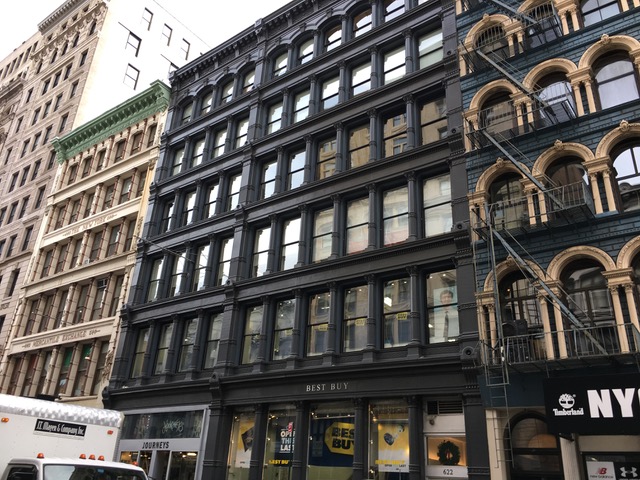 Yuco Management, a property company led by Raymond Yu, has pulled in a $63 million refinancing on a vintage mixed-use building it owns in the middle of Soho at 622 Broadway.

The financing was announced this morning by NorthMarq, the Minneapolis-based company that arranged the debt on behalf of Yuco. New York City Department of Finance records show that lender was Nationwide Life Insurance Company, an insurer headquartered in Columbus, Ohio.

The new deal refinances the $39 million outstanding balance of a Capital One debt package from 2012 that was originally worth $47 million, according to city records. Nationwide also chipped in $24 million in additional debt. The 12-year financing begins with three years of interest-only payments, after which Yuco will begin paying down principal on a 30-year amortization schedule, according to Northmarq.

National Life’s loan allows Yuco a one-time right to transfer the property. It’s also non-recourse, a feature that was especially important to the borrower, according to Charles Cotsalas, the Long Island-based Northmarq executive who led the deal.

“The borrower was extremely sensitive to any recourse and NorthMarq secured a non-recourse, entity only financing,” Cotsalas said in a statement.

Yuco bought the building for an undisclosed sum in 1982, when Yu’s father, Bong Yu, led the family firm. Erected a century earlier in 1882, the six-story building includes 112,000 square feet of rentable space, split between offices above street level and retail on the ground floor and below grade.

Take-Two Interactive, a video-game studio, signed a 10-year lease renewal for its office space in the building in 2012, Commercial Observer reported at the time. William Cohen, a Newmark Knight Frank broker who worked on that deal, said that Take-Two had made unorthodox use of some of its 69,000 square feet of leased space.

“They’ve got top-secret floors that you can’t get onto without a black hood over your head,” Cohen told Commercial Observer. “They’ve got floors where guys sit with the lights off staring at the monitors all day … There’s a lot of heavy-duty stuff, and it’s very secretive.”

The building’s retail component is split between Best Buy and Journeys, a footwear brand controlled by Genesco. Best Buy has 25,000 square feet, including a large basement space and a smaller street-level presence. Journeys has a small street level store.

NorthMarq touted the deal as a “significant cash-out despite multiple lease rolls and retail exposure.”

Representatives for NorthMarq, Yuco and National Life did not immediately respond to inquiries.