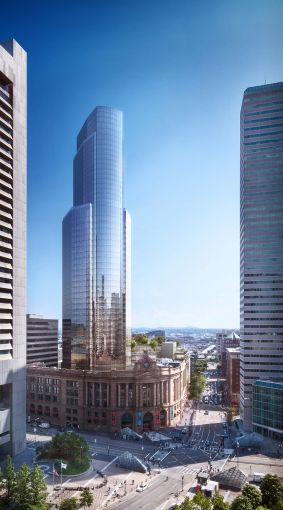 A rendering of the South Station development. Courtesy: JLL

A partnership trio led by Hines that is spearheading the massive 1.9-million-square-foot redevelopment of South Station in Boston’s Financial District has gotten $870 million in construction financing from London-based The Children’s Investment Fund (TCI) to build the first of three phases of the project.

Houston-based developer Hines, along with Dune Real Estate Partners and APG Groep NV (APG Asset Management), a Netherlands-based pension fund manager, will use the debt to construct approximately 660,000 rentable square feet of office and retail space, 166 residential condominiums and more than 500 parking spaces as part of phase one, according to information released today by brokerage house JLL, which was responsible for sourcing and arranging the loan from TCI. Officials at TCI could not immediately be reached.

A JLL Capital Markets team led by Riaz Cassum and Jennifer Keller arranged the debt financing on behalf of the borrowing party.

When finished, Boston’s heavily trafficked downtown transit hub will have been transformed into a 1.9-million-square-foot mixed-use development complete with a new, 1.2-million-square-foot, 51-story glass tower — designed by Pelli Clarke Pelli Architects — on top of the old station at 650 Atlantic Avenue, as per information from JLL. The trio of investors have targeted 2024 to deliver the project to market, without a tenant to anchor the office portion, nearly two decades after Hines first pitched plans for the mixed-use development. Local developer Suffolk Construction has been tapped as the general contractor.

The project’s office space will feature 26,000-square-foot floor plates, and that portion of the development will have a “sky lobby.” The residential aspect of the development will comprise studio, one-, two- and three-bedroom residences as well as penthouse duplexes that will be accessible via a private sky lobby, according to JLL; it will also sport an “urban sky park,” with outdoor space. Other amenities at the site include a conference center, a fitness center, a landscaped terrace, with an outdoor pool, and an on-site restaurant.

“Developments of this quality and magnitude arise infrequently in a mature market such as Boston,” Cassum said in prepared remarks. “The tower at South Station has an irreplaceable, transit-oriented location above one of our city’s busiest transportation hubs and will offer best-in-class office and residential space for discerning tenants and residents.”

The Boston Business Journal first reported in early January, citing Suffolk County public records, that the project’s investors had nabbed the financing to finally begin the project — although it didn’t identify the lender — and that they had also acquired $35.35 million in air rights from the Boston Redevelopment Authority to erect the tower.

“Today marks another milestone in the South Station Air Rights project and we are another step closer to construction, which will be starting in January,” Hines senior managing director David Perry said about the financing and air rights transaction in a Christmas Eve statement. “We are working closely with stakeholders to mitigate the impacts during this time of transition. As we prepare to break ground, we are implementing an in-depth communications and community engagement program to keep the public informed at every step forward.”

Last October, Dune and APG were brought in by Hines as investors in the project, signaling that its long-stalled construction was nearly ready to begin more than 13 years after the city had first approved its development, as The Boston Globe first reported that month; the Boston Planning & Development Agency, having owned a portion of the air rights at the location, and the Massachusetts Department of Transportation needed to to approve Dune and APG’s financial involvement and the engineering plans before construction work could begin, as per The Globe’s report. Dune and APG filled a void left by Chinese investor Gemdale Properties & Investment Corporation after it backed out of the project following a 2016 announcement of its partnership with Hines.