Getting Schooled by REBNY 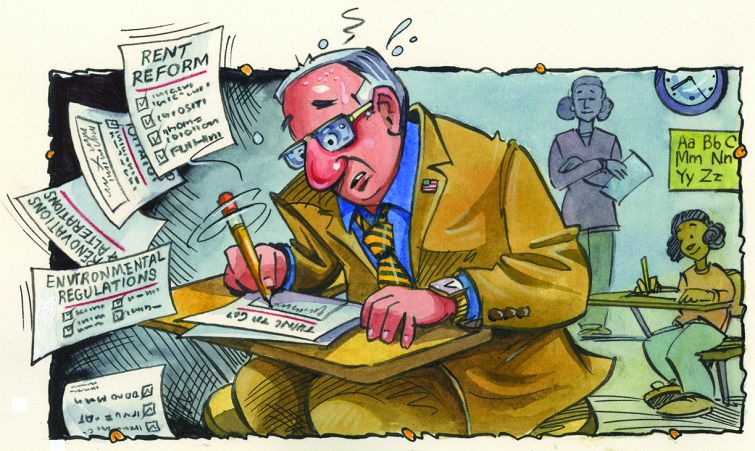 When New York State passed the Housing Stability and Tenant Protection Act of 2019 last June, many in real estate felt blindsided — especially when they learned that the law would take effect almost immediately.

The many requirements for owners and landlords — everything from rent collection to major capital improvements — changed massively with the signing of the new rent regulations. The seismic shift made access to information the most important resource for the industry.

That’s where the Real Estate Board of New York came in.

REBNY has long offered educational training to New York’s real estate community, with the classes helping to fill brokers’ educational requirements, set by the state at 22.5 hours of training completed every two years. Given the breadth of the changing laws, information was needed right away.

The new rent laws eliminated luxury deregulation and the ability to move rent-stabilized apartments into the free market, according to Sherwin Belkin, a founding partner at Belkin Burden Goldman, LLP who has long done work with REBNY.

“The law disincentivized improvement to both apartments and to buildings by dramatically reducing the monetary incentives for such improvements,” he said. “It also added a host of additional procedures and notices to bring the simplest of landlord-tenant proceedings, or even just to receive the monthly rent.”

Both REBNY and Belkin were immediately deluged with phone calls from worried owners and others in the industry, trying to make sense of the new regulations. While REBNY distributed a frequently asked questions memo to its members, they recognized the need for a larger educational effort, and recruited Belkin and his partners, Jeffrey Goldman and Kara Rakowski.

The trio hosted a REBNY seminar in July at Fordham Law School, where about 350 industry players converged for a two-hour seminar that covered the changing rent regulations followed by a lengthy question-and-answer session.

“We got questions involving management, ownership, what fees could be charged, how rents could be collected — the gamut,” Belkin said.

“Among the biggest concerns was [how the law would] impact work already in progress,” said Belkin. “So for example, when owners make improvements to rent-stabilized apartments prior to June 14, they were entitled to certain increases in rent. Post-June 14, those increases in rent were dramatically smaller. So there was a question of, ‘I began the work prior to June 14. I spent significant amounts of money. I haven’t leased the apartment yet. What happens?’ That was a constant question.” (Short answer: Nobody knows. “The law is unclear as to what happens to owners in the middle of work without a signed lease for the improved apartments,” Sherwin told Commercial Observer.)

“They also changed the total application fee that an owner could charge for an apartment to $20,” he said. “That’s less than it costs for an owner to run a credit check on a tenant. So owners were now asking, is that the total that I can charge as an application fee? The answer is yes. That question arose constantly.”

The demand-driven training is part of an acceleration in education efforts on REBNY’s behalf, with the organization launching 13 new courses in 2019, up from its usual two or so. In total, REBNY offered about 200 courses in 2019, both online and in-person that were attended by about 5,000 to 7,000 people on topics ranging from architecture and design to condos and negotiating sales, according to Sandhya Espitia, REBNY’s Senior VP for Brokerage Services, who oversees the organization’s educational efforts.

“We gather knowledge, needs, and a lot of feedback from members about what they want, and then we design new courses based on that demand,” Espitia said. “The most important thing is that the format is so easy from a consumption standpoint; courses go from two hours to three-and-a-half hours.”

One of the major course additions last year was “Creating and Capturing the Value of Real Estate Sustainability in NYC”, which was created in partnership with the Mayor’s Office of Sustainability, the New York State Energy Research and Development Authority, and the Environmental Defense Fund.

“A number of key stakeholders … were really looking to educate the brokerage community on how critical sustainability is to the city,” said Harry Etra, the CEO and Founder of HXE Partners and one of the course’s teachers. “There are varying levels of understanding around what Energy Star is, what LEED is, what Fitwel is — these different acronyms or stamps on buildings. When we get some of those questions, there is a proactive effort to educate the community and give them updates on what’s happening.”

Etra, who taught the course along with KO2 Consulting’s president Ozgem Ornektekin, said the content was developed collaboratively with REBNY, with the trade group recently hosting the course in the basement of its Manhattan office building.

Mark Brookes, a broker and partner at BNS Real Estate, attended the sustainability course in part to fulfill his broker requirements, but he’s also a fan of these sorts of classes for the focused learning environment and networking opportunities they provide.

“You’re going to meet some people, and you focus on the subject matter,” he said. “I’m not a great fan of online learning because there’s too many opportunities for distraction. Here, you come in and close the door, and they have good lecturers and good subjects. You have to do 22-and-a-half hours of education every two years. You might as well do it in the most informative and best setting possible.”

REBNY has an education committee that develops each year’s curriculum. Vickey Barron, Licensed Associate Real Estate Broker with Compass, is the committee’s co-chair, and spoke about the committee’s challenges.

“This is a real roll-up-your-sleeve working committee. We have to decide what curriculum is going to be most valuable to the members at any given time, and we have to forecast out six months in advance,” Barron said. “We spend a lot of time talking, because there are various firms represented on the committee, so we hear what they’re hearing at their firms, where we’re at in the market, and what could be most valuable on a level of education.”

By way of example, Barron describes a course she developed two years ago on renovations and getting through the alteration agreement.

“So many agents and brokers do not understand the vocabulary — something as simple as a load-bearing wall or what overdry is — and they also don’t understand the level of commitment from the buyer to get through an alteration agreement,” she said. “For example, if you were buying an apartment in a co-op and it was an estate sale, and you’re not going to sleep one night there until it’s renovated, they [might] have a two-year waiting list to start renovations. That’s valuable information. It’s really about educating the agents so they can better serve their clients.”

Another resource for members is REBNY’s Legal Line, a hotline hosted by attorney Neil Garfinkel where he answers around 10 phone calls a day from members with legal questions. Last year, he also partnered with REBNY to launch “Core Legal Concepts for the Successful Real Estate Agent,” a one-day course that gives brokers many of the basic legal tools they need to conduct their business.

“I believe that real estate brokers need a systematic way of conducting their business,” Garfinkel, a managing partner at the law firm Abrams, Garfinkel, Margolis, & Bergson and REBNY’s broker counsel, said. “They need checklists, templates, and forms so that they have a guideline, a system to follow as they do their transactions.”

Garfinkel and REBNY are preparing to launch a follow-up to the seminar, a web-based portal called “The Tool Box for Real Estate Agent Success.” The portal will follow up on some of the items taught in the course, such as the three essential agent questions (What kind of deal am I working on? Who am I representing? How am I getting paid?) and how that applies to things like agency disclosure, fair housing and protecting commissions.

“I would feel some frustration in that we have all these great classes, and brokers would walk out and think, having a really good checklist is a good idea, but then they wouldn’t carry through on it,” Garfinkel said. “So we decided to build this place, this portal, where they could find the checklists and the templates.”

The portal will also expand on the Legal Line hotline concept, where currently only one question per week is shared with the wider community.

“We built this core legal concepts portal around a community-based interface, so that if someone asks me a question as part of the community, not only will they get the answer, but then everyone else in the community will see how I answered that question and what resource I provided,” he said.

Garfinkel sees the value in these classes going far beyond legal requirements for all the ways they help attendees to better themselves.

“Real estate agents are expected to know so many things about so many different topics,” he said. “They’re required to know about fair housing, which could be very complex. But they’re also expected to be sociologists and divorce attorneys, with a crystal ball to be able to tell someone that this is the best place they’re ever going to find.”

That can be a tall order amid transactions that are often one of the more emotional, if not the most emotional transaction, that clients are involved in.

“Education is what separates a good agent from the best agents,” he said. “The best agents continue to better themselves.”