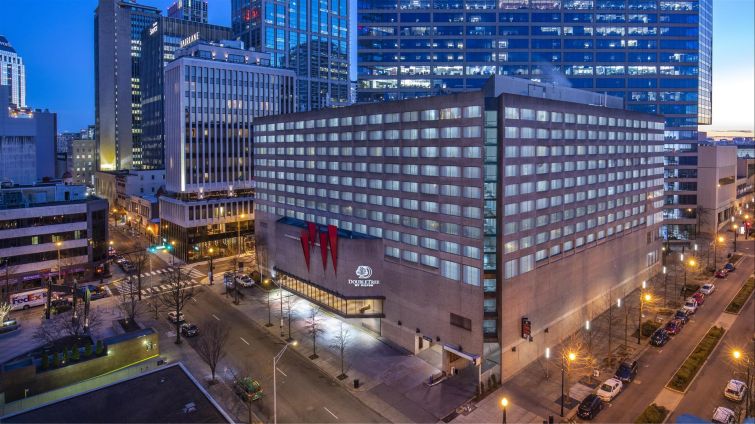 New York-based real estate investment firm AWH Partners, acting in a joint venture, got $81.4 million in debt financing from PNC Bank and CIT Bank to fund its recent purchase of the DoubleTree by Hilton Nashville Downtown, Commercial Observer has learned.

AWH, in partnership with Chicago-based The Inland Real Estate Group of Companies, secured the financing to fund its acquisition of the 341-key hotel at 315 4th Avenue North, which closed this month.

The hotel underwent a $5 million renovation in early 2019, according to information released by Hilton last April, and it now features an upgraded lobby and 20,000 square feet of meeting and event space, an indoor pool and the Fourth & U restaurant and bar. The asset also sports a fitness center, valet parking, and a Starbucks. Spire Hospitality, an affiliate of AWH, will manage the hotel.

Newmark Knight Frank (NKF) advised on the sale and the financing. An NKF debt and structured finance team led by Jordan Roeschlaub and Dustin Stolly — out of the firm’s New York office — along with Ben Greazel and Joel Simmons — out of the Chicago office — arranged the financing on behalf of the borrowers. Nick Scribani, Chris Kramer and Drew Ahlers in NKF’s New York office assisted in sourcing and arranging the debt that facilitated the purchase. The firm’s Mark Schoenholtz and Miles Spencer served as the advisors on the sale.

“We have been diligently watching Nashville for a fitting investment for some time,” Jon Rosenfeld, a co-founder and managing partner at AWH, said in a press release announcing the sale on Jan. 17. “Our team invested substantial time understanding the healthy pace of demand growth while also watching the recent, substantial supply growth in the destination. This vast hotel – fresh from a 2019 renovation and poised in the heart of the city – is an ideal investment for our portfolio, providing a great opportunity for current returns over a long-term hold.”

Execs pointed to Nashville’s recent boom in corporate relocations and expansions as a major driver of demand in the hotel market. Among the players making waves are Amazon, which is opening a downtown office next year; AllianceBernstein which relocated its headquarters to Nashville from Manhattan in 2018; and Philips, which added more than 1,000 jobs in the past year.

“This hotel is poised to benefit from this corporate growth, coupled with the alluring leisure draw of the downtown destination,” Chad Cooley, a co-founder and managing partner at AWH, said in the release.

The hotel is at the center of Nashville’s bustling downtown entertainment and nightlife scenes and near business and leisure travel demand drivers. It’s near attractions such as the Musicians Hall of Fame and Museum, Nashville Municipal Auditorium and the Tennessee Performing Arts Center. And it’s a few blocks from the Tennessee State Capitol building and downtown’s Broadway strip, which is chocked full of renowned Nashville bars and restaurants and is home to the Bridgestone Arena and the Ryman Auditorium.

The asset is also within walking distance of Nissan Stadium, the home of the National Football League’s Tennessee Titans; the stadium sits on the other side of the Cumberland River, which cuts directly through the city’s downtown.

Nashville saw a record 15.2 million visitors cycle through the city in 2018, up from 14.5 million in 2017, according to information from the Nashville Convention & Visitors Corporation. The jump was fueled by events such as the city’s New Year’s Eve and Fourth of July celebrations, its growing music and entertainment scene, and British Airways establishing a new non-stop flight from London, according to comments from then Mayor David Briley.

Adding to the travel fervor to the area, the city hosted its first NFL Draft last April, which drew thousands of fans to the city and its downtown on the Broadway strip, and then in July, Nissan Stadium played host to the CONCACAF Gold Cup international soccer competition.

Overall, the state’s tourism growth in 2018 outperformed the rest of the nation in areas such as generated tax revenue, expenditures, payroll and employment as it saw  a record $22 billion in domestic and international travel spending filter through to its coffers, according to information released in Aug. 2019 by the state’s Department of Tourist Development. Tennessee came in behind only Pennsylvania and Colorado in international spending growth from 2017 to 2018.

This story has been updated to include a comment from a PNC Bank representative.