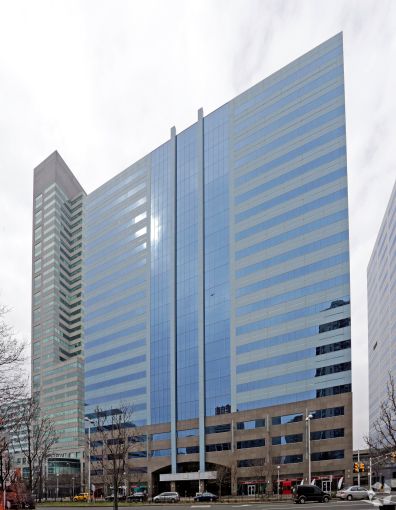 LeFrak Organization has closed on the sale of its Class A office property at 545 Washington Boulevard in Jersey City to Harbor Group International (HGI), multiple sources told Commercial Observer.

HGI paid $372 million for the waterfront asset, and the transaction closed on January 6.

Real Estate Alert first reported in September that HGI was in contract to purchase the property for around $375 million, in what would be the second-highest price ever for a New Jersey office property.

Built in 2001, the 866,706-square-foot asset is 96 percent leased and also known as Newport Office Centre IV. Roughly 80 percent of the building is leased to J.P. Morgan Chase and Insurance Services Office (ISO). Per Real Estate Alert, ISO’s lease runs through 2033.

Located steps from the Newport/Pavonia PATH station, 545 Washington Boulevard is a 400-acre campus-like waterfront property. Its amenities include a full-service health club with swimming pool, a day care center and a restaurant, according to LoopNet. The property also features a helipad.

LeFrak put roots down in the Jersey City in 1986, redeveloping the neighborhood into a 600-acre, master-planned, mixed-use community on the Hudson River waterfront that comprised retail, residential and office properties as well as entertainment facilities. The developer sold another of its Jersey City properties — the 350,000-square-foot Newport Office Centre 6 building at 570 Washington Boulevard — in March last year to iStar for $170 million in a sale also negotiated by the C&W team, as reported by The Real Deal.

LeFrak currently has another project underway at 700 Washington Boulevard — a two-tower, mixed-use complex named “The Beach.”

Officials at HGI, C&W and Morgan Stanley declined to comment. Officials at LeFrak did not respond to a request for comment.