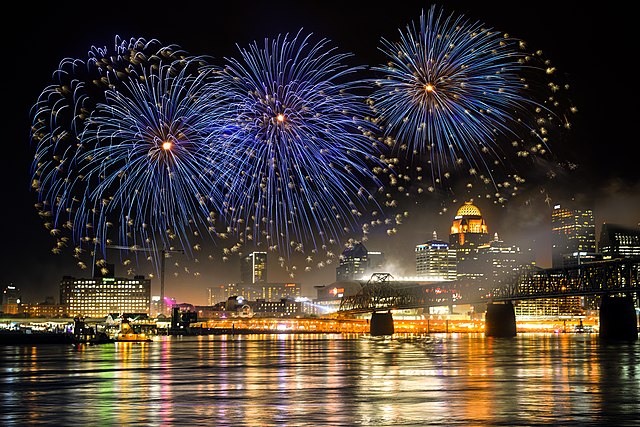 The Kentucky Derby Festival Louisville fireworks display, seen from the Indiana side of the Ohio River. Credit: Wikipedia

A Dune Real Estate Partners fund has picked up a $258 million mortgage from Goldman Sachs to fund its acquisition of 17 hotels in nine states, according to Moody’s Investors Service, which has analyzed the deal.

The debt, a two-year deal that has three one-year extension options, is fueling Dune’s purchase of a portfolio that includes 2,086 hotel rooms from Florida to California. Dune will pay interest of 2.43 percent above the one-month Libor, with no principal due until the loan matures.

Dune’s new lodgings include properties managed under branding from Marriott International, Hilton Worldwide and IHG (the company that runs Staybridge Suites and Holiday Inn.) The Manhattan-based buyer is also contributing $110.6 million in equity to its $336.7 million acquisition, a valuation that implies a 76.6 percent loan-to-value ratio.

All told, it’s a fair bit of leverage for a single-asset CMBS deal, as Moody’s analysis acknowledges. But the rating agency also noted that more than half of the portfolio’s assets are in major markets such as Miami, Nashville, Boston and Denver. What’s more, almost the entire portfolio earned more revenue per available room than regional benchmark figures, Moody’s said.

The biggest property is the Louisville Marriott East, a 252-room about 10 miles outside the Louisville, Ky., city center. Other big lodgings in the deal include the Holiday Inn Express in Nashville and a Hilton Garden Inn in Miramar, Fla.