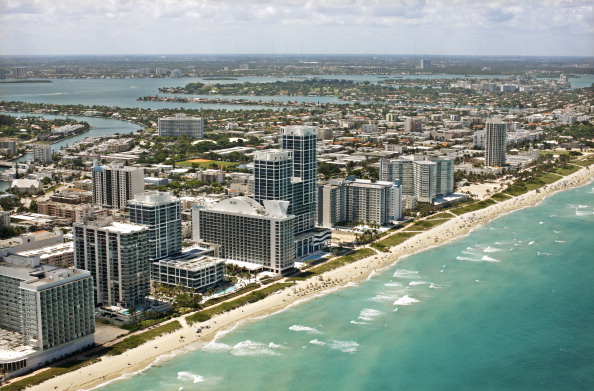 At the Commercial Real Estate Finance Council’s annual Miami conference, which kicked off at the Loews Miami Beach Hotel this morning, the improbable longevity of the most persistent business cycle in a century never dropped far from the top of the agenda. As bankers and borrowers traded business cards over coffee, ballroom panel sessions served as a sort of cheerleading soundtrack toasting one more year of strong credit.

“The world is full of black swans — and sometimes an orange one,” one industry official said at the morning’s convocation. “There’s plenty to worry about. But we get beyond it.”

Still, conversations up and down the hotel’s 16 stories, and all around its poolside cabanas, were stuck on one central question: Is the current 10-year growth cycle invincible — or overdue for a fall?

Harbingers of disaster have come and gone, without disaster in their wake. What gives?

“The yield curve is no longer inverted. Remember how scared we were about the inverted yield curve?” the official said. (CREFC bans journalists from identifying who said what at its nigh-sacred secular conclaves.) “We got over that.”

Meanwhile, in a coffee shop next door to the Loews, David Eichenblatt seemed to accidentally-on-purpose allow a reporter to peek at his personal schedule for the day: fully booked. Eichenblatt, a Miami-based veteran of equity investing, struck out on his own 13 years ago to pursue a novel business: loan insurance. As leverage levels creep up, Eichenblatt’s company, Loan Guarantee Insurance Services, sells policies that cover up to 40 percent of the debt in a construction or transitional deal’s capital stack. He earns a deductible to cover the first-loss debt position.

It’s a business almost custom-designed for a credit market where a slew of eager lenders are hungry for ways to make every deal work.

No one’s filed a claim yet on one of his policies. In fact, he looks forward to paying out LGIS’ first claim. “Just to show that we’ll pay out,” he said.

Anything keeping him up at night? “Not particularly,” he said. And yet, “unemployment remains low, but global GDP [growth rates] are historically anemic. Economies are having trouble achieving escape velocity,” Ward noted.

Real estate credit might be holding steady, but corporate credit, sovereign credit and consumer credit look far more delicate to him. And a tumble in one of those sectors could easily spill over, he warned.