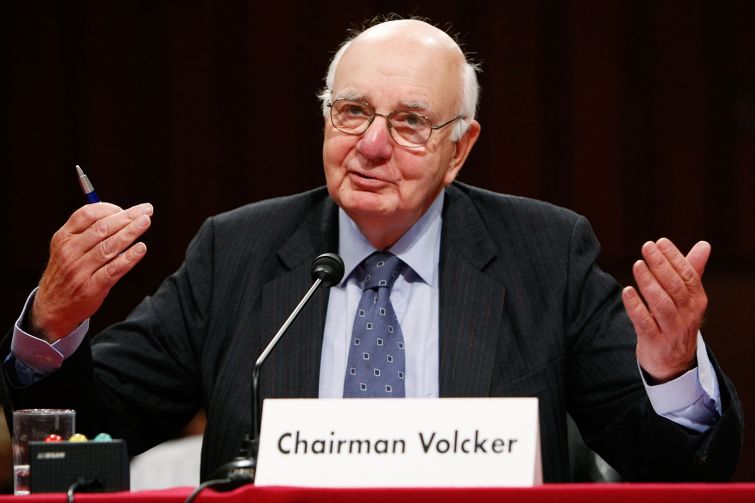 Paul Volcker, the former Federal Reserve chairman who died on Sunday, won few friends in the real estate industry early in his tenure at the central bank. Taking office in 1979 and faced with the worst stretch of high inflation in modern American history, he fought back by nearly doubling the federal funds rate in his first two years, sending the prime rate higher than 20 percent.

Borrowing became so expensive that construction slowed dramatically, as the sector bled nearly 400,000 jobs at the height of the ensuing recession. But the economy’s rapid recovery — not to mention the decades of relatively stable growth that commenced with his regime — proved sufficient to endear his legacy to real estate industry economists.

“He was the greatest Fed chairperson that I’ve ever seen,” said Spencer Levy, CBRE’s head of research in the Americas. “He took short-term pain for the long-term success we’re seeing today. No individual is more responsible for the success of the economy in the last 40 years.”

That reputation rests largely on the fact that Volcker’s aggressive response to the pair of recessions that hit the U.S. economy in the early 1980s rapidly broke the back of stagflation, the pernicious blend of rising prices and plateauing growth that coincided with high oil prices and high unemployment. Volcker saw that unwinding the predicament meant, first and foremost, ridding the market of the sense that persistently high inflation might be the new normal. He did so by flexing the full extent of the Fed’s monetary power, raising the bank’s benchmark rate to a level that looks positively cartoonish from today’s perspective.

The policy worked — not least because it ensured that the economy would not soon doubt the Fed’s willingness to pull any and all monetary levers necessary to keep employment and inflation on track.

“Probably more than what he did to break inflation, [Volcker’s] more important legacy is the value of the Fed’s credibility,” said Heidi Lerner, the chief economist at Savills. “There was a lot of change occurring at the time. Volcker spearheaded what were unconventional policy measures to meet it.”

That approach served as an example to Ben Bernanke, the Fed’s chairman during the 2008 financial crisis, who has praised Volcker’s legacy in the days after Volcker’s death. Bernanke, too, turned to unconventional monetary policy tools to combat his own era’s economic crisis, leaning on quantitative easing to stimulate demand after his central bank had reduced its benchmark interest rate near zero percent at the end of 2008.

But, 10 years later, Volcker’s fierce independence may be the most relevant lesson of his tenure. Volcker faced venomous opposition at the depths of the early 1980s recessions, including protests in which construction workers blocked the streets around the Fed’s Washington, D.C., building with bulldozers and shipped two-by-fours to Volcker’s office.

The Fed’s current chairman, Jerome Powell, would do well to follow the example of Volcker’s steadiness in the face of political pressure, according to Richard Barkham, CBRE’s chief economist. Powell has been up against a steady drip of public demands from President Donald Trump to ease interest rates during Trump’s first term, which the president has predicted would help sustain economic growth. In a tweet, the President of the United States even wondered aloud whether Powell or China’s leader, Xi Jinping, is America’s “bigger enemy.”

“Central banks should be free to set monetary policy as they see fit,” Barkham said. When pursuing a steady level of low inflation and low unemployment, “it should do those things independently without influence by politicians,” Barkham added, citing Volcker’s determination to do so as a worthy example for Powell.

Volcker, who was born in New Jersey in 1927, attended Princeton University, Harvard University and the London School of Economics before joining the Fed as an economist in 1952. He served presidents of both parties throughout his life, having worked in the Nixon administration’s Treasury Department before his nomination as Fed chairman by President Jimmy Carter in 1979.

Nearly thirty years later, Volcker endorsed Barack Obama for president and advised him during the first years of his administration. In that capacity, he advised responding to the financial crisis by banning deposit-taking banks from risky activities such as proprietary trading and owning hedge funds. That rule — dubbed “The Volcker Rule” by President Obama — became part of the landmark Dodd-Frank Act.