California is leading the charge in the new must-have amenity, and shopping centers around the country (as well as other real estate owners) are hoping to get a contact buzz 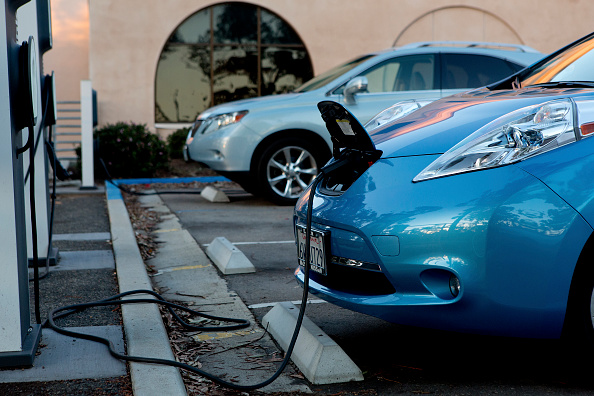 Charging stations for electric vehicles (EVs), which used to be a new-age amenity option, have quickly become almost a required line item in budgets for new real estate in California.

But, as the electrification drive continues to become more popular, developers and landlords see a different kind of green. More EVs means more building investment opportunities for new charging stations, and a chance to provide a feature landlords have never had before. More and more charging stations are being included in plans for every property type, from shopping centers — where a consumer can plug in her $81,000 Tesla Model X while she shops for the holidays — to new creative office campuses and major mixed-use residential projects. They all attract the same sort of eco-minded tenants like the shopper driving the Model X.

Large grocery chains like Trader Joe’s or Whole Foods and premier retail hubs like Westfield Culver City, the Beverly Center and The Grove have long been drawing new consumers since they installed charging stations. And since it takes more time to recharge an EV than a gas tank, they’re staying longer and will shop more.

Just over the past few weeks, even, Los Angeles in particular saw some significant signs that the evolution is only just getting started. After Ford introduced the electric Mustang Mach-E, Tesla separately unveiled its Cybertruck — both at events in L.A. Then, Mayor Eric Garcetti released updated plans to significantly increase EV use across the city.

The plan calls for 30 percent of all “light-duty passenger” vehicles and 40 percent of all “short-haul trucks” in L.A. to be electric-powered. That goal is contingent on the benchmark set at 84,000 public and workplace EV chargers, and 95,000 for medium and heavy-duty trucks, which is notably ambitious seeing as there are currently only about 21,000 charging stations total statewide.

“Many of our investor clients, and every landlord, is looking to increase capacity for charging stations,” said Mike Ruppert, CBRE’s managing director of property management in Greater L.A. “It’s still marketed as an amenity, but it really isn’t anymore. It’s a baseline part of every deal.”

The California Air Resources Board, the California Public Utilities Commission and the California Energy Commission have together budgeted about $2.4 billion for EV advancement over the next five years, with a large share set to build charging stations, according to reporting by the San Diego Union-Tribune.

State policymakers are plugged in, too. Starting in January, California will require all new multifamily properties of 17 units or more to include charging stations for 10 percent of parking spaces — up from the 3 percent set in 2018. About three years ago, the state mandated that 6 percent of spaces in new non-residential buildings be EV-capable.

Rupert said retail, creative office and medical office properties will continue to benefit the most from offering charging stations, which attract both modern consumers and top-tier tenants. CBRE’s clients started seriously adding stations about five years ago, but now they’re almost a given at new projects.

“EV charging at our office and retail properties have become a must-have,” he said. “If it’s a creative office project, you have to put in EV charging to attract today’s tenants … It’s more of a requirement if you’re trying to lease up a modern office space.”

CBRE and SemaConnect last month announced a partnership with Volkswagen, in which they installed 1,100 new charging stations across the country, including 70 in L.A. And many of the projects that CBRE has worked on this year in L.A. further demonstrate the increasing demand. One project in Century City is upping its charging station spaces from 36 to at least 156. In Pasadena, CBRE secured a lease at the Cotton Medical Center, where new renovations included installation of more EV charging stations.

Mark Oberholzer, associate principal at KTGY Architecture + Planning, works on mixed-use and multifamily projects in L.A. He explained one of the largest barriers to EVs gaining mass appeal stems from the infrastructure gap, in which consumers aren’t sure they would be able to find a charging station when they need to. But Oberholzer said a lot of multifamily builders in Los Angeles started including charging stations well before the state’s requirement.

“It wasn’t a good move to build a new condo or apartment project without some accommodations for EV vehicles,” he said. “As an owner, you don’t want to end up with a property that can’t accommodate that trend.”

Now, Oberholzer said developers are trying to figure out how to include even more EV spaces, as it’s notably more difficult to include more than a handful of charging stations for multifamily projects.

“It’s great to say, ‘Let’s make all the parking spaces EV-ready.’ But there is significant strain to the electric load for each building,” he said. “If you add a bunch of EV stalls, you have to upsize your transformer, and that can add huge costs.”

On each property, whether it’s mixed-use residential or a retail center, the electrical capacity of the location varies and becomes a major factor as to where different types of stations can be added. Two charging sites in the same parking lot can range in cost by more than $100,000 if one location requires trenching or boring, and the other does not, according to the Governor’s Office of Business and Economic Development.

There’s also the added curveball of navigating different types of charging stations. For example, Tesla stations take less than an hour to charge a car, but they’re only designed for Tesla vehicles. Other brands might use “direct current fast chargers,” or “level 1” charging stations, which take eight to 15 hours, or “level 2” stations, which take three to eight hours.

“There didn’t used to be as many options,” Oberholzer said. “If you’re going after a certain market, you kind of need to be open to having more than one type available. But it’s hard to predict the breakdown of chargers, and how they’ll be used. I would guess there will be some industry coordination for that … There has to be.”

The demand has even created challenges for landlords in managing stations after they are installed. Ruppert explained that in the past two years demand has increased to a point where landlords have to create incentive programs to persuade EV drivers to move their car after it charges so others can plug in.

“We need to get more turns at the pump,” he quipped.

But help is on the way. In October, an L.A.-based startup, EV Connect, announced that it raised $12 million for EV charging software that aims to allow customers to mix charging hardware.