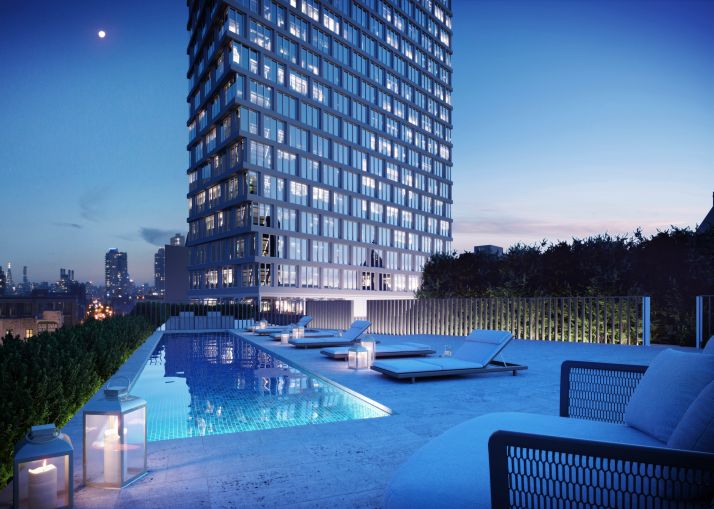 A rendering of the outdoor pool area at 550 Clinton Avenue. Courtesy: Hope Street

The construction financing, which closed on Nov. 27, was arranged and secured by AKS Capital Partners co-founders Aaron Appel, Keith Kurland and Jonathan and Adam Schwartz, along with managing director Michael Diaz. Sources who spoke to CO confirmed that Pacific Western was brought in by Square Mile as a senior lender in the deal, although they declined to provide more details on the transaction.

The 280,000-square-foot property is slated to comprise 284 residences and 60,000 square feet of commercial space. As part of the development of the residential tower, Hope Street will also be making repairs to an adjacent landmarked church — the 19th-century Church of St. Luke & St. Matthew at 520 Clinton Avenue. In March 2018, the developer finally got approval from the Landmarks Preservation Commission (LPC) to erect its project next to the old church, combining the two into one zoning lot and securing roughly 60,000 square feet of air rights held by the church; Hope Street had put forth its proposal for the church that January.

The LPC reportedly returned the original proposal to the developing party for revisions, which included an altered tower design and a restoration to the church’s facade; the initial proposal focused on a patch repair rather than a full repair of the building’s exterior, as per a 2018 report in the Brooklyn Daily Eagle.

The Morris Adjmi Architects-designed residential tower — at the corner of Clinton Avenue and Atlantic Avenue, a bustling stretch of road in Brooklyn — will have retail on the ground floor, coworking space managed by Hope Street, and a landscaped rooftop. It will also feature a gym, a game room, and a lounge as well as an outdoor pool that will be located on the rooftop of the base of the development, which is about three stories tall and gives way to the residential high-rise that will tower over the pool area.

Gershon and Hope Street declined to comment on the deal. An official at Square Mile was not able to respond before publication.

This story was updated to include Pacific Western Bank as a senior lender who was involved in the debt package.