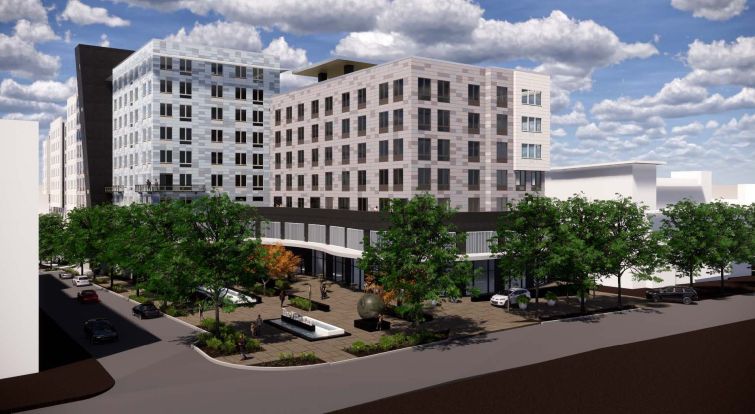 A rendering of The McClaren in Greenville, S.C. Courtesy: Meridian Capital Group

Westchester, N.Y.-based developer Lighthouse Living has nailed down $37 million in construction financing from Regions Bank to build The McClaren, a planned mixed-use and multifamily property in Greenville, S.C., Commercial Observer has learned.

The three-year, full-term interest-only loan covers the start of development on the asset, which is located in a designated opportunity zone in Downtown Greenville, according to information from Meridian Capital Group, whose team comprising Senior Managing Director Rael Gervis, Vice President Eli Finkel and Managing Director Jonathan Stern — based out of the brokerage shop’s New York City headquarters — arranged the financing on behalf of the borrower.

“The solid Greenville market fundamentals, strong sponsorship of Lighthouse Living and quality of the McClaren project, in combination, made this attractive to lenders and allowed [us] to structure and close this financing seamlessly,” Gervis said in prepared remarks. “The fact that this project is in an opportunity zone and was started before the December 31, 2019, deadline to maximize the tax benefits is another value-add for investors in the deal.”

The nine-story project, which covers just over half of a city block, has an official address at 1 Wardlaw Street, according to project information from Lighthouse’s website. It also has alternate addresses at 322 Rhett Street and 106-110 Wardlaw Street, according to Meridian. The development was named after Dr. E.E. McClaren, a black physician who in 1949 founded a clinic at 110 Wardlaw Street, next to his home, to service the area’s black community that was routinely denied care at Greenville General Hospital.

The historic, roughly 3,000-square-foot clinic still exists and will be incorporated into the new development, Scott Johnston, the founder and principal architect of Greenville-based Johnston Design Group told the Greenville News in March. Once Lighthouse learned of the significance of the clinic, it moved to incorporate it into the development, rather than demolish it, he said.

The clinic will be lifted from its foundation and moved several dozen feet to a new foundation bordering The McClaren on the corner of Academy and Wardlaw Streets. Johnston told the Greenville News that he wasn’t certain of the purpose the clinic will serve, but that it will more than likely be a cultural showpiece.

The McClaren will comprise 244 rentals, with private balconies and in-unit washer and dryers. There will be 37 studio units, 86 one-bedrooms, 111 two-bedroom apartments and 10 three-bedrooms. Twenty percent of the rentals will be reserved as workforce and affordable housing, according to Lighthouse’s website.

The development will have just over 14,000 square feet of retail space, 430 valet parking spots and around 22,766 square feet of amenities, including numerous TV lounges, a saltwater pool, barbecue stations, a fire pit, a “chef’s demonstration kitchen” that will have outdoor terrace space, a 1,600-square-foot fitness center, a meditation room, a sauna and a movie theater. It will also have a rooftop observation deck, a bicycle garage and storage area and a dog park, as per information from Lighthouse’s website.

An official at Lighthouse was not immediately available. A representative for Regions Bank was not able to comment before publication.