CalSTRS picked up a 90 percent interest in the asset from developer Skanska, which finished the construction of the building earlier this year 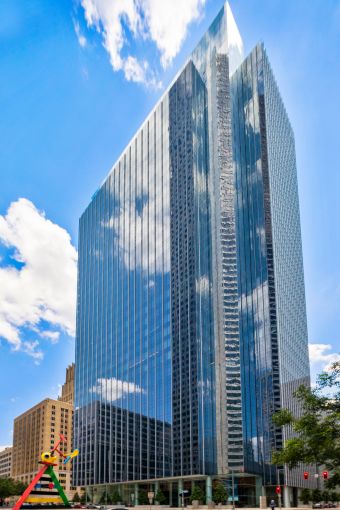 Sources told CO that the financing, which was arranged by Eastdil Secured, was provided to a joint venture between Beacon, Skanska and an unnamed institutional investor.

But in November, Real Estate Alert reported that CalSTRS was in line to acquire a 90 percent majority interest — announced by Skanska this month as a $373 million purchase by an affiliate of Beacon — in the office high-rise, which was officially erected by Skanska in the second quarter of this year. That affiliate is CalSTRS, which has partnered with Beacon as recently as 2018 to invest hundreds of millions of dollars into real estate opportunities across the country.

“This newly-developed trophy asset has set a new standard for incorporating high-end amenities into an office property that allow corporate tenants to offer employees areas for collaboration and leisure, without having to sacrifice their traditional workspace,” PGIM Real Estate Finance managing director Tom Goodsite, who led the origination of the mortgage, said in a prepared statement. “We were glad to have had the opportunity to work with the buyers on this transaction and accommodate an accelerated closing timeline of just 11 days.”

The 35-story, roughly 780,000-square-foot tower — at 800 Capitol Street and with an alternate address of 811 Rusk Street, inside the heart of the city’s central business district — topped out in April 2018 and was completed earlier this year.

The property is 90 percent leased and anchored by Bank of America and Houston-based Waste Management, and it also hosts international law firm Winston & Strawn and Houston-based private equity firm Quantum Energy Partners. The building’s developer, Skanska, also has offices within the asset.

In July, Bank of America moved from the nearby 700 Louisiana Street, consolidating a crew of about 600 employees from three locations into over 200,000 square feet across six floors in the new high-rise, according to reports in the Houston Business Journal.

The building — designed by global architectural firm Gensler — has an open-air “community hub” that features a full-service restaurant and a 9,000-square-foot “chef-driven” culinary market, which includes a cocktail bar. The property also has a 20,000-square-foot SkyPark green roof, a 7,000-square-foot fitness center and a conference and private event space called The Assembly, which sports three individual meeting spaces. There’s also subterranean retail space, with 40-foot-tall ceilings that reach the ground-level lobby.

Previously called Capitol Tower, Bank of America and Skanska announced the change of the building’s name in May after the bank agreed to lease its space. Just a few weeks after the announcement, Real Estate Alert reported that Skanska was looking to divest its majority interest in the development to CalSTRS.