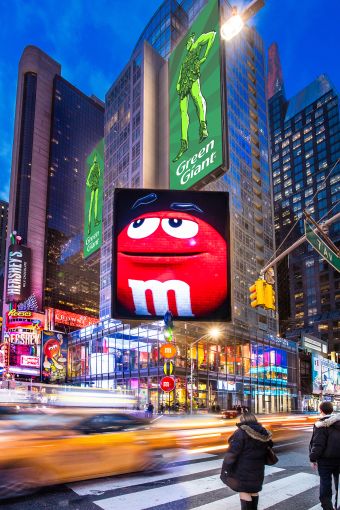 The M&M store at 1600 Broadway. Courtesy of Sherwood Outdoor.

If you thought Thanksgiving couldn’t make your belt any tighter, watch out, because two tempting Times Square mainstays have renewed their leases.

The M&M deal also included the renewal of two of Times Square’s biggest electric signs, one of which is the size of a tennis court.

“These renewals reflect the enormous branding power our locations confer,” Brian Turner, president of Sherwood Outdoor, an affiliate of Sherwood Equities which owns the signage for the two properties, said in a release announcing the deals, “not only the retail space, but also the unsurpassed signage visibility.”

M&M’s World is known for its “wall of chocolate”, a two-story tall wall of different varieties of M&Ms, as well as its customizable M&M printer for making personal candies.

Italian restaurant chain Olive Garden has had its three-story Times Square eatery since 1994 and has become famous for its $400-a-pop New Year’s Eve parties. According to the release, both retailers are planning upgrades.

News of the M&M deal was first reported by the Wall Street Journal.

M&M’s long-term renewal — which has a 2.5 percent annual rent increase — at 1600 Broadway comes as Sherwood put the 27,000-square-foot retail condo up for sale for $200 million, according to the WSJ and The Real Deal. CBRE‘s Darcy Stacom, Bill Shanahan, David Fowler and Doug Middleton are handling the listing.

A spokesman for Sherwood did not provide asking rents in the deals, but the WSJ reported that average retail rents in Times Square were at $1,820 a square foot in the third quarter of this year, a 24 percent drop from the same time five years ago.