Let There Be Lite: There’s a Whole Lotta Stretching Going On in Today’s Market 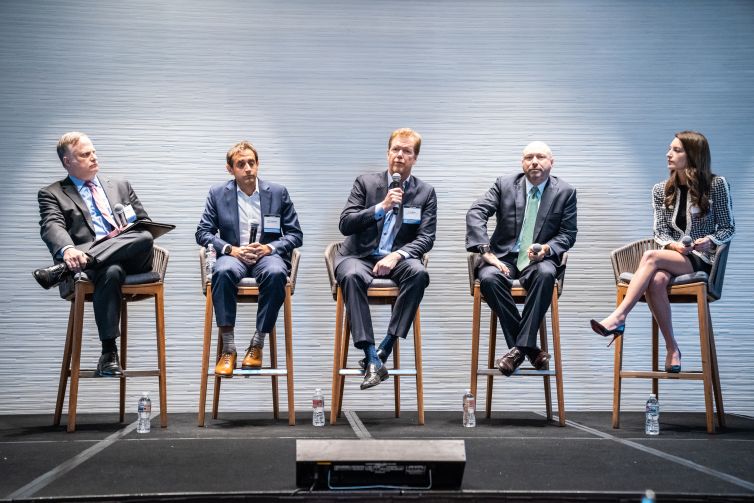 Indicative of the heightened bargaining power they have in today’s competitive lending market, borrowers are unabashedly pushing back on the protective covenants that keep lenders sleeping easy at night, panelists at Commercial Observer’s Second Annual Fall Financing conference in L.A. said.

And, they’re doing it successfully.

“There’s been a push towards the covenant-lite idea of less structure,” Danielle Duenas, a vice president at Mesa West Capital, said. “We’ve lost deals to [this borrower request], or we’ve chosen to walk away from deals because of it. A lot of sponsors today just want the money with less controls around it.”

While some sponsors are requesting longer loan terms to get through their business plans, others are balking at tests and parameters around future funding and future equity contributions, Duenas said.

“We typically have minimum leasing guidelines and leasing holdbacks for future funding. Some sponsors aren’t wanting those [included] at all,” he continued.

“Cov-lite is happening because of the sheer number of players in the system,” Troy Miller, head of Starwood Property Trust’s West Region, said. “When everyone is gravitating around a similar spread or coupon level, guys are winning deals [by offering] cov-lite.”

Seeing as Starwood is one of the biggest borrowers on the street on the equity side, Miller has an insider view into exactly what lenders are granting borrowers today: “I see what our guys can get on the buy side and it’s crazy; almost no covenants,” he said. “Of course, everyone knows what others are getting and we all push for that.”

Seth Grossman, a senior managing director at Meridian Capital Group, said he sees a bifurcation in the market between the groups who are holding steady on structure and leverage, and those who are not.

“There’s such a demand for yield that you can get what you need but you’re going to pay for it,” he said. “If you want the cheapest pricing then the lender will still dictate, ‘We need X, Y and Z to make a deal work.’”

The pushing, pulling and stretching within the current lending environment quickly became the topic du jour during the first panel, with panelists describing some of the deals that got away.

“We’ve seen a couple of loan sale packages and we love looking at those packages because we see a loan we lost and why we lost it,” Greg Michaud, head of real estate finance at Voya Investment Management, said. “It’s typically loan to cost. There’s a $800 million package out right now, we lost out on 25 percent of it and it was all over loan to cost.”

Duenas said that while Mesa West does not typically lend on ground-up construction, the lender came close to a deal that had an adjoining parcel of land as part of the collateral.

“We proposed structure around the vacant parcel and entitlement situation,” she said, “but another lender came in and didn’t care; the basis would have been close to 90 percent loan to cost. If you don’t have parameters around your risk, you’re not mitigating your risk.”

Ultimately though, “there’s a lender for every deal,” Grossman said. “If you want to borrow 95 percent we can typically find a lender that’s going to do that deal, but they’re typically going to charge you a ton of money and have a ton of recourse and put a ton of structure in there. If you’re borrowing 50 percent on a great project in a good market you’re going to get phenomenal terms.”

The panelists agreed that while underwriting has remained pretty prudent for the most part, leverage has ticked up over the past year. That said, most lenders are staying in their lane.

“Leverage is inching up for sure,” Miller said. “If you have lenders offering 60 to 65 percent stretch seniors, I need to offer 70 percent leverage [to be competitive]. Most clients are very cautious on leverage, they’ll maybe go to 75 percent. Where we’re seeing the real stretch is smaller borrowers trying to do bigger projects and fill up the capital stack any way they can.”

Mesa West is keeping it conservative and lending at around 65 percent loan to cost. The debt fund has been busy with construction-to-perm financings and has a hankering for the industrial space, but it remains “super competitive,” Duenas said.

Speaking of asset types, Michaud said retail isn’t always a dirty word, with Voya shying away from malls and big box retail but targeting grocery-anchored assets as part of its lending repertoire. Voya has also financed “a ton of apartments,” but via bridge loans and on a floating-rate basis, finding it hard to compete with Freddie Mac and Fannie Mae on the fixed-rate side.

“We don’t have cheaper money than the government, so we go where we get good relative value,” Michaud said.

Starwood, on the other hand, has been busy with transitional office financings, Miller said and — given the DNA of his company — he’s financed several hotel deals. Ground-up construction comprises roughly a quarter of his lending book today.

Grossman said he’s seeing a lot of ground-up construction, value-add, adaptive reuse deals cross his desk. When moderator Marc Young, an attorney at Allen Matkins, asked what that trend says about where we are in the cycle, Grossman said, “It says that fixed-rate stabilized assets are expensive and if you want to make your yield you need to create value. Everyone is trying to play in their comfort zone but you’re always looking for a little more yield when prices compress. So you stretch a little bit further on the value-add spectrum or go to a secondary market relative to where you’ve been.”

Indeed, “the quest for yield is pushing people to different spots on the risk spectrum, which is natural and normal and speaks to where we are in the cycle,” Miller concurred, adding that several of the private equity funds Starwood works with are now moving to secondary markets in search of better returns.

Before the panel ended, the conversation swung to another sticky subject: co-everything, with panelists overall steering pretty clear of coworking and co-living tenants within their portfolios.

“If it’s in a deal it has to represent 15 percent or less of the income,” Duenas said. “We haven’t gotten fully comfortable with co-living. We’re definitely cautious in that sector. And a lot of multifamily deals include Airbnb or short-term rentals — which again, we don’t love.”