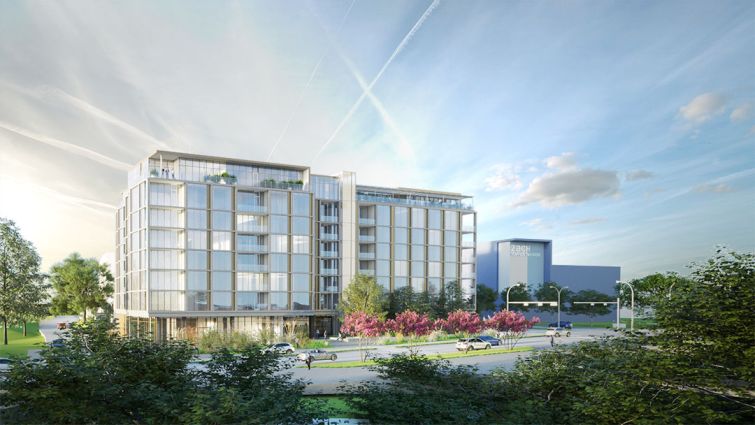 A rendering of The Loren at Lady Bird Lake. Courtesy: HSF

The first lien construction loan will help finance the development of the 108-key boutique as well as an adjacent condominium tower with 26 two- and four-bedroom residences. It’s on track to open in the first three months of 2022, according to Dallas-based HSF.

This project will be the first Loren-branded luxury hotel in the U.S. built by the sponsors, operating under the entity The Loren Hotel Group, which was formed by the co-founder of C12 and former Barclays managing director, Stephen King; the company announced its palns for the project on Dec. 3. This development follows the venture’s 2017 opening of its Caribbean flagship The Loren at Pink Beach in Bermuda, which was lauded last year by Travel+Leisure and Condé Nast Traveler.

“Austin is booming, both in terms of population growth and business and leisure travel, and this new development will be able to successfully serve both sectors with its combination of a boutique hotel and luxury residences,” Mike Jaynes, president of HSF, said in a prepared statement. “We are looking forward to supporting the expansion of the prestigious Loren brand to open their first property in the U.S. and believe it will be a great success.”

The $130 million project will be constructed on a nearly one-acre vacant lot at 211 South Lamar Boulevard that’s the former site of a Taco Cabana restaurant. It’s located across the Colorado River, just Southwest from Downtown Austin. The development will feature a spa, a gym, a swimming pool and health and wellness retail offerings as well as a rooftop restaurant and event space, with a lounge and bar, according to previous information released by The Loren Hotel Group.

“We’re excited to continue the success of The Loren Hotel brand by bringing our next venture to Austin — one of America’s most exciting and fastest growing cities — where we believe the luxury traveler is underserved,” King said in prepared remarks. “As in Bermuda, where we’ve attracted a discerning international travel market, we expect to deliver the same focus on elevated service, appreciation for quality design and art, and an impeccable location to appeal to international travelers and serve as a social hub for Austinites.”