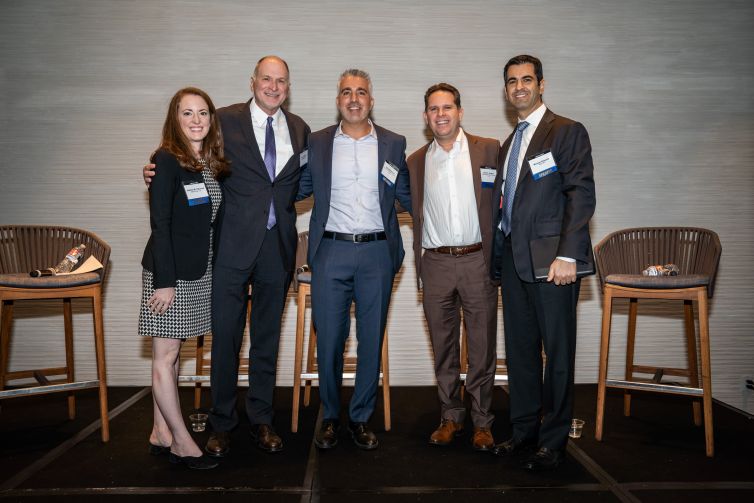 All the unseen pieces of the puzzle — even if they’re unknown — have to come together for a development to secure construction funding, break ground and complete a new project. At Commercial Observer’s Financing Forum in Los Angeles, industry experts talked about the challenges and the growing obstacles that lenders face today, and how their firms plan to advance.

The barriers for construction continue to rise even after entitlements are secured, cutting more pieces out of the pie. Anticipated costs are soaring throughout the country, and there’s almost always overrun as about 90 percent of projects were coming in over projected timelines at the end of last year. According to a recent report by JLL, labor costs and overall costs are expected to continue to climb next year, too.

Siobhan O’Donnell, a partner at Ballard Spahr, moderated the panel on the current state of construction lending.

Thomas Whitesell, group head of real estate for Pacific Western Bank, has been working to expand the lender’s work with established developers and investors seeking real estate bridge and construction loans. He said Pacific Western sees a lot of deal flow, particularly on the East Coast, with New York and Washington, D.C., as their two largest markets. But he also pointed to Southern Florida as the third.

“There’s a lot of supply, but it’s filling up down there. […],” he said. “But across all markets, if you look at the ramp-up in the price points on all these apartment rents, it seems to be getting almost out of hand. How many people can afford a $5,000 [per month] one-bedroom apartment? It just seems absurd, but they seem to keep building them.”

Ash Baraghoush, senior director of multifamily investments at Hanover Real Estate Investors, said he is seeing more non-recourse action on the loan side, adding that it can be very difficult to make deals work with rising construction costs and land prices that haven’t adjusted.

“All of that is made more difficult from an underwriting perspective on the equity side to make deals work,” he said.

Michael Fleischer, a managing director at 3650 REIT, directs the bridge-driven lending platform in major through tertiary markets but said the firm is cherry-picking the best opportunities.

“Because of the nature of our business, if we do $750 million this year, that may be 10 deals,” he said. “We see a lot of deals, but pass on most of them because we don’t have urgency to put out massive sums of money.”

Fleischer said 3650 REIT has been able to find interesting multifamily opportunities in markets like Seattle, where it recently helped a sponsor in a distressed situation find a preferred equity investment. Fleischer also spoke excitedly about a Minnesota deal attached to the largest employer in town.

“I feel pretty good about that,” he said. “It’s attached to a 6,000-employee, brand-new, under-construction $850 million [asset]. So, there are opportunities in markets across the country. You just have to be careful and cautious. We are definitely hesitant on things like condos in New York or rentals in Los Angeles, and other places like that. But on a selective basis, we have been able to get a lot done.”

Fleischer echoed Baraghoush’s concerns and said he has never seen so many deals where he is 100 percent certain that the sponsors are losing money.

“In many instances, they’re already out of the ground, they were looking to EB-5 [financing] or money from overseas, and all of the sudden … what do they do now?” he said. “So, they’re building through because it maximizes their recovery, but I really don’t see any way they actually make money.”

David Sudeck, a real estate attorney and partner at Jeffer Mangels Butler & Mitchell, has a niche focus on the hotel sector. He represents owners in sales, development, construction, financing, leasing and sale-leaseback deals, and he also advises developers in the use of EB-5 financing. Sudeck explained that the hotel market has been pretty difficult from a financing perspective.

“On the one hand, there are more lenders than ever, with private debt funds that are lending a lot of non-recourse debt. But at the same time, many of my clients have been working for years to get their entitlements in difficult entitlement markets,” Sudeck said. “They had EB-5 commitments dating back three to four years ago, but now EB-5 is effectively not available, other than some redeployment.”

He said he has been working on more full-service, luxury projects on both coasts more than he ever has previously.

“It’s in part because the deal doesn’t pencil out any other way,” he said. “Construction costs are way up, unions are very active adding costs, so we’re trying to figure out how to make things work. And with EB-5 effectively gone, and unless you’re in an opportunity zone, it’s a difficult market. It’s a good time to buy and reposition existing hotels, but a very tough time to finance new hotel construction and make money on it.”