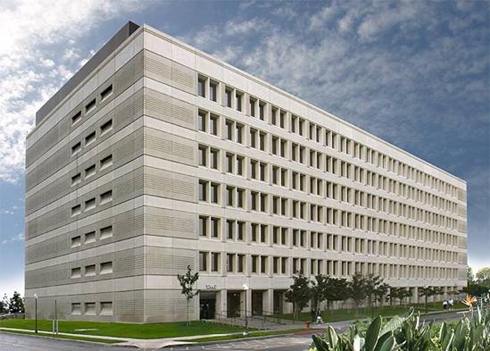 Two Los Angeles office buildings have pulled in a combined $194.9 million of debt from Wells Fargo in separate transactions, according to Kroll Bond Rating Agency and Fitch Ratings, which analyzed the loans.

In a deal that closed on the last day of October, the bank extended $66.3 million to recapitalize a public-sector-focused office building, Norwalk Government Center in Norwalk, Calif., a Los Angeles County city about 12 miles southwest of Downtown L.A. The 450,000-square-foot office building, controlled by partners Robert Sonnenblick and Nelson Del Rio, counts among its tenants government agencies including the L.A. County’s Sheriff’s Department and its Department of Public Social Services. It also hosts an office for consulting firm Accenture, which uses the space for employees who work on contract with L.A County.

Del Rio and Sonnenblick will pay 3.85 percent interest on the 10-year, interest-only loan. An appraisal valued the property at $104.4 million, implying a modest 63.5 percent loan to value ratio.

Wells Fargo’s debt replaces a previous financing on the broad, seven-story office asset from Berkadia, as well as providing funds to allow the borrowers to buy out minority equity partners. Additional money will go towards upgrading the building’s wiring and converting a parking lot into a garage, which will allow development of more office space in the future.

The deal closed the very day that Berkadia’s loan was coming due, Sonnenblick told Commercial Observer. Why the tight timing? Because Sonnenblick first had to complete a deal to re-sign some of the building’s government tenants to new leases.

“I don’t like cutting it close, but we had to extend some leases from Los Angeles County,” Sonnenblick said. “We got them done at the 11th hour.”

Sonnenblick and Del Rio’s portfolio in the L.A. area is focused on leasing to government tenants, he added, because he views them as steadier bets than private-sector lessees — especially tech companies.

“All these tech tenants kind of scare me,” Sonnenblick said. “I’m kind of an old-timer. Credit matters to me.”

Elsewhere in Los Angeles, the bank also lent $128.6 million to refinance a single-tenant office property in Beverly Hills. That asset, 360 North Crescent Drive, is controlled by Tom Gores, a billionaire private-equity investor whose firm, Platinum Equities, uses the office building as its headquarters.

The site consists of two buildings totaling 124,000 square feet, linked by a manicured campus. First built in 1939 as a home base for the Music Corporation of America, the campus won architect Paul Williams an award from the American Institute of Architects, according to a website dedicated to Williams’ work. Gores, who also owns the Detroit Pistons, bought the building for use as Platinum’s headquarters in 2003.

When Fitch analysts visited the site to inspect it, a property manager told the rating agency’s scouts that engaged couples often use the picturesque campus — which is mostly open to the public — as a backdrop for wedding photos.

Platinum will pay 3.45 percent interest on the 10-year, interest-only debt. Given that the building was valued in an appraisal at $246.5 million, the debt implies a relatively light loan-to-value figure just about 52 percent. The loan refinances a 2012 round of financing from J.P. Morgan Chase, and will allow Platinum to extract $49 million of equity from the property.

Gores did not respond to an inquiry. A Wells Fargo spokeswoman declined to comment.