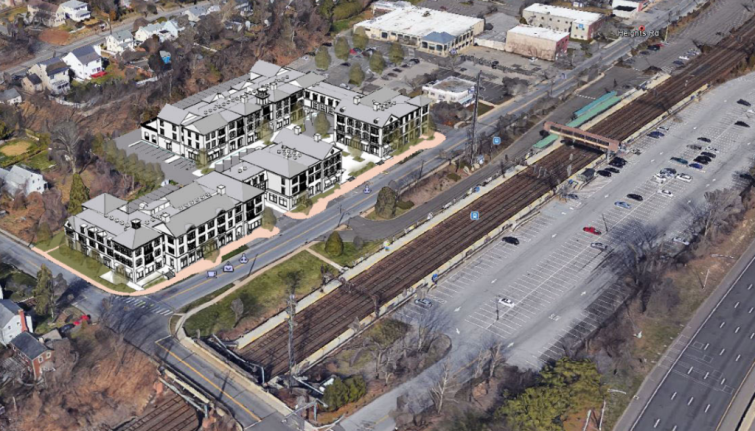 A rendering of the planned project. Image: Trez Forman

A family businessman in Darien, Conn. has picked up a $45.4 million loan from Trez Forman Capital to fund a commercial redevelopment project in the city, Commercial Observer can first report.

The leader of the development group, Greg Palmer, is the fifth-generation family owner of a large boutique grocery store, Palmer’s Market, in the well-heeled Fairfield County suburb about thirty miles northeast of New York City on the Long Island Sound. The project would demolish four 60-year-old buildings adjacent to the grocery store, at 264 Heights Road, and replace them with three new ones, which will include 60 apartments as well as shopping, restaurants and a garage.

The site is adjacent to Metro-North Railroad‘s Noroton Heights station on the line that connects Grand Central Terminal with New Haven, Conn. According to the most recent ridership study, conducted in 2008, the station accounted for about 2 percent of the line’s ridership, which at today’s levels would equate to several thousand daily passengers.

“We are thrilled to expand our tri-state portfolio with this new loan,” Brett Forman, Trez Forman’s CEO, said in a statement. “Noroton Heights is a project that fills a void for new apartments, retail and restaurants to serve the many commuters who rely on the rail station. We continue to aggressively monitor the region for similar opportunities.”

The small commercial buildings in the area that will be cleared for the project are currently occupied by small retail tenants including a liquor store, some small restaurants and a store for birdseed, binoculars and other ornithological accoutrements.

Palmer’s Market, which is next door, has been in business since 1921, and in its current location since the mid-1950s.

Darien made the top 10 on Bloomberg’s list of America’s 100 richest cities this year, joining enclaves such as Los Altos Hills, Calif. and Hillsborough, Calif. in the San Francisco Bay Area and Bronxville, N.Y. Households in the city earned an average of more than $341,000. The city’s largest taxpayer is a country club, Wee Burn, which is Connecticut’s oldest.

Greg Palmer did not immediately respond to an inquiry.