Stuffed: Has the Nation Lost Its Food Hall Appetite?

For the last few years, food halls were the go-to fix-it for empty retail space around the country. But the trend may have peaked. 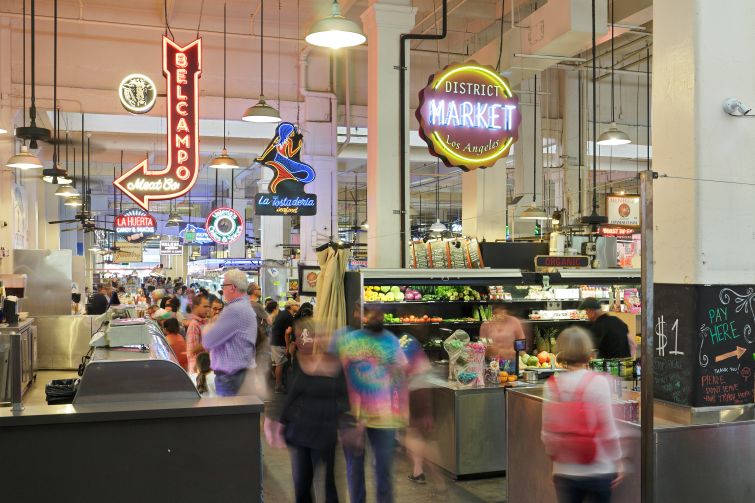 Developers may want the next Grand Central Market in Los Angeles, but the food hall trend is showing signs of waning across the country. Photo: Getty Images

Has the nation consumed so many food halls it’s finally gotten a bellyache?

Not a week goes by without a new food hall being announced around the country. The number of food halls surged from about 120 nationwide in 2016 to nearly 275 in 2018, with the amount expected to climb even higher to about 450 by the end of 2020, according to a May Cushman & Wakefield report.

In 2016, the firm dubbed New York City the “indisputable food hall capital of the world” because of how many projects were in the planning stages, and standouts like Chelsea Market and Gotham West Market were already open.

Food halls seem like an easy fix for landlords looking to fill large swaths of empty retail space as brands continue to close outposts, but experts are starting to see signs the country may be losing its food hall appetite.

“There’s a slowing and rethinking based on the volume [of food halls] and based on people in the development community finally recognizing that this is not a win-all, fix-all for an empty space,” said Herb Heiserman, a managing principal at design agency and retail consultant Streetsense, which has worked on several food halls around the country including Treats Food Hall in Florida. “It’s not a solution to every cold, dark retail space that has gone out.”

Many in the brokerage community still feel positive, overall, about food halls as uses of space, but some are starting to think fewer and fewer of them will open in the coming years.

“It was like the burger trend and the poke trend and the cookie trend and the cupcake trend,” said James Famularo, the president of Meridian Retail Leasing. “Like any trend, people get bored. It’s really exciting and you walk around, but how much can you eat? Usually, when people walk around they find one thing that they really like and just go there over and over again.”

C&W found that while more and more food halls keep opening, relatively few have closed their doors. In the past four years, the report showed that less than 10 were “notable failures,” and those were generally in “poor locations.”

However, the report warns that because of the number of food halls popping up, more closures are inevitable in the coming years. And Heiserman’s not even sure the number will ever reach C&W’s projected figures.

“There’s just not enough business to allow those operators to succeed,” said Heiserman. “I don’t know if all 450 will get to the point of opening.”

Phil Colicchio, a food hall consultant at C&W who worked on the report, doesn’t think the trend has started to seriously wane across the country, but he has seen some signs of stress locally.

Colicchio pointed to the Time Out Market in Dumbo, Brooklyn, as an example of how a poor design could hurt a food hall, even if not dealing it a death blow.

The 21,000-square-foot market at 55 Water Street opened in May but more than half the eateries were shut down by the New York City Department of Health nearly a month later because the shared walk-in fridge was keeping the vendors’ food at “temperatures that could be potentially hazardous,” Eater New York reported. It reopened about two weeks later, according to the Brooklyn Daily Eagle.

The shutdown got plenty of ink, but Jeffrey Roseman, a vice chairman at Newmark Knight Frank’s retail division, doesn’t think it’s indicative of problems at the Time Out Market or in the food hall space in general.

“I think that was just a screw up by somebody, I think that they have a great concept,” he said.

But the Time Out Market wasn’t the only food hall in the city to struggle recently. In January 2018, the Gotham Market at the Ashland development in Fort Greene axed four of its six vendors — including anchor tenant Mason Jar — nearly a year after it opened, Eater reported.

Perhaps the biggest failure in New York City was the Hill Country Food Park in Downtown Brooklyn. The 10,000-square-foot food hall at 345 Adams Street hoped to recreate the outdoor food parks in Austin, Texas, but shuttered in May nearly six months after it opened, the New York Post reported. It left a prime retail space vacant and set off a messy legal saga between the operators, landlord Muss Developers and Hill Country investor Feenix Venture Partners Opportunity Fund, over who could reclaim the space, according to the Post.

However, it’s not just New York seeing signs of stress. The Los Angeles Times reported that the proliferation of food halls in Los Angeles has caused some to struggle, while too many landlords are seeking to simply recreate the famed Grand Central Market. Brokerages like JLL have even created “how-to guides” for owners taking plenty of design cues from Grand Central Market, according to the LA Times.

“The minute you try to knock one off, you’re a hack,” Colicchio said. “It’s great to take inspiration, but it’s a really bad idea to try to replicate.”

But it’s not hard to see why landlords and restaurateurs embraced the food hall trend so willingly and want the next Grand Central Market in their property.

With brands like Forever 21, Sears and Barneys declaring bankruptcy and closing shops nationwide — the retail apocalypse, many have dubbed it — it’s becoming harder and harder for landlords to fill up empty storefronts. Most food halls range between 10,000 to 50,000 square feet, according to C&W, so eat up plenty of vacant space.

“Food halls are the tenant at the moment right now and they’re a little bit bigger and a little bit more visible,” NKF’s Roseman said. “It’s a welcome addition to the landscape of the city and it’s a great use for large space.

“Having a great, curated food hall as opposed to a bland drug store, I’d take that any day of the week,” he added.

For eateries, food halls offer a significantly lower barrier to entry compared to stand-alone restaurants or even food trucks, Colicchio said. Restaurateurs can expect to drop seven figures to get the latter up and running, but Colicchio hasn’t seen a vendor spend more than $50,000 on a food hall stand.

“The risk and the financial stress is significantly lower in the food hall environment,” said Colicchio, who added food hall vendors no longer ask him to open a standalone restaurant after finding success — they just want another location in a different food hall.

The problem is that too many landlords have pigeonholed food halls into spaces that won’t be able to support them — areas with not enough density or the demographics to support the stands — and don’t fully plan the endeavor, Streetsense’s Heiserman said.

“We’re advising many of our clients that it’s not the solution,” he said. “We are planning too many; they will not all succeed, and we are coming to the realization that if you don’t have a good operator and operations model, if you haven’t curated the right concepts — local options as well as national operations — then they don’t work.”

Plus, many owners don’t fully realize just how much a food hall — especially a well-done one — will cost. Developer American Real Estate Partners (AREP) is in the process of spending $35 million to overhaul the 22-story building above a Metro station in Rosslyn, Va. — dubbed Rosslyn City Center — and plans to add a 20,000-square-foot food hall to the project.

The company didn’t want to give specific numbers on how much it’s spending to build the food hall. But COO and managing principal Paul Schulman said “the vast majority” of the $35 million would be allocated to it.

“It’s a significant capital investment,” he said. “There’s nothing worse than investing that capital and having a poor execution. We’ll be very selective in where we look to put other food halls.”

Schulman said it’s important to partner with the right operator — in AREP’s case it was Austin, Texas-based Oz Rey — and focus on local restaurateurs to make a food hall a success. Still, AREP will face plenty of competition when it opens in 2020, with two other food halls planned within a two-block radius of Rosslyn City Center. But Schulman’s convinced the area can support each one.

While there’s no magic formula for creating a successful food hall, experts said it is important to be in a good location, find a good operator, curate the right vendor mix and create a design with enough ventilation and seating with minimal lines.

It’s hard to easily tell if a food hall will shutter, but C&W’s Colicchio said there has been one common thread in most of the major failures: using a single-operator model for vendors instead of having a “micro-economy” of multiple shops.

“The big crashes that we’ve seen come from that single-operator multiple-unit model,” he said. “It’s harder to pull off and it really is the diversity of offering and styles that I think really make [food halls] real.

“There’s no real character or personality that’s being expressed,” he added.