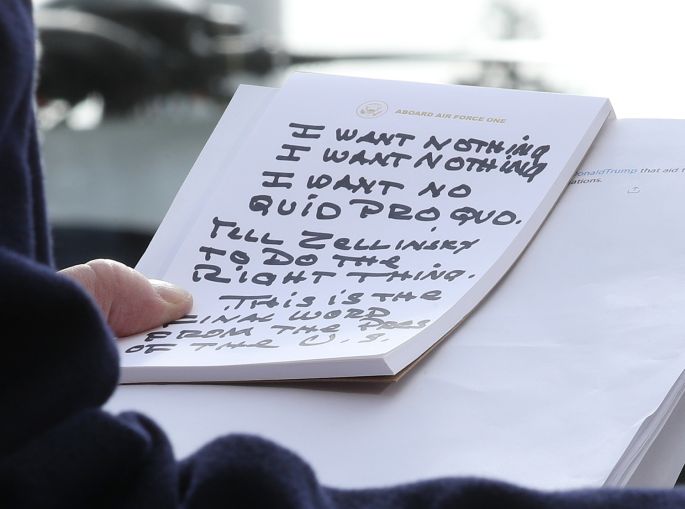 The heart and soul of the real estate business is inking big deals. But does getting to the finish line require top-flight ink-and-paper skills along the way?

For Gordon Sondland, the former hotel developer who serves as ambassador to the European Union, the answer is apparently not.

“I am not a note-taker, nor am I a memo-writer,” Sondland said in his testimony to the House Judiciary Committee on Wednesday. “Never have been.” It’s a subject that came up several times throughout his daylong appearance in the presidential impeachment proceedings, as Democrats and Republicans sparred about his reliability as a witness to the alleged bribery scandal.

A flippant approach to personal memoranda might seem at odds with the sober responsibilities of government. Indeed, a parade of famous faces in the Trump-investigation arena, including former FBI director James Comey and Ambassador to Ukraine William Taylor, have turned out to be extraordinarily dedicated memo-writers.

Yet an indifference to note-taking might be par for the course for top players in real estate, according to a thoroughly unscientific survey.

“In terms of the client-side, it tends to vary a lot,” said Ross Silver, a real estate partner at Fried Frank who’s sat through his share of negotiations. “Some clients show up to meetings holding nothing other than their coat.”

Others prefer electronic means of preservation — unless they’re up to something a bit less responsible than that.

“The younger guys show up with laptops or iPads,” Silver said. “They’re typing away, and they’re either keeping track of what’s going on in the meeting, or cleverly surfing the web — I’m never sure.”

Of course, putting pen to paper is only half the battle. Legibility is the name of the game here, people.

“I usually will take some notes but then I have a hard time interpreting what I wrote,” Jeffrey Gural, the chairman of GFP Real Estate, said in a very neatly typed email.

In Sondland’s case, poor jotting skills became a crucial evidentiary point during the highest-profile legal process you could imagine: a presidential impeachment. But landlords following along at home shouldn’t be too concerned about the legal fallout from scribbling down records.

“Clients’ note-taking would likely not be admissible as evidence in litigation, so long as it is not done electronically where it can be saved,” said Pierre Debbas, a real estate lawyer at Romer Debbas. “Who is to say you still have the notes and did not discard them? And what purpose would the notes serve?”

For attorneys themselves, on the other hand, good records are key to good lawyering.

“I for certain take extensive notes as to accurately outline the proposed business terms and highlight my strategy,” he said.

Perhaps developers should take a page out of Donald Trump’s book?

The President and erstwhile Trump Organization tycoon appeared briefly before the press outside the White House on Wednesday to protest his innocence — with the help of a page of notes scrawled with black marker in all-caps handwriting. People described the lettering as “gigantic” and “angry.”

“I WANT NO QUID PRO QUO,” Trump had written, quoting himself in a phone call he’d made to Sondland months earlier. “THIS IS THE FINAL WORD FROM THE PRES. OF THE U.S.”