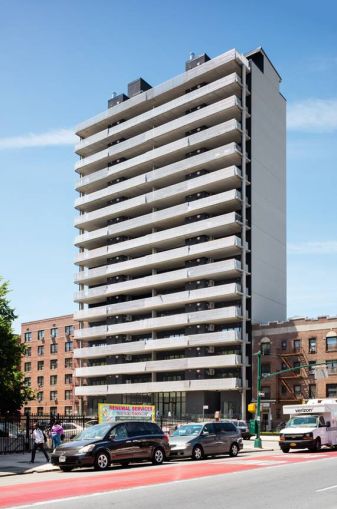 Hello Living, the Brooklyn multifamily landlord led by Eli Karp, has picked up a $34.5 million bridge loan from Greystone to refinance a building it recently constructed in the Prospect Lefferts Gardens section of Brooklyn, Greystone announced today.

The deal dispenses with a prior $28 million round of debt funding on the building, 271 Lenox Road, from Madison Realty Capital that landed in March of this year, New York City property records show. Hello Living has made good progress leasing the building’s residential component, but the two-year Greystone debt is meant to tide the building over to a permanent loan once its commercial space is spoken for.

“[Karp] had a loan with Madison, and it was coming due,” said Hope Curtis, a Greystone originator who worked on the deal. “He wanted to do a bridge loan, because the building’s been leased on the residential side, but this was to allow the commercial space to be leased out.”

In addition to 55 apartments, the 16-story project includes 9,000 square feet of office space that no tenant has yet committed to. Anthony Cristi, a Greystone executive who worked with Curtis on the deal, said that Karp was seeking a health care tenant to fill the space.

Once that happens, he added, the property, which was completed last year, would make a good candidate for permanent financing from either Fannie Mae or Freddie Mac — the quasi-governmental backers of U.S. housing debt — or from a securitized mortgage deal.

“One of the challenges was to close it on time,” Cristi said. “It needed to close by no later than November first, and we made that timeline within a very short window.”

Residents at the building, three blocks east of Prospect Park at the intersection of Nostrand Avenue get access to its private terraces, gym, bicycle storage and 33 parking spaces. Over the summer, two-bedroom units on the third and sixth floors rented for around $3,000 per month, according to data from StreetEasy, while a similarly sized unit on the 12th story went for $500 more.