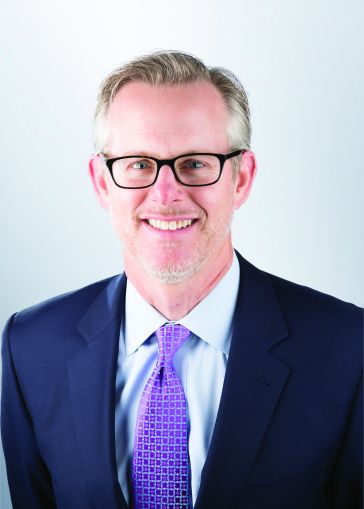 W. Todd Henderson, the head of the U.S. real estate investment business at DWS Group, doesn’t quite wear his Texas roots on his sleeves, but he does on his belt. On the day that Commercial Observer met the executive, late last month, he was sporting a large, Lone Star-themed buckle. But ensconced as he is within a major European-controlled investment platform, Henderson, a graduate of Wharton and the University of North Texas, speaks about real estate with a decidedly global perspective.

After getting his start at First Gibraltar Bank, Henderson did a stint at Washington, D.C.’s J.E. Robert Company before landing at RREEF, a Chicago-based asset manager with significant real estate investments and a heavyweight client roster. The year before, RREEF had been acquired by Deutsche Bank for $490 million, a move that immediately expanded the asset manager’s client base in Germany and continental Europe. And Henderson stuck with the firm through its rebrand to DWS and its structural spin-off from Deutsche Bank last year, when DWS began trading on Frankfurt’s stock exchange. (Deutsche Bank is still the majority owner.)

Late last month, CO visited Henderson, a measured and careful conversationalist, at his Midtown office to talk about foreigners’ interest in U.S. real estate and why the current cycle has his team leaning more heavily into the lending world.

Commercial Observer: Can we start with a brief history of DWS?

W. Todd Henderson: Our real estate business started in 1976 as RREEF, which was a private partnership up until the late 1990s. In 2002, Deutsche Bank bought the business. The RREEF business has operated very similarly to the way it operated, frankly, before it came into Deutsche Bank’s ownership. It’s a business that has always been a client-first, fiduciary-oriented, third-party investment-management business. And it continues to be that way, regardless of what name we have on the door, whether it’s RREEF, Deutsche Bank or DWS. It doesn’t matter what jersey we’re wearing.

How is having a large shareholder different than having a parent company?

It’s very different. DWS has its own executive board and it has its own completely independent governance structure. Here in the U.S. and globally, that has resonated very positively with our client base. It also has a different regulatory framework, because it’s an asset manager, not a bank any longer. That allows us to have a different compensation structure that better aligns our team compensation with the performance of the products that we are managing. That’s a very positive thing. Our clients are happier and our team is happier.

We have global institutional clients, which range from public pension plans to sovereigns to corporate pension plans. In addition to that, we also serve retail high-net-worth investors as well. In the Americas, the majority of our clients are institutional, although our retail high-net-worth segment is growing. If you look globally, the retail segment is probably 20 percent to 30 percent of our client base, because in Europe, we historically used, and still use, the Deutsche Bank branch network to distribute to individual clients.

Is commercial real estate more of a standard play in Europe for wealthy private investors?

Germans in particular, but Europeans as well, have looked at real estate as being an excellent alternative to a passbook savings account. But in the U.S. too, we’re seeing huge growth in the alternative sector, in retail investors. They’ve gone from basically owning real estate only in their home, to recognizing that [broader] real estate holdings make their portfolios much more defensible. In this environment where yield is king, core real estate is producing 4 percent to 5 percent yields. The cycle is also producing real estate capital appreciation that is very attractive relative to other asset classes.

You mentioned earlier that debt is becoming a more important and more permanent line of business for you. What’s been driving that activity this business cycle?

This cycle, more than past cycles, you’ve been able to originate debt at cash-flow levels and debt yields that provide cash flow all the way through the capital stack. It truly is a secure, yield-oriented investment. Whereas in past cycles, beyond the senior stack, you’ve seen it be much more transitional in nature. This cycle, lending markets have been more disciplined. As a mezzanine debt provider, you’ve been able to get cash flow coverage through your last dollar of attachment. In prior cycles, debt has probably been more tactical, at the end of a cycle, where people would look at it as a place to hide.

What kind of debt deals do you look for?

Our primary focus has been on transactions that we originate. It could be stretch senior to subordinate as well as agency, or subordinate pieces of agency.

With, as you mentioned, more and more lenders taking an interest in this space, has it grown harder to find deals?

We’re an active market participant, and we have 20 investment professionals that are sourcing across equity and debt. We’re known as a provider of debt and equity capital, so it’s not difficult for us to get access to transactions. Is it difficult to close transactions at the right risk-adjusted return? We probably close somewhere in the neighborhood of 10 to 15 percent of all the transactions that we seriously pursue. But of course, if you’re hitting 10 to 15 percent, you’re losing 85 to 90 percent, because you have a different view of the value, or the terms, or the risk than the competition in the marketplace. Now, we probably do 25 to 30 percent of our transactions a year off-market, which is relatively high. But given the competitive nature of the market, you have to expect that your overall hit ratios are going to be low.

Do you focus on gateway cities in the U.S., or have you made more off-the-beaten-track investments as well?

We have portfolio managers that are connected to some of the most sophisticated capital in the world, not just from a real estate perspective. Our alternatives business manages $100 billion, and if you look across the DWS space, which is active, passive and alternatives, that’s $800 billion. There are a tremendous number of signals around capital flows and investor preferences that come from that. That I.Q. tells us what markets and what sectors we want to invest in. We have about 26 markets that we cover in the U.S. We add markets occasionally, and take them out.

Can you give me a sense of some that have joined the list lately?

They’re cities where we are seeing significant population growth, significant job growth. And where there are supply constraints that will allow us to ultimately generate rent growth. Those are probably Sun Belt cities today. Austin, Texas; Nashville, Tenn.; some cities in south and central Florida. But we’re also cautious about adding cities, especially late in cycles.

When you’re considering a new market or a new asset class, how do you make sure you can beat the hype?

Tell me more about how you actually leverage that.

Well, first and foremost, it identifies where pricing may not necessarily reflect the conditions that we’re seeing on the ground. So if we’ve got guys that are out there pursuing acquisitions of properties, and we’re seeing in the last quarter, in a particular submarket, rent growth at significantly above where the market may be underwriting rent growth, that translates into our being able to identify a dislocation in the market that gives us a competitive advantage on a particular asset. By the same token, it can happen the other way around, where we see things slowing in a particular market. And as a result, we may fade that market or short that particular market.

Can you give an example?

We saw that happen in the Washington, D.C., market for a couple of years from an office perspective, one of the worst-performing office markets. We saw the disconnect between yields and what investors were paying, and we waited. And, in our industrial portfolio, we have seen a lot better performance in infill urban markets that are close to population basis. That’s a strategy that over the last two years or so people have really adopted. But we’d built a fund strategy on that basis three and a half years ago.

Have you grown any more concerned of late that the business cycle could be on its last legs?

We pay attention to the shape of the yield curve. For the first three quarters of the year, we’ve seen some yield curve inversion. We do think that that’s a good predictor of future economic recession. The timing is the question. Historically, it’s happened within two years or so of the curve’s inverting. So we do think that the risk has increased, but we don’t necessarily feel like it’s imminent. We’re at full employment, if not beyond full employment. We’re still seeing reasonably good fundamentals on the ground in the four major sectors.