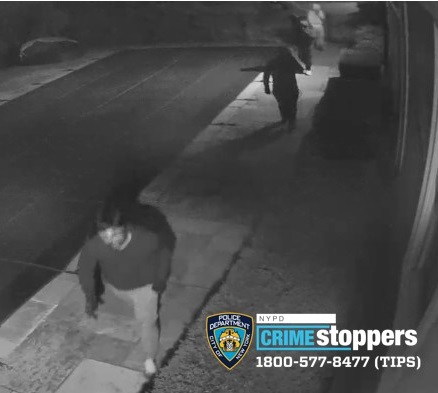 A group of thieves broke into Triple Five Group CEO Don Ghermezian's Bronx mansion and stole thousands of dollars worth of jewelry and luggage. Photo: NYPD

The owner of the American Dream Mall has just experienced a nightmare.

A group of crooks broke into Triple Five Group CEO Don Ghermezian’s multimillion, 11,000-square-foot Bronx mansion over the weekend and swiped $140,000 worth of jewelry and luggage from the home, the NYPD said.

On Saturday, at least four men got into Ghermezian’s home on Grosvenor Street in the Riverdale section of the Bronx by breaking into a rear balcony window at about 5:16 p.m. and made out with the pricey items, according to surveillance video and police. Nobody was home at the time of the burglary, police said.

Ghermezian told the New York Daily News that he was out of town at the time and found out about the break-in through a notification from his security system.

Ghermezian is the president and CEO of the family-run Triple Five Group which is behind mega-mall projects including the West Edmonton Mall in Canada and the Mall of America in Minnesota.

In October, Triple Five opened the first “chapter” of the 3.1-million-square-foot American Dream Mall in East Rutherford, N.J., after 16 years of construction and numerous missed deadlines. The first phase of the project has a Nickelodeon-themed indoor amusement park and an ice-skating rink.

All told, the American Dream Mall — which began its life as Xanadu in 2003 — will have 1.5 million square feet of retail, an indoor ski lift, a DreamWorks-branded indoor waterpark, a Cirque du Soleil venue, a National Hockey League-sized ice rink, two hotels and a convention center.