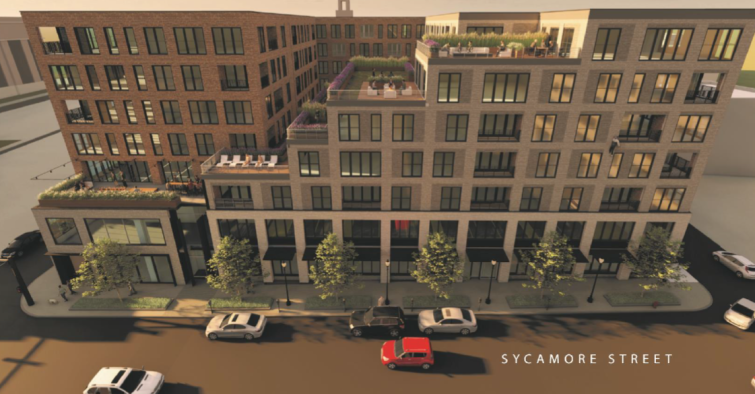 A rendering of 1118 Sycamore in Cincinnati. Photo: Acres Capital

Acres Capital is extending a $38 million construction loan to the developer of a planned Cincinnati multifamily project, Commercial Observer can exclusively report.

The two-and-a-half-year loan will fund Charles Street Investment Partners’ new residential development in the city, a 155-unit building at 1118 Sycamore Street, about half a mile north of the city’s central business district in its Over-the-Rhine neighborhood. The building, designed by Seattle’s NBBJ, will also have 12,500 square feet of retail space as well as a small 3,611-square-foot office component.

Mark Fogel, Acres’ CEO, said that the multifamily-heavy balance in the mixed-use property could help the project qualify for a future agency refinancing once construction is complete.

“When we think about multifamily, we don’t want to have too much retail or office, because there’s a constraint from permanent lenders,” Fogel said. “The Fannies and Freddies of the world, they’re constrained by their rules. They can’t take on a building with more than 25 or 30 percent [of other uses].”

Four residential units, styled as “townhomes,” will have their own individual entrances from the street. The seven-story project is also set to include an amenity deck on the third floor with a pool, barbecues and a fire pit, as well as a dedicated two-level garage for residents.

Over-the-Rhine, originally developed as a working-class residential neighborhood during the nineteenth century, is “one of the largest, most intact urban historic districts in the United States,” according to a neighborhood preservation group, which compares the district’s architecture to historic sections of New Orleans, Charleston, S.C., and Savannah, Ga.

In the early 2000s, the area had become one of Cincinnati’s most dangerous and derelict. But over the next decade, a nonprofit called Cincinnati Center City Development Corp., with cooperation from the city, led the neighborhood’s revitalization.

Now, the colorful, walkable district features dozens of restaurants and bars. 1118 Sycamore might bring another yet to the neighborhood: Fogel suggested that an eatery could be a good fit for the building’s retail space.

“We look forward to a successful partnership in such a dynamic, historic market as Over-the-Rhine, an urban revitalization story almost unparalleled in this real estate cycle,” Jason Pollack, a Charles Street executive, said in a statement.

Favored in the 19th century for its prime location on the Ohio River, the city declined significantly during the second half of the 20th century, losing population in every decennial census between 1960 and 2010. The federal government’s latest population estimate, however, shows a slight uptick in inhabitants in the eight years since then.

Cincinnati still hosts MLB and NFL teams and its soccer team, FC Cincinnati, joined Major League Soccer‘s top division last year in an expansion for the league. Procter & Gamble has been based there since its founding in 1837. Other corporate lifers include retailers Macy’s and The Kroger Company.