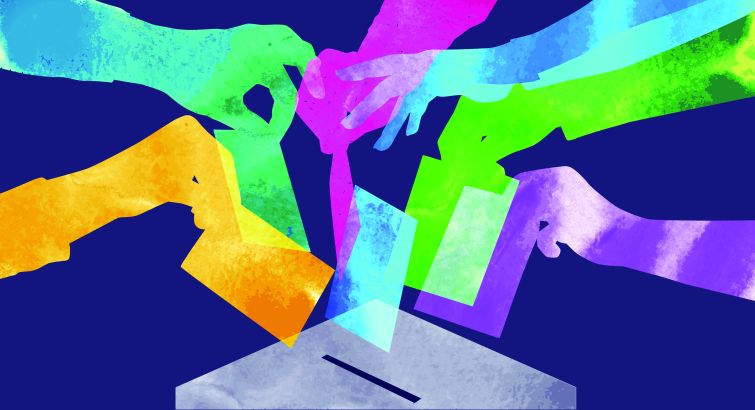 Good evening and welcome to the Elephant and Donkey, home to New York’s juiciest steaks and gossip. Oh, you’re here for Commercial Observer’s politics salon? Yes, this year’s young-professionals honorees are all here, chatting it up over a scrumptious five-course meal about the passions they usually reserve for the voting booth. Can I get you a table? A party of one, I see? Well, so long as you’re feeling partisan tonight…

Ah, yes, quite right. That is Mitchell Forman in the far corner, the New Line Structures project director. But I’m not sure you’ll want to join him for dinner — not, that is, unless you find tax policy scintillating. Yes, I’m afraid that’s his No. 1 concern on Election Day, as he told me himself! Indeed, that whole raucous table is a bunch of tax nuts: Joe Scarinci, Kevin Davenport, Christine Colley … all of them have told me directly that no issue stirs their political fervors more hotly! Maybe not great dinner company at all though, wouldn’t you agree?

Oh, I didn’t know you and Maurice were friends! Are you his colleague at Cushman & Wakefield? If you’re in no rush, I’d be glad to seat you with Mr. Suede, but I’m afraid he’s running quite late: stuck on the IRT. No good at all! Maybe that’s why fixing the subway is his top priority for the government.

By the way, would you care to hear tonight’s specials? The scallops are simply to die for. But if you absolutely can’t decide, feel free to dine with Sayo Kamara, the Colliers leasing associate. His biggest concern is income inequality, so at his table, everyone gets the same dish! And look there, Zachary Redding is tucking in beside him. He’s a nut for economic reform. (I think I know which one earns more — but I’ll never tell unless you slip me a $20 by the coat check!)

But watch out! You almost burned your sleeve walking past Katie Miller — her flambéed steak Diane is still smoldering a little as she waits for it to cool. She’s liable to be just a bit sensitive to temperature, given that her top concern is climate change, but she’s certainly in good company. The Dewberry Engineers project manager is hardly the only green-policy supporter, joined by, well, let’s see, Bryan Kirk of B6 Real Estate, Molly Dee of Jaros, Baum & Bolles, Square Mile’s Sean Reimer. Yes, that crowd is by far the biggest single-issue bunch we have on hand tonight. They’ve already made it through five bottles of Riesling! One sure hopes that temperatures in Baden-Württemberg will remain steady for decades to come …

I see you’re squinting at the last table in the rear, and it is rather dark back there, isn’t it? I’ll never understand it myself, but some of our most valued diners like it that way, in fact, preferring to keep their political views anonymous. One, for instance, is passionately pro-gun control. “These incidents with these shootings. It destroys families and I think it’s so unfortunate,” he said. Another is outraged by heartbeat bills — laws that aim to prohibit abortion after the fetal heartbeat begins. “It’s extremely divisive, and it has a huge impact on women and families,” he said. Unwilling to put his name to the statement, however, he’ll be dining in the dark for now.

Of course, if you’re looking for something from a more international menu this evening, feel free to take a chair over there besides NKF’s Alexandra Tennenbaum or Savills’ Jacob Stern. They’re a pair of absolute wonks for immigration policy.  Or you could ask Eli Meltzer if he’ll share his shakshouka with you. You’ll be sure to get an earful about U.S. policy towards Israel, though.

In the end, it can’t hurt to pick our friendliest table, now can it? That would have to be that round one in the middle, where Andrew Stainforth, the L&L Holding V.P. is clinking glasses with Kushner Co.’s Max Swerdloff and SCG Retail’s Jenna Heidenberg. All three of them, politically, desire nothing more than equal rights — across races, genders, sexualities. Now can’t all of us get behind an ideal like that? How cheerful they look, savoring our pastry chef’s rainbow soufflés. Now there is a group of open-hearted souls. What a warm bunch.