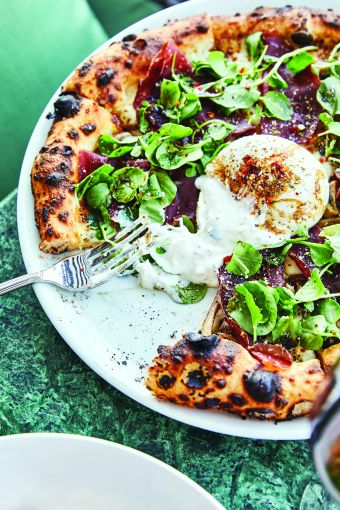 You hear that a lot in business, so we figured that the Class of 2019 knows where to eat and that we should ask them their favorite restaurants.

Of course, some of the places that the ‘19s mentioned may not be close enough for your next power lunch. Joseph Scarnici likes the Inn at Pound Ridge, Jean-Georges Vongerichten’s Westchester restaurant. (Upstate New York and Long Island seemed to attract a number of our honorees: Tre Angelina in Monroe is Victoria Della-Peruta’s favorite, and Dale Koch likes Main Street Café in Northport.) But the person who wins the prize for the farthest to go for a good meal would have to be Martina Botturi who chose Hong Kong’s Yardbird. (To be fair, she was in China to design the Hong Kong Sanatorium Hospital and “its sister, Yakido, will open in L.A. early next year and it’s an exciting project I’ve invested in.” Must be good!)

Some of our chosen real estate pros prefer the simple pleasures: A good Chinese restaurant (Joe’s Shanghai is Andrew Staniforth’s place of choice for himself and his boyfriend); a diner (Joe Jr. for Cara Chayet); chicken fingers (Sticky’s Finger Joint, Amy DeLuca) and, of course, pizza (Luzzo’s for Alicia Parente, Speedy Romeo for Christopher Walther, and Carlo’s Pizza in Port Washington for Dylan Kane).

Some went for Asian restaurants like Nobu (Maurice Suede) and Han Dynasty (Sean Reimer), but two kinds of cuisines blew the rest away. These brokers must have tomato sauce running through their veins, because Italian was the dominant restaurant. Among the Italian favorites on the list were Carbone (David Grobman); Bar Pitti (Renee Tabache); Malatesta (Zachary Redding and Sayo Kamara); Missy Robbins’ Lillia (Jordan Bargas) and her other restaurant Misi (Julia Grabazs); Park Side Restaurant in Queens (Jacob Stern); Cecconi’s Dumbo (Tobi Abere); Quality Italian (Yasmin Kheradpey) and L’Artusi (Shivam Patel) — there were others, but we had to cut it off somewhere.

And, no real surprise, they love their steak. Keens won accolades from Danny Donev and Michael Kipfer, Old Homestead got the vote of Conor Krup and 4 Charles Prime Rib captured the hearts of Marko Kazanjian and Max Swerdloff. “Keeping it kosher,” Ariel Benyacov said his favorite was Reserve Cut, and other Kosher joints like Le Marais (Pinchas Vogel) and Boeuf & Bun (Eli Meltzer) found favor. But it wouldn’t be a broker’s eats list without Peter Luger, the favorite of Ryan Ur and Bryan Kirk.