Tourists Flock to the Stock Exchange. Will the City Fix Up the Streets Around It? 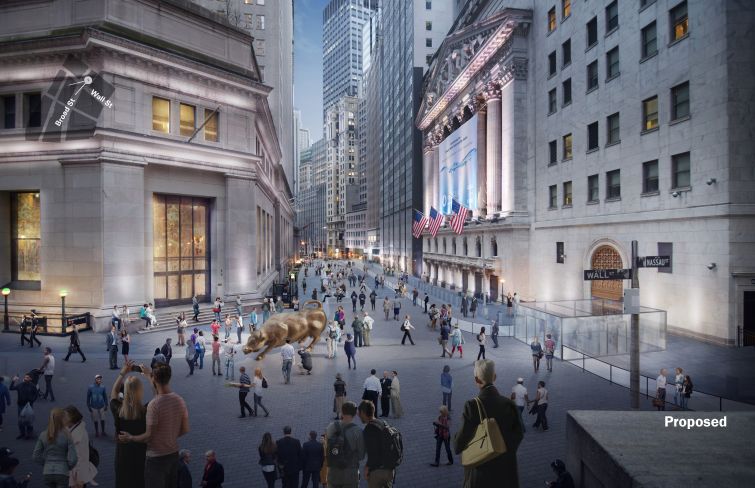 While most of the Financial District has moved on in the 18 years since Sept. 11, the New York Stock Exchange is still surrounded by forbidding security measures that were installed in the wake of the terrorist attacks, which shut down the exchange for four days.

A short, black metal security fence circumscribes the Stock Exchange at the corner of Wall and Broad Streets, extending 27 feet out from the building and into the street.

There are large bronze blocks and a delta barrier to block car traffic south of the exchange on Broad Street, along with a security booth with metal detectors in front of the exchange where workers and visitors have to line up to enter the building. The narrow alleyways that crisscross Broad and Wall Streets, New Street and Exchange Place,  are dark and cramped, perpetually roofed over with construction scaffolding.

The Stock Exchange, as well as Federal Hall across the street, are some of the city’s most popular tourist destinations. Millions of people visit annually, but the area is confusing for pedestrians and drivers to navigate. So, a few years ago, the Alliance for Downtown New York convened a committee of local landlords, business owners, politicians and city officials to craft a new, more pedestrian-friendly vision for what it dubbed “the Stock Exchange District.”

The redesign of Wall and Broad Streets “needs to be addressed,” said Brookfield Properties chief Ric Clark at a recent Commercial Observer event. “Imagine a tourist saying, ‘Geez, I gotta go see Wall Street, the financial crossroads of the world.’ And then you show up and look around and just — ugh. That needs to be addressed and money needs to be raised to implement that plan.”

The proposal, designed by WXY Architecture, calls for converting Broad Street and its corner with Wall Street into a curbless shared street, adding new lighting and seating, and installing new modern security infrastructure around the stock exchange.

While there is currently some seating on Broad Street, it is mismatched and there simply isn’t enough of it, the Downtown Alliance argues in its report on the redesign, released last year. The plan also suggests adding planters that could serve as seating and bollards that could function as light sources, both in order to save space on the street. The street paving is also mismatched and hasn’t been maintained well, per the report, and it could be replaced with stone that is both more historically appropriate and durable.

In addition, the Alliance wants to pilot a program that would allow delivery trucks to park in a space off Broad Street, with drivers bringing goods to individual buildings using a hand truck or small van. Currently, New Street and Exchange Place, which are filled with pedestrians from neighboring office and residential buildings, see anywhere from 50 to 100 vehicles a day.

“They’re dark, and they’re very active alleyways,” explained Downtown Alliance head Jessica Lappin. “And they need to be both for the tenants and for commercial deliveries. They can be brighter, more welcoming. And there’s been so much residential [added] since 2001; there are a lot of people who live on Broad and Wall Streets.”

The May 2018 plan also suggests that overhead cable lighting and architectural lighting built into the surrounding buildings could be used to help light New Street and Exchange Place. The two alleys are narrow enough that traditional streetlamps might make them feel more cramped. Replacing the current black security fence with clear panels would also help the entire area, including Wall Street, feel more open and pedestrian friendly, according to the report.

The Downtown Alliance and its backers, which include many of the area’s largest landlords, also hope to organize events and concerts on Broad and Wall Streets.

“The steps of Federal Hall function as a natural amphitheater and you can imagine having events on Broad Street,” said Lappin.

He also supported pedestrian improvements for Exchange Place, which he noted has become much more residential over the past decade.

“We proposed having better lighting at night, and I think [the Alliance] did a great job having the building owners cooperate with each other and with the city to show that the streets could be more welcoming and safe and warm than they are right now,” Steinwurtzel said.

The Alliance’s plan would cost an estimated $25 million to execute, according to Lappin, and the group is exploring state, federal and city dollars to complete it. The organization would also be willing to raise private funding from local landlords and other sources, she said. City officials have not yet committed to executing the street redesign, which would have to be handled by the city Department of Transportation.

However, the longtime civic leader is skeptical that the updates will happen anytime soon.

“In early 2020, the city is finally going to break ground on a plan to improve Water Street, parts of which we proposed a decade ago,” Lappin said. “But I also appreciate that smart, thoughtful planning and projects of this magnitude often take a while. I think it will be worth us persevering.”