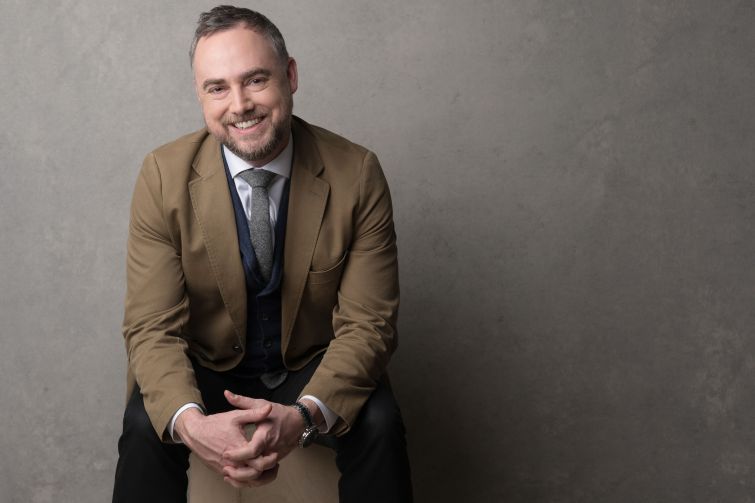 Gavin Hughes Daniels is a straight-talker. And his authenticity may be what helps put his clients, who are often going through the stressful process of moving and designing new office spaces, at ease.

“In this office, we balance this idea that you can be anybody you want. When our clients come here, they don’t have to be the person they are at work—they don’t have to sit up straight and only say things that are perfectly correct,” says Daniels in a recent interview in his office at Wingate Hughes Architects.

Daniels, who lives in Cheverly, Md. with his wife and three daughters, planted roots in Washington after receiving his master’s in architecture from Texas A&M. “I came up to D.C. during my spring break from grad school in 2004. I remember seeing Douglas’ building when they were doing the Spy Museum. There was this respect for old stuff here and really beautiful new architecture,” he says. “I lived in Houston, Dallas and San Antonio and I love certain parts of all of those cities but in this one, history and future were really coming together.”

Daniels served as a project manager and senior project designer at three architecture firms in D.C. before co-founding Wingate Hughes. Gleaning from the spirit of its founders, the firm has positioned itself as an outlier among its competition. “We’re that company that people couldn’t be, but they love being friends with it—they like being part of the experience,” he says. “Our experience is a little raw, a little gritty, a little rebellious, a little punk rock, a little slow jam — but it’s cool.”

After more than a decade in the industry, Daniels reflects on design trends in D.C., how the industry failed a generation of millenials, and gushes over his favorite projects.

Commercial Observer: The firm has grown to 26 employees. Does that mean that you’re more hands-off with clients?

Gavin Daniels: For us, 26 isn’t a lot of people until we start talking to other folks and they said that’s a lot of people. It’s just organically grown and we have the best set of leaders in our office. My job is really to make sure they know everything in my head and that they’re learning from me everyday.

I design for the majority of the projects because I love it, I’m really good at it now and my clients come here for my design. So in order for me to be able to do that, I really have to count on people to take the design vision to the next level and do the nuts and bolts of contract documents and construction drawings.

I read in a previous interview that Wingate Hughes was tackling wellness in design before it became a trend, can you expound on that?

A huge part of it for me is focusing not so much on the nuts and bolts of wellness. I feel like the certification is overwhelming for people. We even tried it in our office and it was daunting to figure out how much it was going to cost. Much like LEED,  I think wellness is going to go through some more evolution but the fundamental part of it is correct—make places healthier for people. And we realized as we started learning more about the nuts and bolts of wellness that we’ve already been doing it—now we have a way to talk about it.

We have a direct hand in improving people’s lives every day—that’s a big responsibility and it’s really fun to be able to think about because we’re pretty damn good at it.

What other trends are you seeing in office design?

Learning in the office is something that a lot of people are thinking about. Finding ways to get better at your job everyday improves your own personal satisfaction. Growing as a person everyday at work is important.

We’ve said for years it’s all work, it’s all life—there’s no work life balance. Balance means that work and life are 50/50. We all know they’re not. So, how do you enjoy both together and find that blend? It’s not how long can I stay at work playing ping pong – people tried that. It’s how do I get better personally for myself?

So how does the need for learning and education translate into the design of a space?

More types of spaces. It’s not just here’s your desk and here’s a little couch. We’re challenging what an office is right now. Is an office really four walls and a door? Maybe not. It’s thinking about rooms like a hobby room. Finding ways to get up from your desk and do another activity is really important in shifting the way you think.

And the type of space that you’re sitting in is very important. So you have to give people those types of spaces and they cannot be controlled—you have to allow them to do it their way. Give them a place that they can comfortably make decisions about the way they want to work and not feel like they’re breaking a rule or being a renegade—get that stressor out of there.

Any other notable trends?

I believe more people are going to be staying at the same job longer. I believe the next generation wants that. And with that goes some level of personalization in a space—whether it’s a workstation or an office. They want to be able to personalize where they work.

As the millennials were going through, I feel like we made a huge mistake. Everybody said, ‘Well, they’ll tell us how they want to work.’ Really? That’s like sitting a toddler in front of a refrigerator saying they’ll figure out how to eat. People just getting into the workforce don’t know how to work, they don’t know what they need and I think we took too much of a hands-off approach to that. And millennials are now kicking back saying, ‘You told us to do it all by ourselves and gave us no tools to do it then you said we’re all lazy and want stuff all the time. Those two things can’t go together, guys.’ So I think there’s a big reconciliation about what happened in the workplace.

What’s an example of a space designed poorly for millenials?

Having bean bags everywhere, having them work in any style they want to. There was never any structure given to them about how to work effectively and efficiently. It was more mentorship—and the mentorship was more spirit animal and less how do you write an email to somebody, how do you focus on getting your job done and not being on Facebook while you’re at work all the time.

You designed Inclusive Innovation Incubator (In3), a partnership between the D.C. government and Howard University, which is reportedly the city’s first space focused on inclusion, innovation and incubation. What was your thought process in designing that space, given its mission?

That was such an awesome project that fulfilled so many different things for me. I thought about the hustle and bustle and all that’s going on outside—traffic going, people walking. I wanted you to see that space from outside and look in and say, “Whoa, what is that?’ What better kind of place for that mission?

When you walk into that space you can’t help but look up. Hold your head high—you want to do it everyday but life gets to you.

There are people in this world who will not be able to do it on their own—something is against them, something has happened that they need help. You can’t always work harder, get a better job, or find funding. But when all is against you, being able to walk into a place like that and look up, [it] changes something in your mind. That’s important. That’s part of what I wanted to give to them.

Are there any other standout projects that you’ve completed recently?

March of Dimes. I’m a past chairman of the DC region board and I’ve raised millions of dollars for them over the years. They moved from White Plains, N.Y. to here and I got to compete and win the commission to design that space. That was just spectacular. We used the same notion at In3—a big key to that space is hold your head high.

This space is about strong women, about supporting families, and giving the babies a fighting chance. So I knew the space for them couldn’t be ‘Oh, it’s for the women, they’re kind of dainty so it needs to be soft and curvy and delicate.’ Women are, of course, caring and embracing and it needs to feel that way but you don’t pander. I’ll be damned if you try to pander to women these days — that’s crazy.