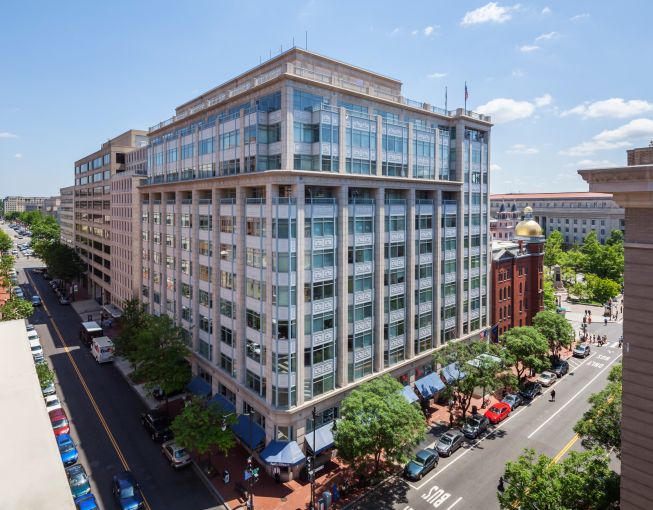 Paramount Group has sold Liberty Place, a 172,000-square-foot office building in Washington D.C.’s East End neighborhood, for $154.5 million, according to a statement from the New York-based firm.

Paramount will use proceeds from the sale of the property, located at 325 7th Street NW, to fund its share of the acquisition of Market Center in San Francisco, the company said. In August, the firm said it was acquiring the 735,000-square-foot office complex, located at 555 and 575 Market Street, for $722 million. It said it planned to bring in a joint-venture partner prior to the deal’s closing in the fourth quarter.

The sales price of DC’s Liberty Place reached about $900 per square foot, while the acquisition price on San Francisco’s Market Center translated to $959 per square foot, according to statements from Paramount.

“We continue to execute on our capital recycling strategy by selling stabilized assets at attractive prices and redeploying that capital into higher-growth opportunities, such as Market Center,” Albert Behler, the CEO at Paramount Group, said in prepared remarks.

Liberty Place was purchased by Chevy Chase, Md.-based investment firm Artemis Real Estate Partners, according to the Washington Business Journal, which notes that the building is 92 percent leased to government affairs tenants such as Fidelity Investments, Alibaba Group Holding and ConocoPhillips.

Michael Vu, a principal at Artemis, told WBJ that “the location and quality of this building will continue to be attractive to Fortune 50 companies” and the firm does not plan to make any major renovations to the building.

While this is Artemis’ first D.C. office acquisition, the firm recently acquired a Hyatt hotel in Georgetown for about $44.3 million, per WBJ. In 2018, the company partnered with Jair Lynch Real Estate Partners to purchase a 150-unit apartment building in D.C.’s Takoma neighborhood for $50.6 million, as Commercial Observer previously reported.