New Jersey’s Mall Scene Is Standing Tall, Even With the Threat of the American Dream 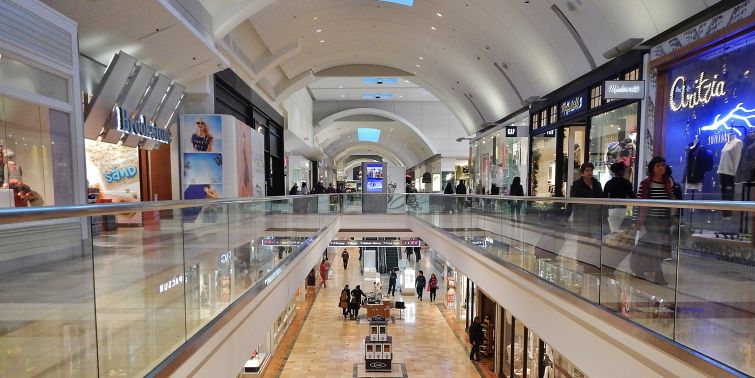 The Westfield Garden State Plaza in Paramus, N.J. has been ranked as one of the most valuable malls in the country. Photo: Wikimedia Commons

New Jersey is known for many things: Bruce Springsteen, the Shore, Frank Sinatra and pork rolls. But it’s also a state jam-packed with malls.

The Garden State has 28 enclosed malls dotting its 8,729 square miles, earning it the distinction of having more malls per square mile than any other state in the country, according to NJ.com. And while malls around the country have been plagued with vacancies as retailers like Sears and Forever 21 have filed for bankruptcy and shuttered outposts, malls in New Jersey have survived relatively intact.

“New Jersey has never felt the bad times and the vacancy rates that the rest of the country has,” said Florian Suserman, a partner in brokerage firm Ripco’s New Jersey office. “With the discretionary income here, and the number of high-income individuals, as long as that’s here we’re OK.”

The average vacancy rate for regional malls across the country was 9.3 percent in the second quarter of this year, but the average availability rate was only 3.7 percent in New Jersey in the first half of 2019, according to data from Reis and Colliers International.

Malls in Northern New Jersey have tended to be a stronghold in recent years, but a giant new competitor is about to start knocking on their doors. The American Dream Mall is slated to open its doors in East Rutherford, N.J., later this month after nearly two decades of construction. The 3.1-million-square-foot center is opening in stages and daring to siphon away tenants and shoppers in the area.

For now, most malls in New Jersey are “performing well” and major owners like Simon Property Group and Brookfield Property Partners view them as key assets in their portfolios, said regional mall guru Thomas Dobrowski.

“There’s not really an active desire on behalf of mall owners to sell those assets,” said Dobrowski, who handles regional mall investment sales for Newmark Knight Frank. “These are core assets for the big owners.”

An analysis by Boenning & Scattergood done for CNBC in January found that the Westfield Garden State Plaza in Paramus, N.J., was the seventh most valuable mall in the country with $950 in sales per square foot and a valuation of $2.17 billion. The 2-million-square foot mall is, for now, the largest mall in New Jersey and it’s in a zip code whose more than $6 billion of retail spending outpaces places like Rodeo Drive in Los Angeles, NJ.com reported.

But it’s not just Westfield Garden State Plaza that’s doing well in this struggling retail climate; Dobrowski also pointed to the Willowbrook Mall in Wayne, the Menlo Park Mall in Edison, and the Mall at Short Hills in Short Hills as strong New Jersey assets. From March 2017 to March 2018, the Mall at Short Hills had sales per square foot of $919, a 10.9 increase from the previous 12 months, Women’s Wear Daily reported.

These malls haven’t been immune to the struggling retail climate — Saks Fifth Avenue ditched its 132,000-square-foot outpost in the Mall at Short Hills for the long-delayed American Dream Mall — but owners have been able to fill the space with things like movie theaters, breweries, grocery stores and yoga studios, Suserman said. (Coworking provider Industrious took 30,000 square feet of Saks’ former space in Short Hills.)

“Malls in Northern New Jersey are morphing with the marketplace,” said Suserman. “The demand of the consumer is changing as some stores are closing, some stores are relocating, and some stores are getting smaller so the demand for these other types of users has exploded.”

Suserman has been working with go-karting chain Andretti Indoor Karting & Games to find an outpost in New Jersey focusing on space in or adjacent to malls, which wouldn’t have been an option for the spot in previous years.

“The mall owners would never look at these types of users,” Suserman said. “The consumer demand, the lack of expansion by other retailers and the available vacancies are what’s allowing these new levels of options to come into these centers.”

But it hasn’t all been rosy for malls in the Garden State. Dobrowski said malls in towns further away from city centers like Philadelphia and New York City have dealt with much of the same issues of loss of anchor tenants and swaths of empty storefronts as other parts of the country.

“You have a shopper base [there] that, over time, is more inclined to shop in off-price and discount retailers,” he said. “You don’t see that as much in more primary markets.”

Since 2010, the Burlington Center Mall in Burlington Township lost its Macy’s, Sears and swaths of smaller tenants until it eventually closed in 2018, the Courier Post reported. The vacant property sold in February to Las Vegas-based developer Moonbeam Capital Investments for $22 million, according to the Courier Post.

Both Dobrowski and Suserman said they don’t expect American Dream to cause much trouble to malls in the area once it fully opens. American Dream will attract more than just nearby residents into its doors, like tourist visiting New York City, and for day-to-day shopping, most locals will visit their usual malls, Dobrowski said.

“There’s always going to be some immediate impact when a new property comes online,” Dobrowski said. “But the shopper that is inclined to go to the Mall at Short Hills or Garden State Plaza is not going to just transition to American Dream.”