Meet the Lawyer Trying to Rein In NYC Construction Costs 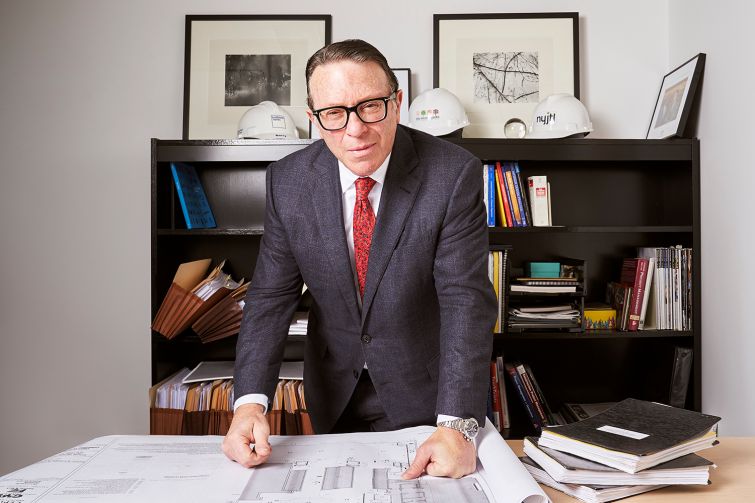 Barry LePatner is on a mission to rein in construction costs and unreliable contractors in New York City. The 72-year-old lawyer claims he’s developed a way to prevent contractors from fleecing owners and to hold them accountable for the work they’ve promised to complete.

His system is more than just project management software, which is already used by the largest contracting firms. He also works with architects and engineers to create a thorough model of the building before workers break ground, because he says that most project delays and cost overruns come from incorrect or unfinished plans. Then once the construction team agrees that the model is complete, the contractor agrees to a fixed price for the work and a date by which they must complete construction. LePatner then draws up an agreement that holds everyone involved accountable and requires that if there are delays, the contractors, rather than the owners, cover the additional costs.

“We have taken the risks of all that uncertainty away from the owner world,” he said.

The Brooklyn native has been representing architects, developers, contractors and commercial tenants for decades, but he recently launched a new construction consultancy called “Insights+.”

“My clients would say to me, ‘Barry, I don’t trust the contractors, I don’t trust what they charge,’ ” he explained. “We sit with clients and with software we’ve developed over decades, we roadmap from plans to occupancy for the building and find all the places where risks could happen during the project.” Then his firm helps the owner hire architects and engineers who are familiar with the technology he uses — a fairly common type of engineering software known as building information modeling — and brings in a team of contractors to completely evaluate the project. They extensively document where the beams, ducts, piping and utilities will be located and try to incorporate that information into the model, so that LePatner can develop an accurate cost estimate for construction.

He’s worked on a diverse array of projects over the past two decades, including the Tiffany flagship in Soho, the Goldman Sachs headquarters in the Financial District and Jersey City, Starwood’s conversion of the former Doral Inn Hotel on Lexington Avenue to the W Hotel (now known as the Maxwell Hotel), the renovation of the Four Seasons Restaurant, and the construction of the Carrie Leeds Tennis Center in the Bronx. He claims he’s even working with a city agency that’s notorious for cost overruns, but he wouldn’t disclose which one. (Not the MTA, he said.)

Long before he became a lawyer, LePatner grew up in Bensonhurst and Midwood and attended Brooklyn College. In his early 20s, he went to Brooklyn Law School at night and worked as a teacher at a school in southern Crown Heights, where he was the dean of discipline. These days, he still enforces the rules, but against troublesome contractors who are derailing construction projects.

LePatner began his legal career at an insurance defense firm, now Wilson Elser Moskowitz Edelman & Dicker, where he represented architects, engineers and contractors involved in failed construction projects. In November of 1980, he left to start his own firm where he continued helping folks in the construction industry untangle developments where work had ground to a halt over unpaid invoices and cost overruns. He largely built his practice representing architects who hadn’t been paid for their services and helping owners file claims against contractors and subcontractors.

More than 90 percent of construction projects in the U.S. face cost overruns and delays, LePatner claimed, pointing to a 2017 McKinsey report on the industry. He developed his method because “the plans prepared by the architects and engineers are never complete and problems arise during construction that are never ascertained upfront.” Then, “contractors always complain that they don’t get adequately designed plans and that’s how they justify submitting their change and delay orders.”

Having a complete model of the building before construction begins helps all the parties involved in a complex project ensure that work happens on schedule and everyone gets paid.

When asked to explain how his approach works in the real world, he told the story of a hotel developer who was worried about cost overruns on a New York City project.

“I called the excavation guys and I asked for a fixed price,” the attorney explained. “And they said, ‘We don’t know if there’s a stream or rocks under there.’ And I said, ‘You’re right, I’ve arranged for a boring company and [I’m going to have] them talk to you about how many holes you’re going to bore and help you understand what the subsurface conditions are.’ And the excavation company said, ‘I hope your client appreciates that you saved them seven figures while the construction team spends four months redesigning the building.’ ”

Anthony Robbins, a former executive vice president at jewelry seller Tiffany & Co., met LePatner when he was a young, freelance architect. Almost 20 years ago, Robbins was working on a 40,000-square-foot expansion of a store for British luxury brand Asprey in Trump Tower when construction hit a snag.

“It was incredibly complicated and difficult and various famous people like Norman Foster [were involved],” said Robbins. “They entered a contract that was ill-advised, and Barry had to make it work for everybody.”

The pair worked together again a decade later on the construction of a Soho flagship for Tiffany, which opened in 2012 at 97 Greene Street.

“He’s very bright and creative, which I think in legal circles is not always admired,” Robbins noted. “He would always figure it out. In other words, if you find yourself in the uncomfortable situation where you only have one call to make, you want to call Barry.”

Dean Poll, who operates the restaurant and bar at the Loeb Boathouse in Central Park, credits LePatner with helping him win the contract for the New York City institution 19 years ago. “I got the RFP [for the Boathouse], and it looked like Chinese to me; I didn’t understand it at all,” said Poll. “So I reached out to Barry, and he said, ‘We probably won’t get it but at least we’ll know how the system works.’ And then we got it.”

He noted that LePatner had helped him prepare RFPs for several other city projects in addition to the Boathouse. Just like Robbins, Poll said LePatner “thought outside the box” and would drop everything for a client who needed him.

LePatner is also respected by his peers. Robert Ivanhoe, a partner and chair of the global real estate practice at Greenberg Traurig, said LePatner was his go-to guy for complex construction questions. The two have been friends for 30 years — so long that Ivanhoe couldn’t remember how they met. The veteran commercial lawyer has also advised LePatner on real estate cases and given him advice on his budding construction consulting business.

Ivanhoe explained that once LePatner started speaking at conferences and events about how contractors often overcharged owners, the latter became something of a specialist in the world of construction and gradually moved away from his litigation practice. “He became the guy who, better than anyone else, understood how subcontractors and general contractors ‘beat’ owners and was often called in when projects had problems, whether they were cost problems, delay problems or actual construction problems. Like if a building was failing because of bad structural engineering, [he would be called in] to forensically figure out what went wrong.”

The attorney said he had seen firsthand how his friend could untangle tough construction disputes.

“It’s a notorious situation in construction where everyone points at each other, ‘It wasn’t me, it was the concrete guy,’ ” Ivanhoe explained. “And someone else will say, ‘No, it was the engineer who gave us bad tech.’ And the engineer will point at the architect. One time there was a construction defect in one of the projects we were working on, and he found out who caused it and got them to step up to the plate very quickly. And he cut out a lot of the process of what it would have otherwise would have happened. Just the process of getting to whose fault is it before you even get to litigation.”