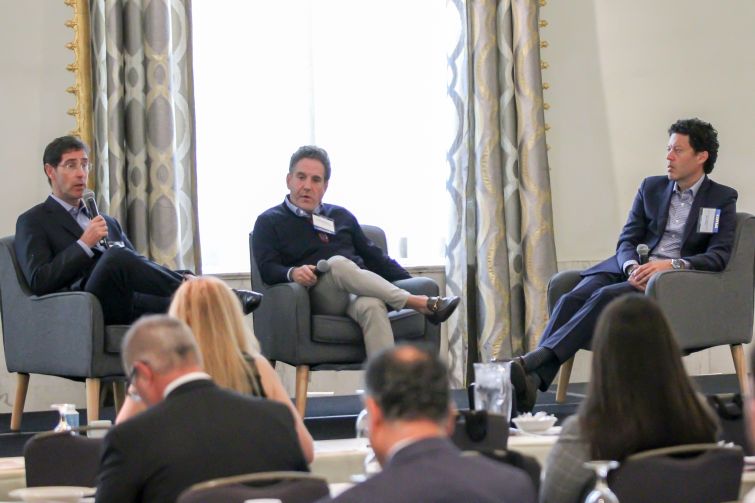 All eyes were on D.C. last week due to certain newsworthy events, but some of commercial real estate finance’s brightest stars found themselves in the nation’s capital for an entirely different reason. No, we’re not referring to Ackman-Ziff President Simon Ziff’s 55th birthday (although Commercial Observer’s Third Annual Financing CRE Forum did fall on the same day).

Ziff moderated a cozy fireside chat between Blackstone Real Estate Debt Strategies Chairman Michael Nash and Square Mile Capital Management CEO Craig Solomon. The heavy-hitters discussed a variety of topics including the low interest rate environment, with Nash asking Solomon if it ever tempted Square Mile into borrowing extra dollars. He replied no, as the firm is “allergic to too much leverage.”

The equity side of Square Mile’s business has evolved over the years from the firm investing opportunistically to thematically. “We develop conviction around a theme and invest into that trend,” Solomon said.

While Solomon said he finds investing in D.C. to be “a bit expensive,” Nash said he digs its vibrant economy: “It’s a beautiful city with a high-quality workforce. We’d look at any deal in D.C.”  In June, Blackstone was part of a Wells Fargo-led syndicate that closed a $800 million refinance for The Wharf, a mixed-use project, one of the largest financings in the city’s history.

The good news? Neither Solomon nor Nash see a recession on the horizon any time soon. Phew! “There’s so much liquidity in the market, way more than in the past, and the trade war hasn’t pushed us into one,” Nash said.

Ending the fireside chat with a cozy feeling, Solomon told the audience that “we should all feel very bullish about what we do, because U.S. real estate continues to be a safe haven for capital.”

The positive feeling carried over, somewhat, to the first panel — moderated by Michael McCarthy, a partner at Stroock & Stroock & Lavan — where traditional and non-traditional lenders discussed market highs and lows from their individual industry seats.

The general consensus was that fundamentals remain strong for the most part, but there are some problem areas popping up here and there.

“We look at asset quality as an indicator of where we are in the cycle, and we see very little deterioration,” Tim Leon, an executive vice president at Citizens Bank, said.

“We’re not seeing a lot of cracks in the market,” Square Mile managing director Matthew Drummond chimed in, but “there’s a chase for yield and we’re seeing people getting into student housing when they don’t know how to operate it.”

However, Invesco Real Estate’s Yorick Starr said he’s seeing some market deterioration in terms of deal structure. He also expects some industry consolidation at some point (“there’s too much capital chasing too few deals”) and he has his eye on the impact of rent reform as well as coworking woes. “We’re being very thoughtful and disciplined in the way we approach deals,” Starr said.

Indeed, “the rent laws have created a tremendous amount of uncertainty,” Tony Fineman, the head of Eastern region originations at ACORE Capital, concurred. “People who have never bought anything outside of New York City are now buying in Alabama.”

Wherever they’re buying, the bridge lending space continues to be one of the most crowded lending segments, and in the second session, Apollo Commercial Real Estate Finance Managing Director Catherine Chen joined panelists from Annaly Capital Management, Mack Real Estate Credit Strategies and Mesa West Capital in outlining their competitive edges in the space. The chat was moderated by Susan Neuberg, a shareholder at Greenberg Traurig.

Cutthroat competition from lenders of all stripes has reduced returns, but the transitional nature of the assets being financed means that flexibility is still key, Joe Stevens, a managing director at Annaly, said. “We’re lending on business plans. Flexibility in understanding them and helping borrowers execute them is paramount.”

Kevin Cullinan, an executive director at Mack, and Mesa West’s Raphael Fishbach both said surety of execution is one of their top calling cards. The road less traveled is also a smart route, Fishbach said. Mesa West has done some life science and medical office lending recently and “there aren’t a lot of debt funds in that space,” he said.

Next on the docket, panelists discussed the hottest U.S. investment markets, in a chat moderated by Clarion Partners’ Drew Fung.

Chinmay Bhatt, a senior managing director at Berkadia, agreed on the pull of the A-T-X. “The market is getting better and better year after year. We haven’t seen investors pulling back,” he said.

Per Real Capital Analytics data, Austin ranks No. 12 in terms of deal activity this year, with $4.8 billion in investment sales (up 41 percent from last year).

“A lot of companies are opening offices in Austin because it’s got a low-tax environment and a low cost of living,” Doug Faron, a vice president of investments at CIM Group said.

The debt funds have the ability to go higher in leverage than banks, Thomas Whitesell, Pacific Western Bank’s head of real estate, said, but he has concerns around those who jump into the space in order to put money out. “Do they have the capacity and man-power to handle a construction loan?” he asked.

After all, “There are changes and wrinkles in deals, so having a partner you can work through solutions with is important,” Rockefeller Group senior vice president Hilary Goldfarb said.

There are also some much larger wrinkles on the horizon, it seems.

“There are some tricky loans out there,” Gary Block, the chief investment officer at The Meridian Group, said. “Lenders are going higher in the capital stack and taking more risk. We’re starting to get phone calls from mezz lenders asking us to JV on their position because they’re fearful they may have to exercise their remedies. Over the next year you’ll see groups like us coming into the mezz space because of these opportunities.”