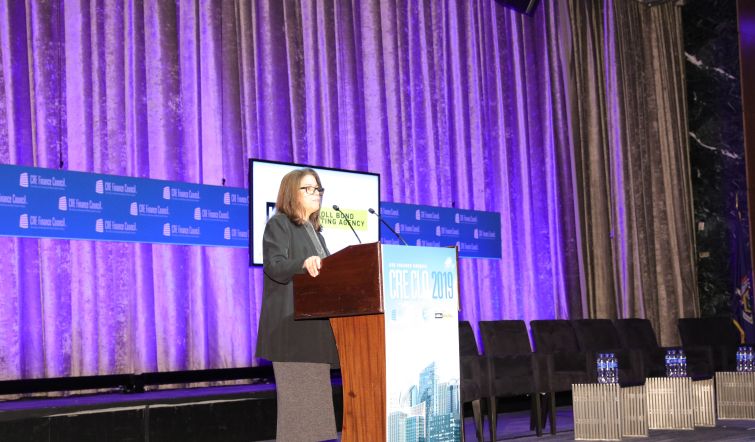 Collateralized loan obligations are basking in their third consecutive banner year, with issuance on track to top $19.3 billion in 2019, according to Kroll Bond Rating Agency, which rates many of these securitizations of transitional loans. If the year runs its course at KBRA’s predicted pace, it’d translate to a 40 percent increase above last year’s summit of $13.9 billion in issuance.

But even so, the mood at the Commercial Real Estate Finance Council‘s conference about CLOs yesterday was ambivalent. Attendees at the event, held at the New York Hilton Midtown on Avenue of the Americas, voiced a variety of concerns about the debt instruments, including questions about whether competitive pressures may leave investors feeling as though they’re offered too little reward for the risk.

CLOs’ increasingly standardized structure is still a time-saving advantage to warehouse-line executions of transitional loans, one attendee observed, because loans funded from a warehouse line have to be evaluated on a one-off basis. But that can be a double-edged sword if the borrower needs to modify the terms of the loan after closing — not such a rare scenario, given that CLO loans are often backed by assets that are not yet stabilized.

Meanwhile, investors are wary of CLO issuers who they view as too permissive towards borrowers. One speaker noted that investors have decisively pushed back against “deemed consent” clauses in CLO deals, an innovation that made it easier for issuers to alter deals with limited investor input. Another alluded to investor frustration with issuers who don’t keep them in the loop about deal developments, lamenting that some issuers haven’t done a good enough job communicating with investors about issues like, for example, a delayed closing.

(CREFC’s restrictive press policies allow reporters to attend conferences only if they agree not to quote or paraphrase identified panelists. A roster of speakers is accessible on the organization’s website, crefc.org.)

Why are some investors growing suspicious? They might be noting signs of a gradual slide in credit quality. Commercial Observer heard at the conference that while deal structure has yet to erode, competitive pressures are driving transitional lenders to be more accommodative both on pricing and proceeds, a trend that sands down investors’ compensation for taking on risk and their cushion if a deal goes awry. There were also whispers of a push on lenders’ part to get issuers to include in CLOs loans backed by properties in lower-tier markets.

Not long ago, the chanciest transitional business plans might only have passed muster if they were attached to assets in premier cities. Now, investors are seeing deals that include such plans on buildings that are farther off the beaten track.

Whether they’re willing to follow issuers to the hinterlands could determine, in part, whether 2020 breaks the CLO market’s growth streak. One group of panelists, asked to prognosticate whether the numbers would be up or down next year, replied with answers that matched the day’s overall disposition.