Lords of Trade War: Why Industrial Investors Aren’t Fretting About a Downturn 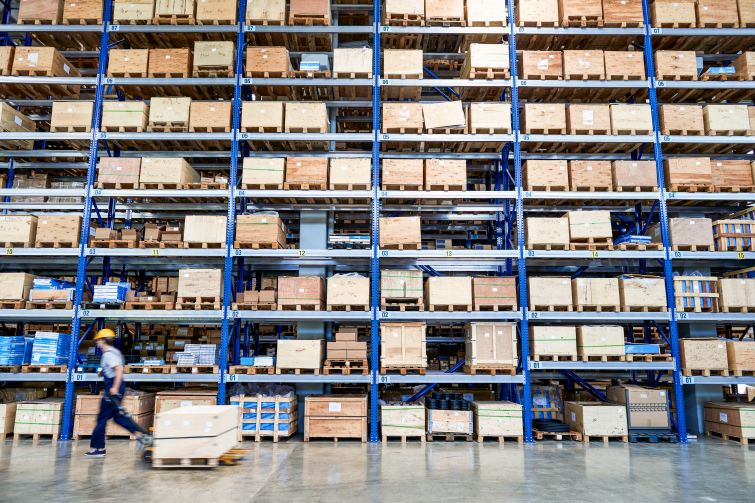 CRATE EXPECTATIONS: Even though consumer goods would be a prime target or more tariffs, logistics owners are flush with confidence. Photo: Getty Images

Keeping tabs on the threats and volleys of the Trump Administration’s trade disputes is its own full-time job. By the Peterson Institute for International Economics’s count, it’s a war being fought on no fewer than five fronts, including skirmishes over intellectual property and clashes about materials like steel and aluminum.

But tariffs on consumer goods from China have proven to be foremost among investors’ concerns when they consider whether the unpleasantness could push the economy into a downturn. The U.S.’s threats in early August to impose additional duties on $300 billion worth of Chinese consumer goods preceded two of the S&P 500’s 10 largest daily losses in history, on August 5 and August 14.

Today, with three-quarters of economists expecting a recession by the end of 2021, according to a National Association for Business Economics survey, you might expect trade-war fears to weigh especially heavily on logistics landlords. After all, no real estate sector is as directly exposed to risk surrounding the $517.36 billion that American consumers spent on online goods last year, not to mention the goods being transported to brick-and-mortar retailers. The industrial segment includes everything from telecommunications centers to manufacturing, but with e-commerce on the rise, warehouses and distribution centers have become the most important component.

Could a slaughter similar to what happened to commercial real estate assets during the recession of 2008 wallop industrial properties if a trade-driven recession breaks out in coming months?

It depends, says Matt Wirth, an Atlanta-based industrial specialist with HFF in Atlanta.

“We don’t know yet what the next recession will be focused on,” Wirth said. “My expectations are that the trade wars will continue for a while. But products are still going to be produced.” If strict tariffs continue to disrupt relations with China, he predicted, businesses from other countries will step in to fill the void, an effect that could serve to dampen any negative effects on American logistics companies.

It’s also worth noting that though discretionary consumer spending accounts for a significant slice of logistics volume, the sector as a whole has staked out an increasingly integral place in the broader economy, which could provide stability during a downturn. Twenty-seventeen was the first year, for instance, that the Port of Los Angeles topped its pre-recession high in metric tons of cargo it handled, a feat that it repeated last year as well. These days, the port handles nearly twice as much shipping as it did in 2000: just shy of 200 million metric tons. And while they don’t match that sheer volume, ports that serve the fast-growing real estate markets in the Sun Belt and the Southeast, such as the Port of Charleston and the Port of Savannah, have been growing even faster.

That commerce has given rise to a blistering acceleration in demand for logistics assets — which has helped mute concerns about whether landlords can maintain strong occupancy levels in souring economic conditions. Analysts often view lease rollovers as a credit negative, because of the potential difficulty in finding a replacement tenant if a recession hits at the wrong time. But rent growth has been so strong for industrial landlords that Howard Schwimmer, the co-CEO of Rexford Industrial Realty, told analysts that leasing turnover had been nothing but a positive for the firm’s portfolio.

“We don’t believe that retention … is a primary metric for us because we’ve been creating so much value by, from time to time, rolling to higher-paying tenants,” Schwimmer said on the July 31 conference call. As of the close of trading on August 28, Rexford shares had jumped by more than a third since the beginning of the year, an impressive rally that mirrors the broader gain by Nareit’s industrial index over that span.

Even though recession fears are being driven by spooky trade headlines, some real estate economists aren’t concerned primarily about industrial properties because they think that trade issues will only affect growth in that sector indirectly. Imports and exports, after all, pale as a share of GDP in comparison with consumer spending and investments. CBRE economist Richard Barkham, for one, is far more concerned about how businesses will react to trade tremors than he is about the tremors themselves.

“What we’re worried about is the trade-related downturn’s translating into a degree of negative corporate sentiment,” Barkham said. “One way is through low levels of capital expenditure, which itself seeps through into the manufacturing sector. Negative corporate sentiment never helps the economy, and that might lead into a mild downturn in leasing.”

In 2008 lenders on commercial and residential assets alike were ravaged by towering leverage levels, which meant that bad loans were allowed to wreak havoc on lenders’ balance sheets and freeze credit across the industry. That phenomenon is likely a minimal concern in the industrial space today, according to Wirth’s partner, Dennis Mitchell. In high-demand markets such as their native Atlanta, a handful of buyers have been so keen to snatch up warehouses that they have even, in some instances, paid cash upfront, cutting leverage out of the picture.

“This is very conservative money that’s just looking for a little bit of yield,” Mitchell said, connecting the situation to globally paltry interest rates. “A lot of the long-term increase in pricing has been driven by the low cost of money.”

Manus Clancy, a CMBS maven at Trepp, said that spreads on moderate-risk debt tranches have widened in the last two months, a reflection that debt investors are demanding more compensation for taking on the risk of lending. But after years of strong performance, warehouses could be in a good position to avoid the worst of the downside.

“Industrial has been a hot segment for a long time — a couple years now,” he said. “If there’s a problem there, it’s probably only in the older stuff that can’t be retrofitted for new uses.”

Logistics centers could be squeezed to an extent by lower shipping volumes in a downturn, but the sector could still be winning ground in its siege on retail profitability even during a recession.

Less shipping “would be a headwind,” Clancy allowed. “But e-commerce is the tailwind. Whatever retail is losing, industrial and logistics are gaining.”

There’s another sense in which a recession could even be a blessing in disguise for the logistics industry. Despite the onrush of automation, warehousing and logistics remain acutely labor-intensive workplaces, according to Mitchell. During the Great Recession 10 years ago, industrial operators suddenly found more applicants for low- and high-skilled jobs alike.

“In [some] pockets where there was a critical mass of bulk distribution, like central Pennsylvania, the population couldn’t support all the labor needs,” Mitchell said. “The recession hit, the unemployment rate went up and it became a lot easier to hire.”

He added, “Of course, though, the better solution is that the community grows and trains its people in a way that supplies the growing demand for labor.”

But as the economy has recovered and labor markets’ tautness has surpassed analyst expectations, logistics firms have once again found themselves squeezed by an oversubscribed workforce and have faced pressure to make expensive plant upgrades to retain talent.

There, he added, warehouses tend to be air conditioned. That’s not yet the case in America, even on his home turf in the sweltering Southeast — but now landlords, and not just their employees, are starting to feel the heat.

“If you want your building to stand out in the competition, you have to have amenities and services,” said Mitchell.