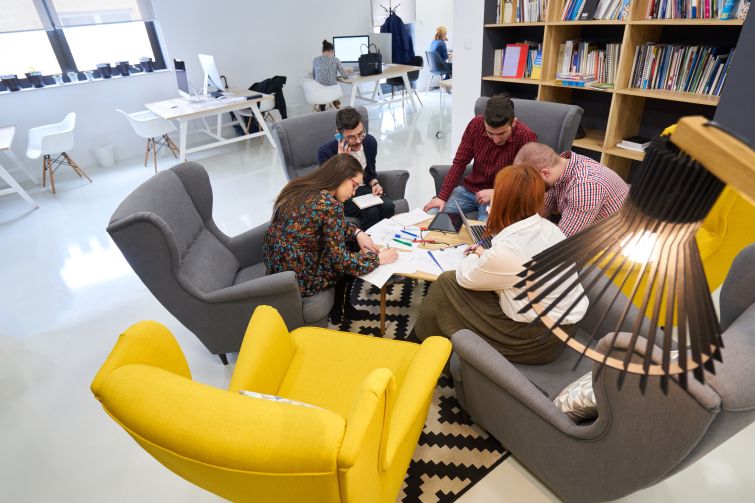 According to a new report from CBRE, “Let’s Talk About Flex: The U.S. Flexible Office Market in 2019,” flexible space leasing makes up 3.6 percent of Manhattan’s total office leasing inventory, compared to less than 2 percent nationwide.

The report provides a comprehensive overview of the most dominant trend in office leasing today: leasing by flexible space providers. The flex space leasing phenomenon is playing out in the country’s top 40 office leasing markets, and will continue to affect tenants, landlords, operators and investors on both a national and regional level.

Nicole LaRusso, director of Research & Analysis for CBRE’s tristate region, also mentions the area’s role in the industry’s origins — a number of the major flexible space providers are headquartered in New York — including the city’s heavy concentration of independent workers and the claustrophobic nature of Manhattan apartments.

“The modern idea of coworking grew out of the financial crisis,” LaRusso said. “As people were getting laid off, they had to be self-employed, or wanted to start new businesses. They looked around their Manhattan apartments and realized, ‘It’s either here or at a coffee shop. Maybe I can do better.’ That’s what really kicked off coworking, and that had an epicenter here.”

Manhattan’s flexible office space footprint has more than tripled since 2014, reaching 15 million square feet as of H1 2019 and growing 9.5 percent since year-end 2018. This flurry of activity will see flex space accounting for approximately 15 percent of overall leasing activity through year-end 2019. This massive expansion is credited to larger corporate users embracing the phenomenon.

“There are a class of tenants in growth mode who don’t have a real estate department, and they’re concerned about growing fast,” said LaRusso. “They’ve been drawn to the opportunity to have their real estate problems solved for them quickly, with no hassle. Also, if they need to go from 100 people to 300 people in a month, they just need to get into the space. The idea of being able to pull the trigger with very little downtime has driven a lot of larger companies into the market.”

Class A office space is clearly the preference for flex space tenants nationwide; only 38 percent of flex space was in Class B or C buildings. To that end, Manhattan (where CBRE doesn’t track office buildings by class) has seen less-desirable space converted to flex. Anecdotally, many of Manhattan’s lower-class buildings are benefiting from the high levels of buildout and the opportunities for branding that come with flex operator leases.

“This market has benefited from having a lot of new office space delivered throughout this recovery period, and we’ve seen companies in the market take advantage of these new opportunities to upgrade to the best-quality space,” said LaRusso. “This migration has left availabilities in less-desired buildings, where there isn’t necessarily a lot of demand. That created an opening for flex providers to seize a lot of that space, often at very favorable rents. We saw this at first in the Downtown market, but it has continued and occurred elsewhere, including in Midtown.”

Flex providers in Manhattan are looking to engage in new partnership models with landlords, given that while traditional leases are most prevalent today, some institutional landlords are getting more comfortable with more innovative lease structures. The report mentions four different types of arrangements and levels of partnership between landlords and flex space operators, along a continuum from “traditional,” which includes a basic long-term lease; “partnership,” with profits and loss shared between operators and landlords; “operating agreement,” meaning the operator receives a fixed management fee; to “captive,” where the landlord operates as their own flex space provider.

“The question I get more than anything else from landlords is, what other ways are there to do business with flex space operators than just lease them my space?” explained LaRusso. “A lot of landlords have explored all the different ways they can share more in the upside rather than leasing to a flex provider.”

With a possible downturn or even recession on the minds of many, the prospects for flex space, in either event, look to be similar to those of traditional leased space.

Flexible office space has become a prominent component of building owners’ and corporate occupiers’ real estate strategies and a permanent fixture in New York’s office leasing market, and will therefore survive, perhaps even thrive, during a downturn. The report notes that while a recession could negatively impact demand for flex space, many operators will lower their cost basis through renegotiated leases and collaborations with landlords.

Christelle Bron, Americas Agile Practice Leader for CBRE, said, “A recession will affect the supply-and-demand dynamics of the flexible office market just as much as it will the traditional market.

“Small companies might suffer, but a somewhat equal number of them could be formed. Volatile large companies might leave their flex space first, but also might opt for the convenience and lease-term flexibility of flex space as their leases roll. Stable, large occupiers will pounce on redoing their real estate at the bottom of the market, creating a surge of activity. And flexible providers who have structured their leases with an eye toward managing their risk will weather the slow-down in demand.”

If there were to be a recession, flex space has been integrated into the office market to the point where its effect in downtimes will be similar to traditional office, although this may become more extreme as greater recent profits make the segment susceptible to cyclical swings.

Rent increases from the trough in larger markets have been twice those in other markets, reaching as high as 50 percent. This increases the potential for cyclical swings, requiring teamwork between operators and landlords to bridge the gaps between rents and member prices.

Nationwide, while flex space is still just under 2 percent of U.S. office inventory, that supply grew by 39 percent in 2018. It could, under the report’s baseline, mid-growth scenario, make up 13.3 percent of flexible office supply in the U.S. by 2030.

Overall, CBRE sees the flex space phenomenon as a boon for both New York’s office leasing industry and the industry nationwide in the years and decades to come.

“The demand for flex space has really juiced the market here in New York in particular — it’s absorbed a lot of commodity space where we didn’t see tremendous demand from end users. Without flex space, we might have seen availability in that segment go into some uncomfortable areas,” said LaRusso. “But flex is a phenomenon that everyone accepts at this point. People are holding their breath to see what happens in a downturn, but our house view is that the demand for flexibility on the part of the end user is legitimate and growing.”

Bron agrees that the rise of the flexible space sector has forever changed the office landscape. “Commercial real estate has never before had an empowered consumer who can immediately change their mind, and their location, when they find something that fits their needs better,” she said. “An empowered consumer is a catalyst for innovation. Things are about to get interesting.”