Wages are up and there are 91,000 more people in construction than a decade ago, but electricians, welder and ironworkers seem to be disappearing 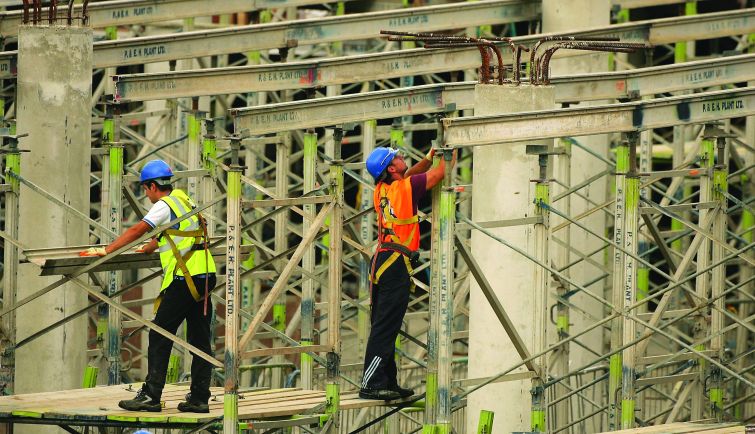 More workers are in the construction biz than ever, so why is there a labor shortage? Photo by Scott Barbour/Getty Images

New York City is the most expensive place to develop in the U.S., and it’s hard to ignore the fact that rising labor costs, along with a shortage of qualified workers for certain tasks, are making it even pricier to build every kind of project, from office buildings to apartments.

New York is a union town, and experts estimate that the union construction trades still handle half of all major construction projects in the five boroughs. This makes sense because the unions are basically guaranteed the contracts for large public developments, including construction at LaGuardia and John F. Kennedy International Airports, hospitals, New York City Housing Authority buildings, as well as work on roads, bridges and train tunnels. Public infrastructure spending reached $19.5 billion in 2018, according to a report from the New York Building Congress, which accounted for slightly less than a third of all construction spending last year.

“When you look at public projects — roads, schools, MTA — the cost of those projects have continued to go up and continue to go up [in] an unchecked fashion,” said Brian Sampson, the head of the New York chapter of open shop contractor group Associated Builders and Contractors. “You have to pay prevailing wage on public works projects, but the government has no control over the prevailing wage. The union contractors get together and negotiate it with the union, and it’s posted with the Department of Labor.” (Open shop contractors use both union and non-union labor, while “closed shop” or union contractors only employ union workers.)

With an average salary of $80,200, construction was the fourth-highest paying job sector in New York City in 2017, the latest year for which data is available, according to a May report from the New York State Comptroller’s Office.

And there’s no question that there’s a nationwide construction labor shortage. Sixty-one percent of contractors said it was difficult to find skilled workers over the past few months, according to a national quarterly construction survey released by U.S. Chamber of Commerce last week. New York City, however, has fared much better than most of the country, because of its 4 percent unemployment rate and constantly growing skilled workforce. Employment in construction reached a record of 398,400 workers in 2018, having added 91,600 jobs since the Recession-era nadir in 2010.

However, a labor shortage may be coming in the “higher-skill” and higher-paying trades that require more training, including electricians, welders and iron workers.

“I think what’s happening is that a lot of people who are in the trades are older and getting to retirement age, and [the unions] can’t seem to get people to go into those trades,” said Richard Lambeck, a professor of construction management at New York University’s School of Professional Studies Schack Institute of Real Estate. “It seems like the unions and the non-union [contractors] are having trouble finding people who can come into the construction industry primarily to work.”

And because contractors are doing so much construction right now — roughly $60 billion in 2018 — skilled workers in certain trades are harder to come by, Lambeck noted. And as the number of people employed in certain skilled trades shrinks, those workers will be able to demand better pay, especially at the collective bargaining table.

He added that he noticed more women and people of color becoming general laborers, which encompasses foundation and excavation work, as well as general heavy construction, over more specialized trades like welders, electricians or pipefitters.

Tariffs are also pushing up the price of construction materials like aluminum, steel and glass. Those costs are factored into labor by contractors and are pushing up construction costs overall, Lambeck said.

Sampson, who represents contractors who use both union and non-union labor, agreed that the declining number of people entering the construction workforce could trigger a crisis.

“There are fewer people entering into the construction trades, because our [high] schools are not incentivized to send people into the trades,” said Sampson. “They’re graded-based on the number of people they send to two- and four-year schools. We as an industry have not done a good enough job about educating people about the pathway into the middle class that the construction industry can provide.”

He also said that the Department of Labor (DOL) caps the number of apprentices allowed on a construction site, which limits the number of people than can enter apprentice programs, both for union and non-union workers.

“[DOL] wants to restrict the number of apprentices because they are typically paid a lower rate and a lower benefits package, and that has a negative impact on the pensions for the building trades,” Sampson explained.

Although he acknowledged that non-union workers will always earn less, he argued that an impending contraction in the construction labor force will push open shop employers to continue raising wages.

“We definitely have a workforce issue today and a bigger one in two or three years when half the construction workforce will reach retirement age. So, if you’re an employer who’s not paying good wages and good benefits, you’re not getting workers. We’re continuing to see the hourly wage go up and the addition of benefits into the equation.”