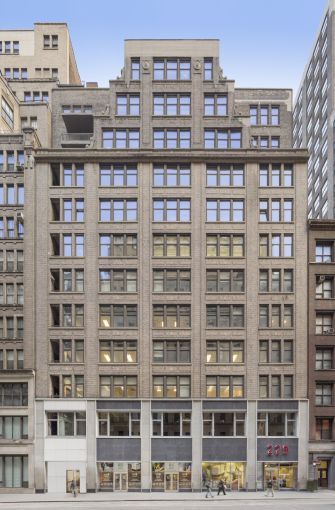 Investcorp International Realty, in partnership with Brickman, have nabbed $112 million from the Canadian Imperial Bank of Commerce (CIBC) to refinance previous debt on two Midtown office properties, according to city records filed yesterday.

The deal refinanced previous acquisition debt from MetLife used to purchase the properties in a portfolio sale in 2017. The package also included a $6.2 million project loan, a $10.8 million building loan mortgage and a $3 million gap mortgage, records show, which will more than likely be used to fund closing costs and any additional improvements to the building.

A Cushman & Wakefield team led by Gideon Gil, along with Noble Carpenter III and Emily Johansen, represented the borrowers in arranging the transaction.

The owners paid New York REIT just under $156 million for the properties—256 West 38th Street went for $63.3 million, while 229 West 36th Street sold for $93.5 million—on Nov. 6, 2017, aided by a roughly $106 million package from MetLife, according to information from CoStar Group. The combined price equated to just over $583 per square foot. The pro forma cap rate at the time of the sale was just under 5.2 percent.

Built in 1921, the 12-story building at 229 West 36th Street comprises 151,204 square feet and was last renovated in 2004, according to CoStar. Renovations to the building included the expansion of the width and height of the physical structure of the lobby, an upgrade to the lobby’s entrance, the installation of a building canopy, roof replacement and new bathrooms on all available floors, among a few other improvements, according to CoStar.

As for tenants, a Nordstrom studio occupies over 12,600 square feet on the sixth floor on a lease that was established on Aug. 24, 2016.

The 14-story, 116,159-square-foot office at 256 West 38th Street was built in 1924 and is 100 percent leased to tenants such as office management and organization firm Lane Office, which occupies 16,500 square feet across the fifth and sixth floors, and human rights organization Physicians for Human Rights, which has leased just over 8,000 square feet on the ninth floor as its headquarters, according to CoStar. The building was last renovated in 2014.

Brickman is responsible for the property leasing and management of the two assets.

CIBC officials were not available to comment before publication. Officials at both Investcorp and Brickman did not respond to inquiries.

This story was updated to include that Cushman & Wakefield arranged the debt for the borrowing party.