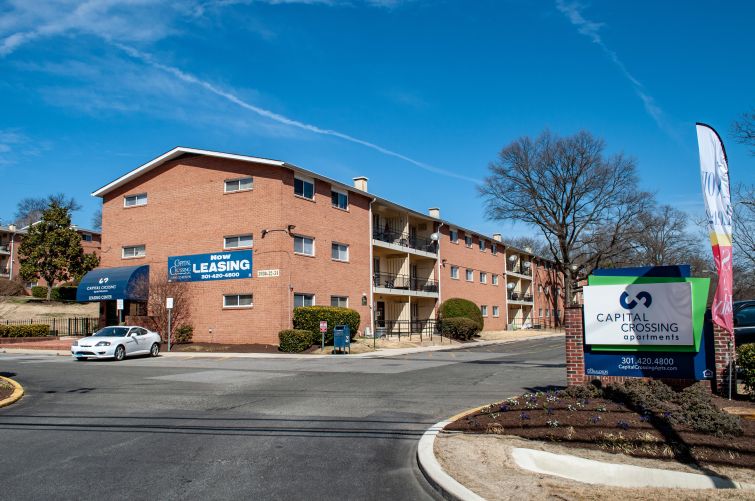 Castle Lanterra has acquired Capital Crossing, a 359-unit multifamily garden-style community in Suitland, Md., from Hampshire Properties, for $52 million, according to Transwestern Commercial Services (TCS), which represented the seller in the deal.

Located at 3930 Suitland Road, approximately one block from the D.C. border, Capital Crossing consists of 15 multifamily buildings that are about 96 percent occupied.

“Because of Capital Crossing’s attractive occupancy and location, the property had a highly competitive bidding process,” Elie Rieder, Castle Lanterra’s CEO, said in a prepared statement. “Castle Lanterra’s existing relationship with the seller gave our firm a competitive edge, which allowed us to ink a deal with a strong basis that provides us with downside protection.”

According to Rieder, the new ownership plans to undertake an extensive renovation campaign that includes upgrading the building entrance and laundry rooms with new paint and flooring, installing a key fob access system, outfitting the community clubroom with new furniture and creating an outdoor kitchen with landscaped picnic areas.

Built in 1960, the community mostly includes one-, two- and three-bedroom units sized up to 1,080 square feet. Amenities include a dog park, playground area, a community center and a fitness facility.

Capital Crossing is located in Prince George’s County, which has led the state in job growth for five consecutive years. The property is centrally located to more than 83 million square feet of office and industrial space and major business centers, and within five miles of nearly 19 million square feet of retail, shopping centers and restaurants.

The location also provides direct access to both Suitland and Naylor Road Metro stations, Interstate 495 and 95.

According to Williams, low vacancy and strong historical rent growth have positioned Suitland as one of the region’s strongest and most consistent performers, and he and his team have sold seven apartment communities in Prince George’s County in the past 12 months.