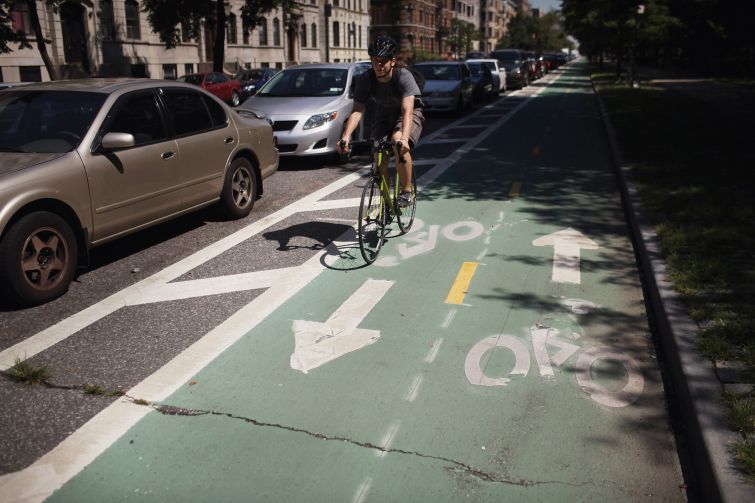 The one constant in New York City is that space is scarce. And that extends to the streets.

“Our streets are more congested than ever,” the Department of Transportation conceded in a report last month, with frenetic competition mounting between cars, cyclists, pedestrians, box trucks, Ubers, scooters, and bike messengers.

The congestion has had a toll. Or, to be more exact, a death toll.

As of September, 19 cyclists have died this year on New York City streets, almost double the total of 2018. A shocking 14 of the fatalities were in Brooklyn, the highest number recorded since at least 2008, according to data from the DOT. The percentage of Brooklyn fatalities this year is nearly double its average proportion in past years.

In response, Mayor Bill de Blasio in July unveiled the Green Wave, a $58 million, five-year plan to make the city safer for cyclists, by accelerating the number of bike lanes added each year, redesigning intersections and ramping up enforcement.

The move is part of the city’s decade-long embrace of cycling as an alternative form of transit — one that largely tracks the arc of Brooklyn’s rise from outlying borough to thriving Manhattan rival. That borough-wide overhaul, much of it driven by real estate development in traditionally industrial areas, created a need for a transit infrastructure that connected previously far-flung areas like Sunset Park and Greenpoint, for a younger, less car-dependent generation.

The rise in cycling in New York City during that time has been dramatic, as has been the increase in bike infrastructure. Between 2000 and 2017, the number of daily bicycle rides more than tripled to nearly half a million a day, or 179 million trips a year, according to DOT data, with the real uptick beginning around 2006.

Since that year, the city added 750 miles of bike lanes, adding to an existing 500. In 2007, the first protected bike lane was installed along Ninth Avenue in Manhattan; in 2013, the Citi Bike bike-sharing program launched; and in 2014, de Blasio initiated Vision Zero, a plan to eliminate all traffic fatalities by 2024, by implementing better road design and infrastructure for pedestrians, cyclists and drivers.

Real estate development in the boroughs and cycling infrastructure have largely been synergetic. At least some of the increase in cycling was a result of development in areas that were not traditionally residential. “Places like Dumbo, and the Williamsburg and Greenpoint waterfronts, don’t have a lot of access to subways,” said Dave Lombino of Two Trees Development, one of the most active developers in those areas. “They could never have reached the density of development where they are now without cycling taking hold and becoming more and more popular.”

Andrew Kimball, CEO of Industry City and former CEO of the Brooklyn Navy Yard, said he supported the bike lane around the perimeter of the Navy Yard back when cycling infrastructure seemed less inevitable.

“We knew that today’s kind of makers and innovators that were populating — from a tenant point of view — places like the Navy Yard, and now Industry City, tended to be younger, live nearby and prefer to bike to work,” he said.

But while the waterfronts have transformed, in many formerly industrial areas the infrastructure has not kept pace with development. And it’s in those areas that commercial traffic, everything from box trucks to tractor-trailers, are highly active and drivers are unaccustomed to sharing the road.

Sunset Park, where Industry City is located on Third Avenue between 32nd and 37th Streets, is illustrative of this changeover. Still heavily industrial, the area has been a target for bike activists and the city for years, as it attracts more commercial and residential traffic.

On New Year’s Day, 26-year-old deliveryman Hugo Alexander Sinto Garcia was riding an electric bike down Third Avenue near 28th Street in Sunset Park when he crashed into an open car door, and was hit by a passing car, according to news reports. In July, 30-year-old artist Em Samolewicz was cycling along the same stretch when she swerved to avoid an open door and was hit by an 18-wheel semi-trailer truck, reports said.

Third Avenue, made up of eight car lanes and no bike lanes, is especially dangerous for bikers given the poor visibility because of the Gowanus Expressway overhead and its support beams obscuring the field of view, according to a statement from Transportation Alternatives, a safety advocacy group, in response to Samolewicz’s death.

“Streets like Third Avenue are incompatible with Vision Zero,” the statement said. “To eliminate traffic deaths, these deadly corridors which are dedicated 100 percent to moving and storing vehicles must not be allowed to exist in their current form.”

Plans for the neighborhood include a protected bike lane one block over on Fourth Avenue, a corridor connecting South Brooklyn neighborhoods to Downtown Brooklyn; an extension of the Greenway along the waterfront; and Citi Bike expansion into the area by 2020.

After Samolewicz’s death in July, DOT moved up the schedule for the Fourth Avenue bike lane, promising to finish it by the end of the year.

While developers are not responsible for roads, they have a major impact on the built environment of the city. “If you’re developing land in a place that is changing and you have much more foot traffic and bike traffic, there ought to be incentives to add safer rights of way,” said Joe Cutrufo of Transportation Alternatives.

At the moment, the only cycling-related requirement for developers is to provide bike parking in some commercial buildings. But there is precedent for developers to work with the city on transit related issues, particularly parking, which can hugely influence the number of cars on the road.

“We’ve been active in trying to draw down parking requirements, which generally just encourages people to use cars way beyond what’s necessary,” said Lombino. “When we were designing Domino, we demonstrated to DOT officials that the demand to drive to office space in Brooklyn was in decline.”

In Downtown Brooklyn, the developers of an apartment tower at 80 Flatbush received waivers to reduce the minimum parking requirements because of their proximity to transit, and a former plan for a parking garage near Willoughby Park was scrapped for the same reason, said Regina Myer, president of the Downtown Brooklyn Partnership.

In addition to parking, Avery Hall has a stake in the transit plans for the Gowanus rezoning. The firm has a development property above the subway station at Fourth and Union Avenues. Ezra said he’s proposed a plan to improve the station in order to accommodate the increase in ridership the rezoning will bring. He also proposed that the city offer a density bonus in exchange for providing transit upgrades, an arrangement that has precedent.

Ezra said he hadn’t considered extending that to cycling, but that as a cyclist himself, he understands the need for better infrastructure.

“Part of how I got my start in real estate was by being a cyclist,” he said. “It’s how I started scouting sites.”

Developers may not be the ones that make the decisions on transportation, but it’s undeniable that the two are intertwined. Or, as Cutrufo says, the going phrase at Transportation Alternatives is, this: “The best transportation plan is a good land-use plan.”