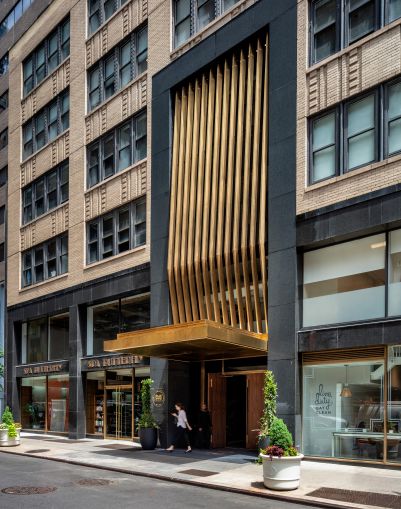 A shot of the new entrance for 10 Grand Central at 155 East 44th Street. Photo: Marx Realty

The 10-year, interest-only loan carries a rate of 3.99 percent and a loan-to-value of just 30 percent.

“The recent improvements to 10 Grand Central, coupled with its proximity to Grand Central Terminal, made this financing opportunity of great interest to many potential lenders,” Kohn, the vice chairman and president of equity, debt and structured finance for C&W, said in a statement provided to CO.

Marx set out in July last year to revamp the 35-story property with a $45 million renovation. With the redevelopment, the building’s entrance moved from Third Avenue to East 44th Street, where it fronts at 155 East 44th Street with a four-story entryway.

The 438,000-square-foot building was built in 1931, and the company wanted to stay true to its origin, recreating an old-school, 1930s New York feel. That features a “white-gloved” doorman attending the lobby, an area that will sport circa 1920s and ’30s art.

Marx relocated around 80,000 square feet of tenancy in order to widen the scope of the renovation as much as possible, as CO previously reported. The work included 10 prebuilt office suites, ranging from 2,500 to 8,000 square feet.

Studios Architecture was tapped to redesign the lobby and the entrance, and it also created new amenity space and a 3,000-square-foot seventh-floor outdoor terrace.

“What’s happened over the years [is] people changed the building and modified it in a way that wasn’t true to the original intent,” Marx Realty president and CEO Craig Deitelzweig told CO during an October tour of the building. “What we are trying to do is be authentic to his original design aesthetic but do it in a modern way.”

The redevelopment has spurred a lot of interest from prospective and existing tenants. In the last year, Marx has sealed around 160,000 square feet of leasing, Deitelzweig told CO.

The property is now 91 percent leased and Deitelzweig said that could be 94 percent by the end of this week. It houses a mix of tech, medical, financial and entertainment tenants.

With the renovation, the chief executive said the company has opened the property to the “large universe of tenants,” meeting the needs for “an insurance company or a brand-conscious financial firm or a tech company that wants collaborative space.”

In July 2018, the month the renovation started, Benenson Capital Partners jumped to renew its 15,000-square-foot lease, signing a 10-year deal to keep its offices on the 27th through 29th floors.

In March, Association of National Advertisers expanded its footprint at the property to 52,000 square feet, from 41,000, on a 15-year deal, as first reported by the New York Post.