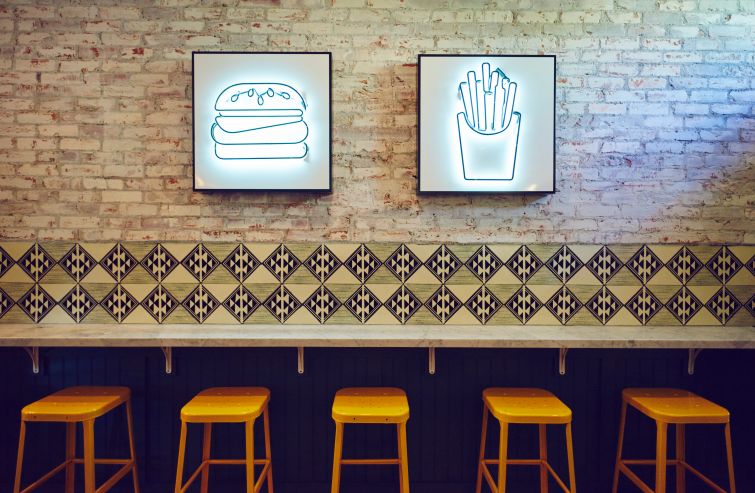 By Chloe interior. Photo: By Chloe

Who needs an Impossible Burger when you can get a tempeh-lentil-chia-walnut patty instead?

The burger is By Chloe’s signature offering, and it will now be available at even more locations, as the vegan-casual eatery continues its expansion. The restaurant is adding three new locations in Manhattan, including a to-go counter in Midtown East, Commercial Observer has learned.

The popular plant-based brand opened a new 1,700-square-foot location at 1385 Broadway in Midtown in early August, according to information from By Chloe. It signed leases for two additional locations, which are scheduled to open in October of this year; the eatery took 1,650 square feet at GFP Real Estate’s 27 Union Square West, on the corner of West 16th Street, and a 1,200-square-foot storefront at Boston Properties’ office tower at 399 Park Avenue, from where they will operate their first to-go counter.

“The new format will enable guests to pre-order and pick-up more efficiently, making it a perfect stop for lunch or dinner during the busy workday,” Patrik Hellstrand, CEO of By Chloe, said via email, of the 399 Park location.

The to-go restaurant will be located on East 54th Street between Park and Lexington Avenues. The block-through building, which also has an address of 630 Lexington Avenue, was recently redeveloped with new storefronts, said Steven Soutedjnik of Cushman & Wakefield, who, along with Cushman’s Molly Sendza, represented the landlord. Taryn Brandes of Brand Urban Real Estate represented the tenant.

The fast-casual vegan eatery has been on a growth spurt, in part fueled by funding from Kitchen Fund which also invests in several other fast-casual healthy options including popular salad chain Sweetgreen, gluten-free Indian eatery Inday, and grain bowl eatery Cava. The brand, which already has several locations in London, plans to open its first Canadian store in Toronto in the fall.